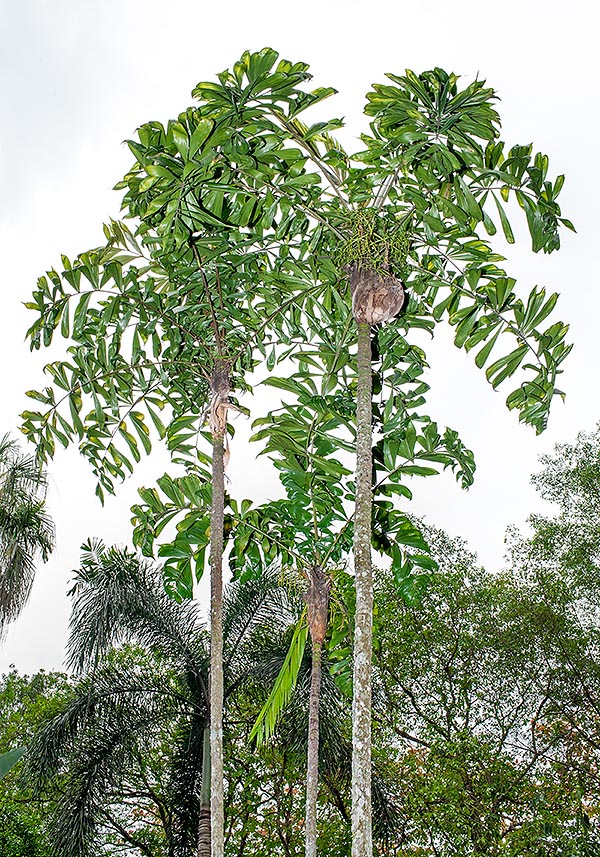 The species is native to eastern Madagascar where is diffused in the humid forests from the sea level up to about 1500 m of altitude.

The origin of the generic name is unknown, the specific name is the Latin name “nodifer, era, erum” = provided with nodes, with possible reference to the foliar scars on the stem.

The Dypsis nodifera Mart. (1849) is an unarmed monoecious species with single stem, 2-10 m tall, with a diameter of up to 6 cm at the base, thinned towards the apex, of green colour in the youngest part, greyish in the oldest one, on which are visible the rings trace of the junction of the fallen leaves. Paripinnate leaves, on a short petiole, slightly arcuate, up to 90 cm long, with oblong-ovate pinnules with long pointed apex, irregularly arranged on the rachis in groups of 2-6 and inserted at different angles, in the median part 12-34 cm long and 1,5-4,5 cm broad, of intense green colour. The leaf base wholly wraps the stem for a height of 15-30 cm forming a sort of a tubular capital of green grey colour with microscopic purple red scales, thicker in the terminal part.

The inflorescences, on a 10-30 cm long peduncle, generate between the leaves (interfoliar) enclosed in the initial phase of growth in a deciduous reddish brown bract, 20-90 cm long with (2)-3(-4) orders of ramifications. The flowers are unisexual and arranged in groups of three (a female flower between two male ones), of red colour when in bud, and have the phenomenon of the proterandry, the male flowers ripe before the female ones, thus avoiding the self-fecundation and favouring the crossed one.

Ellipsoid fruits, about 1 cm long and of 0,7 cm of diameter, containing only one ellipsoid seed, 0,7 cm long and of 0,5 cm of diameter, ruminated (the perisperm inserts into the endosperm) in depth. Species vey similar when adult to the Dypsis pinnatifrons, distinguishable with certainty only from the male flowers, that present 6 stamina, instead of 3, and for the fruits as the endosperm is ruminated and not homogeneous. It reproduces by seed, previously kept in water for three days, in aerated and draining loam maintained humid at the temperature of 22-24 °C, with germination times of 1-4 months.

Species of undoubtful ornamental characteristics cultivable in the tropical and humid subtropical climate zones, as does not bear temperatures close to 0 °C if not exceptional and for very short time. It prefers a shady to semi-shady position, particularly during the juvenile phase, and is not particular about the soil, provided well drained and maintained almost constantly humid, but without stagnations.

Thanks to the contained size and the elegance of the foliage, the young specimens are an excellent subject to cultivate in pot, in loam rich of organic substance with addition of agri perlite per a 25%, for the decoration of open spaces, where the climate allows so, or of greenhouses, verandahs and winter gardens, in even poorly luminous situations, with lowest temperatures not under the 14 °C and ambient humidity around the 60%.

The species has a certain importance for the native populations, the fruits are at times consumed locally, and also are much appreciated the vegetative apices, the “palm hearts”, and from the pollarded plants they get a sugary liquid for a fermented beverage. The young stems, reduced to longitudinal stripes, are utilized for cordages and fishing nets, the leaves as livestock forage, the pinnules to create hats. The straight stems of the adult plants, divided lengthwise in half, are still now employed in the local constructions of walls and floors, being long lasting. Though still widespread in the wild, the several uses that entail the death of the plant, together with the reduction of the forests in favour of the agriculture, could drastically reduce its presence in the near future.