The Echinocereus reichenbachii subsp. fitchii N.P. Taylor (1997) is native to USA (Texas), and to Mexico (Nuevo Leon and Tamaulipas), where it grows in the thin brushwood along the banks of the Rio Grande.

The name of the genus is the combination of the Greek word “echinos” = hedgehog, with reference to the globose shape of some plants belonging to the genus, and “Cereus”; the species is honoured to the German botanist Heinrich Gottlieb Ludwig Reichenbach (1793-1879), the subspecies to William R. Fitch, assistant to the American botanist Joseph Nelson Rose (1862-1928).

Globose to cylindrical plant, solitary or caespitose, with stems with dark green epidermis which usually, when cultivated, is not taller than 10 cm and has a diameter of 6 cm, even if old specimens in the wild can reach a height of 40 cm and a diameter of 10 cm. It has 10-20 thin ribs, slightly spiralled, and hinted tubercles with, at the apx, elliptic areolas spaced about 0,5 cm. The areolas are provided with 12-30 radial white thorns with dark apex, 3-10 mm long, and 1-7 central thorns, thin, white and variously coloured from the yellow to the bright red, 2-10 mm long.

The flowers, slightly perfumed, originate from the areolas of the apical zone, are funnel-shaped, 5-12 cm long and with a diameter of 12 cm, of magenta colour with darker centre; have a 25 mm long ovary on which are distributed areolas provided with thorns and white down and obovate petals with sharp apex and serrated margins. 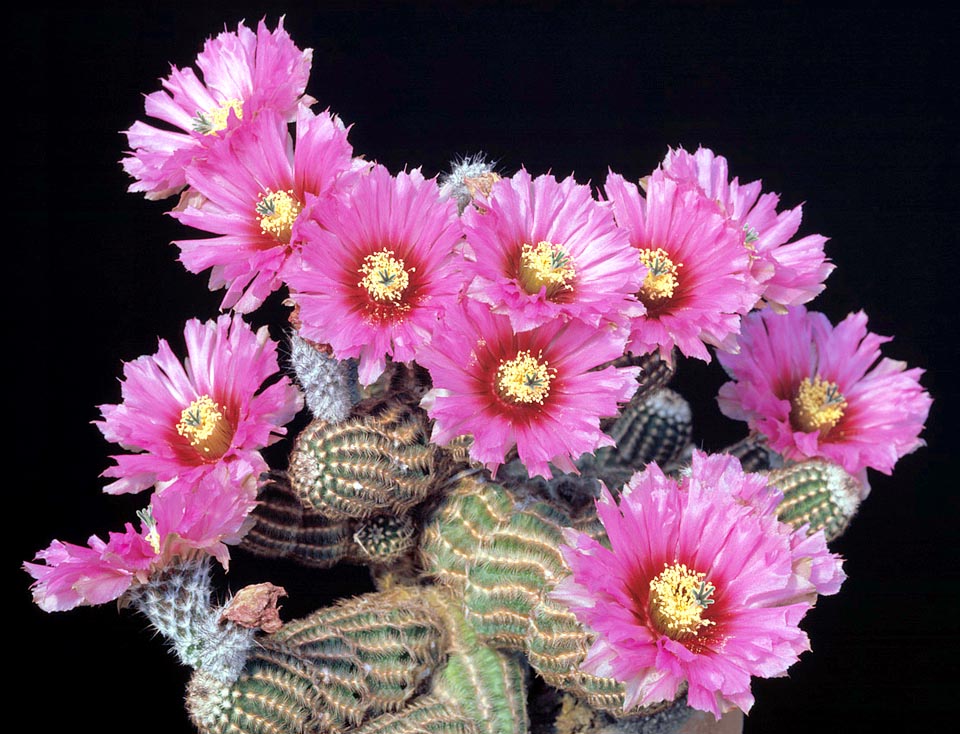 Echinocereus reichenbacchi subsp. fitchii, native to Texas and Mexico, is very appreciated by collectors due to the reduced size, fast growth and showy flowers © G. Mazza

The fruits are globose, greenish, and contain several seeds. It reproduces by division and easily by seed, in which case it blooms starting from the second year of age.

Much appreciated plant by the collectors thanks to its reduced dimensions, the velocity and facility of growth and the huge and showy flowers. It is to be cultivated in full sun, or, however, at the maximum possible luminosity, on particularly draining moulds which can be formed by about the 50% of common manure garden earth and for the rest, in equal quantity, by sand (agri-perlite) and crushed stones without dust.

It has a high resistance to the dry cold, as it can bear, for short time, temperatures as low as -10/-12 °C, but not the humid cold which can easily cause rottenness. Therefore, in the climates characterized by humid winters, it is to be sheltered and kept dry at temperatures between 5 and 10 °C, whilst in summer it is to be regularly watered, but allowing the soil to dry completely before giving water again.