The Echinopsis atacamensis (Phil.) Friedrich & G.D. Rowley (1974) is native to north-western Argentina and southern Bolivia, where it grows in the high valleys and along the rocky slopes of the Andean range between the 2000 and 3500 m of altitude, often being the predominant vegetation.

The name of the genus is the combination of the Greek words “echinos” = hedgehog and “opsis” = look, with obvious signification; the name of the species “atacamensis” = of Atacama, refers to its place of origin, the desert of Atacama. 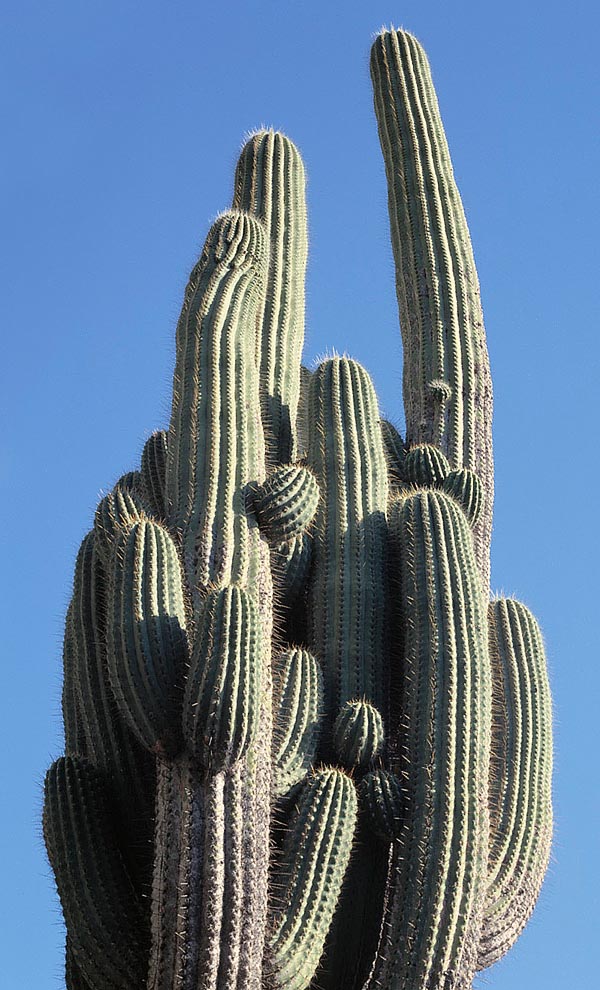 Echinopsis atacamensis grows in Bolivia and Argentina between 2000 and 3500 m of altitude. Source of fruits and wood for natives peoples, can be 8-10 m tall with 50 cm basal stems © Giuseppe Mazza

Impressive, columnar plant, little ramified, 8 to 10 m tall, with a main stem which at the base can reach a diameter of 50 cm and lateral club-shaped stems with a diameter reaching the 30 cm when close the apex.

The stems have even more than 30 pale green ribs, about 2 cm tall and close brown areolas furnished of several robust and rigid thorns, of a length which can vary up to about 12 cm, grey to brown red in the young plants, tall up to about 1,5 m, whilst in the upper part of the older specimens the thorns become thinner, flexible and of a white or yellow colour.

The funnel-shaped flowers, about 15 cm long, blossoming by the evening and keeping open for 18-40 hours, originate at the top of the stems and are white with ovary and tube covered by long blackish hair.

The edible fruits are globose, with a diameter of 3-5 cm, green coloured and covered by reddish thorns, containing several small black seeds. It reproduces by seed, at an optimal temperature of 20-25°C, or by cutting.

Slow growing plant, but remarkably spread in its origin area, which has had for centuries a considerable importance for the inhabitants of these semi-arid zones, being practically the only source of fruits and wood available in loco.

They consume both flowers and fruits, called pasacana, whilst the lignified part of the stems is widely utilized for building, realizing frames, furniture and common usage things, and still nowadays is utilized for making handicraft mainly meant for the touristic market.

It is to be cultivated in full sun, or anyway at the maximum possible luminosity, on particularly draining soils which can be formed by about the 50% of common manure garden earth and for the rest, in equal proportions, by coarse sand and crushed stones without powder.

It has a high resistance to the dry cold, as it can bear, for short time, temperatures down to -10°C, but not to the humid cold which can easily cause rottenness.

Its ideal collocation in open air, when the climate allows so, is in the vast “desert” gardens, together with other xerophytes, elsewhere it is to be cultivated in pot with the same modalities described before. Therefore, in the climates characterized by humid winters, it is to be kept sheltered and dry at temperatures between 5 and 10°C, whilst in summer it is to watered regularly, but allowing the mould to dry up completely before giving water again.

Echinopsis atacamensis was last modified: May 7th, 2018 by Giuseppe Mazza