The Echinopsis thelegona (F.A.C. Weber ex K. Schum.) Friedrich & G.D. Rowley (1974) is native to north-western Argentina, provinces of Jujuy, Salta and Tucuman, where it grows on the slopes of the eastern cordillera in semi-arid areas almost devoid of vegetation, or in association with thorny bushes, characterized by dry warm climate with marked thermal excursion, both daily and seasonal, and poor rainfall concentrated in the summer season.

Caespitose, little ramified plant with dark green, semi-erect stems, but, more frequently, procumbent and rooting on the ground, with the extremity slightly curved upward; it is one of the two columnar cacti, being the other one the Stenocereus eruca of North America, with a creeping positioning. Usually, the stems are 1-2 m long, but in the wild it is possible to find remarkably longer ones, with a diameter of 7-8 cm, with 12-13 broad ribs, rounded, with prominent tubercles, with almost hexagonal section, 5 mm tall and spaced of about 12 mm. The areoles at the apex of the tubercles are rounded, downy, equipped with 6-8 radial thorns, 1 to 2 cm long, with the lower ones slightly longer, and a central thorn up to 4 cm long; the thorns are of a pale brown colour, tending to the grey with the age, often darker at the apex. 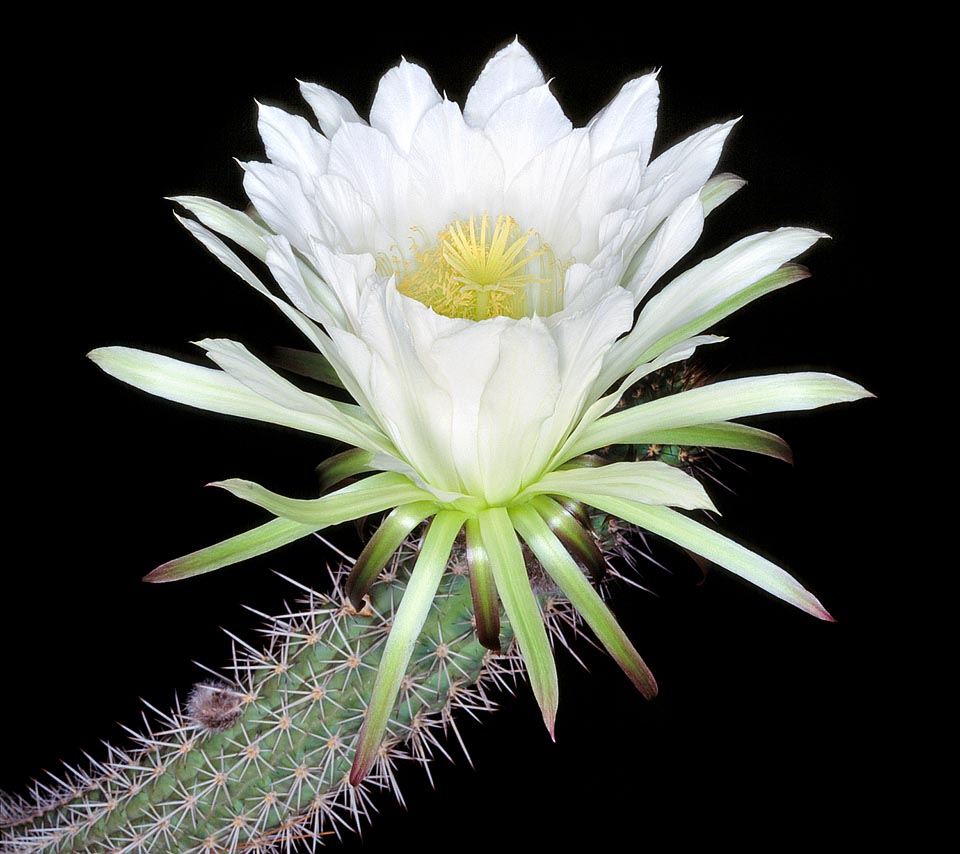 Native to north-western Argentina, Echinopsis thelegonia is a columnar cactus with creeping posture. At the end forms a cespitose tangle of stems, 7-8 cm broad, semi-erect but frequently procumbent and rooting on the ground. In nature easily pass the 2 m of length. The flowers, of about 15 cm, open the night and fall early morning © G. Mazza

The flowers, gently perfumed, open the night and keep open until early morning, are funnel-shaped, up to 20 cm long with a diameter of 15 cm, white with greenish external tepals and floral tube provided with bristles and blackish hairs. They fruits are almost globular, with a diameter of 5 cm, tuberculate and covered by down, of a yellow to red colour, which, when ripe, open on the sides and contain several black seeds. It reproduces by seed and cutting, left to dry up well, in summer.

Cactus whose particular characteristics can be fully appreciated only if placed in broad “desert” gardens where its serpentine stems can freely grow. It requires full sun, or, in any case, the maximum possible luminosity, and particularly draining soils which may be formed by common fertilized garden earth, coarse sand and crushed dust-free stone in equal parts. Even if it bears, when completely dry, temperatures of a few degrees under 0° C, it is advisable not to expose it to temperatures under this value, especially if in presence of high humidity. Watering must be moderate in summer and interrupted in winter; this limits its cultivation in full air to locations with mild and dry winters, unless appropriate temporary shelters are not prepared. The possible cultivation in pot is to be done with the same aforementioned modalities.

Echinopsis thelegona was last modified: May 7th, 2018 by Giuseppe Mazza