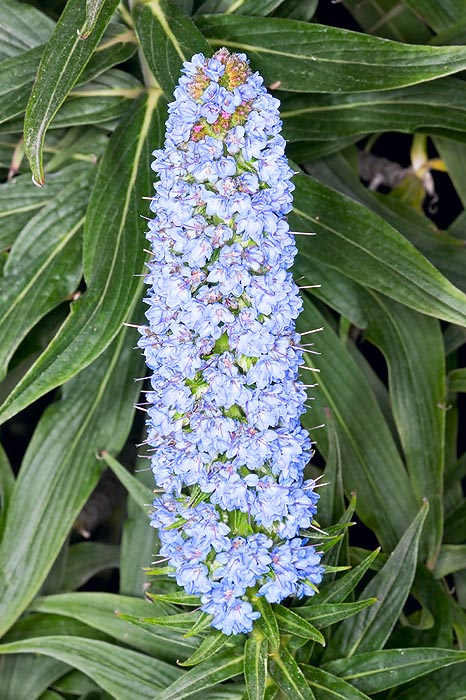 The inflorescences may be 45 cm long. Excellent nectar for bees © Mazza

The Echium candicans L. f. (1782) is native to the Madeira archipelago, where it grows along the coastline and in the rocky hilly slopes.

The name of the genus comes from the Greek “échis”= viper, after some due to the shape of the inflorescences, after others after the belief that the plants belonging to this genus would be efficacious against its bite; the Latin name of the species “candicans” = whitish, refers to the whitish tonality of the tomentum covering almost all parts of the plant.

Biennial evergreen shrub, or often short-lasting perennial, much ramified at the base, usually about 1,5 m tall, but can, at times, reach and overcome the 2 m, with whitish-grey villous branches and lanceolate, 6-20 cm long and 1-4 cm broad, tomentose, leaves, of a green-grey colour, assembled on the terminal part of the branches.

The inflorescences are conical, 15-45 cm long, terminal, panicles with a compact multitude of funnel-shaped flowers which remain open for some weeks, 5-9 mm long and 8-12 mm broad, with a 5-lobed corolla, with a colour from azure to violet blue and pink stamina. The fruits contain 4 ovoid, 2-3 mm long, seeds.

It easily reproduces by seed, semi-woody cutting and propagation. Starting from the seed, on the first year it produces a rosette of leaves, on the second it ramifies and blooms at the apex of the branches; in the plants behaving as perennial, the top of the blossoming happens usually during the third and forth year of age, then it tends to become less showy and for this reason many suggest to renew the plant when at this stage.

Plant of great ornamental and landscape value, to be cultivated in full sun, on even poor soils, very draining and rather arid, suitable for gardens and rocky slopes on coastal zones in Mediterranean climates with rainy winters and warm and dry summers, when in these situations it practically does not need attentions, with no or rare summer watering, as the winter rains are sufficient.

Not particular for the soil, as it can grow both in the acidic and alkaline ones and is resistant to the wind and the sea aerosols, is, on the contrary, rather sensitive to the low temperatures, loses its leaves when around -2°C, and dies around the -4/-5°C.

The nectar of the flowers attracts many butterflies and bees, and the honey produced is of very good quality. In some places, it is considered as a possible pest, due to the facility with which it reproduces by seed, and the capacity to cover ample areas.

It is, finally, to be kept in mind that the contact with leaves and branches can be irritating for the skin of particularly sensitive individuals.

→ To appreciate the biodiversity within the BORAGINACEAE family please click here.