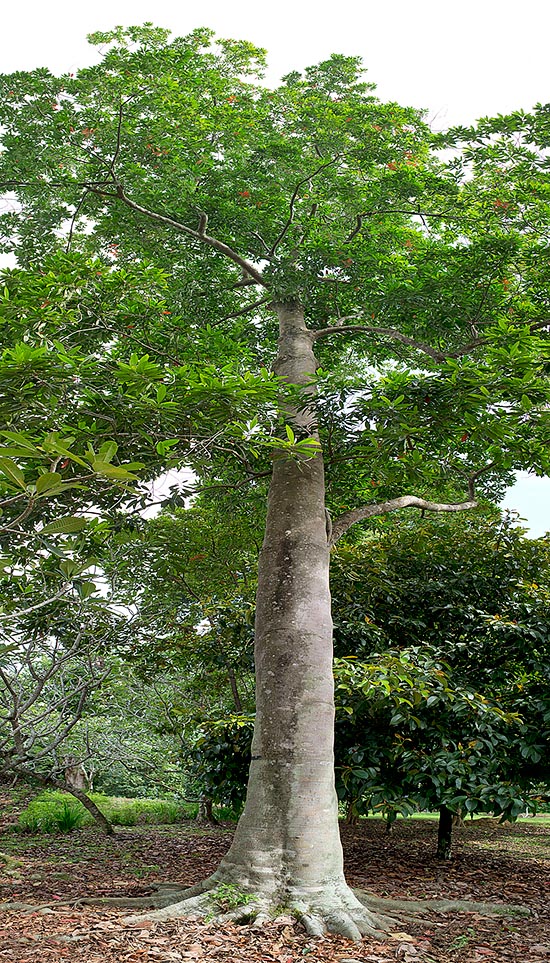 The species is native to Australia (Queensland), Cambodia, China (Guangxi, Hainan and Yunnan), Fiji, Indonesia, Malaysia, Myanmar, Nepal, New Caledonia, North-eastern India and Thailand where it grows in the evergreen pluvial forests between 200 and 1300 m of altitude.

The Elaeocarpus angustifolius Blume (1825) is an evergreen or briefly deciduous tree that may reach the 35 m of height with erect trunk, up to more than 1,5 m of diameter, provided at the base of tabular roots (flat roots similar to buttresses that contribute in the support of big trees) and grey-brown bark; the young branches are brown-yellowish and villous.

The leaves, grouped at the apex of the branches on a 1-2 cm long petiole, are alternate, simple, oblong-lanceolate, 8-16 cm long and 2-4 cm broad, with finely serrated (serrulate) margins, apex obtuse to pointed and prominent veins, of glossy dark green colour turning red before the fall.

The inflorescences, 3-10 cm long, are racemes produced at the axil of the leaves as well as on the most recent bare part of the branches, bearing numerous drooping hermaphroditic flowers with 5 lanceolate sepals, villous, about 1 cm long and 2 mm broad, of pale green colour, corolla with 5 petals slightly longer than the sepals and about 5 mm broad, of cream white colour, finely fringed for a part of their length, stamina in variable number, 25-50, about 0,5 cm long, and tomentose ovary with 5 loculi (rarely 7).

The fruits are globose drupes, of 1,8-2,5 cm of diameter, of bright blue colour when ripe, rare in the vegetal world, that slowly turns grey with the time and finally black; the thin pulp is is edible, but with sour taste, it is therefore consumed with addition of sugar, or used for jams.

The unusual metallic blue colour is not due to the presence of pigments in the cuticula, in this case anthocyanins, but to an iridescence caused by its particular micro-structure, formed by layers of cellulose that interfer with the luminous radiation inside the blue (wavelength around the 430 nm), whilst they are almost transparent with higher wavelengths, this allows the light to penetrate into the deepest layers. The fruits have globose endocarp, hard and finely wrinkled, that can contain up to 5 (-7) seeds (one per loculus), even if usually they are less, of about 1 cm of length.

It reproduces by seed, previously immersed in water for two days, in draining loam maintained humid at the temperature of 24-26 °C, with germination times varying from some months to more than one year. 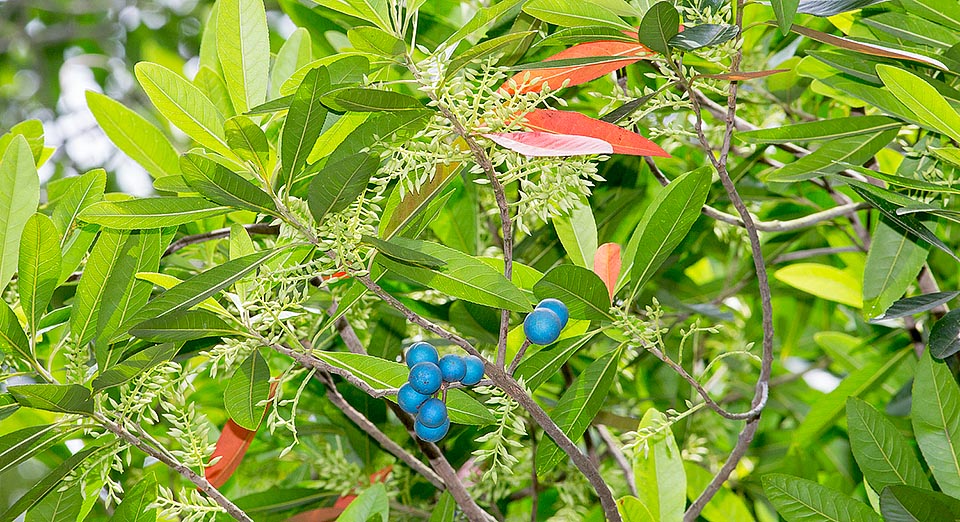 Imposing tree of fast growth that blooms and fructifies abundantly, occasionally utilized as ornamental and as shade tree in the tropical, subtropical and marginally warm temperate climate zones. It grows in full sun, excepting the initial phase of growth where a slight shade is preferable, or in partial shade, and is not particular about the soil, even if poor, slightly acidic to slightly alkaline, provided well draining and mainteined humid, even if when adult it can resist to drought periods. The wood, clear and light, has a limited use for furniture, inner parts of boats, light carpentry in general and in the plywood fabrication.

Bark, leaves and pulp of the fruits are utilized since remore times in the Indian traditional medicine for various pathologies; the tree, considered sacred in India, has furthermore an important rôle in the religion and superstitions of the local populations, in particular with the endocarp (called in Sanskrit rudraksha) are made garlands and rosaries to which are attributed particular virtues. 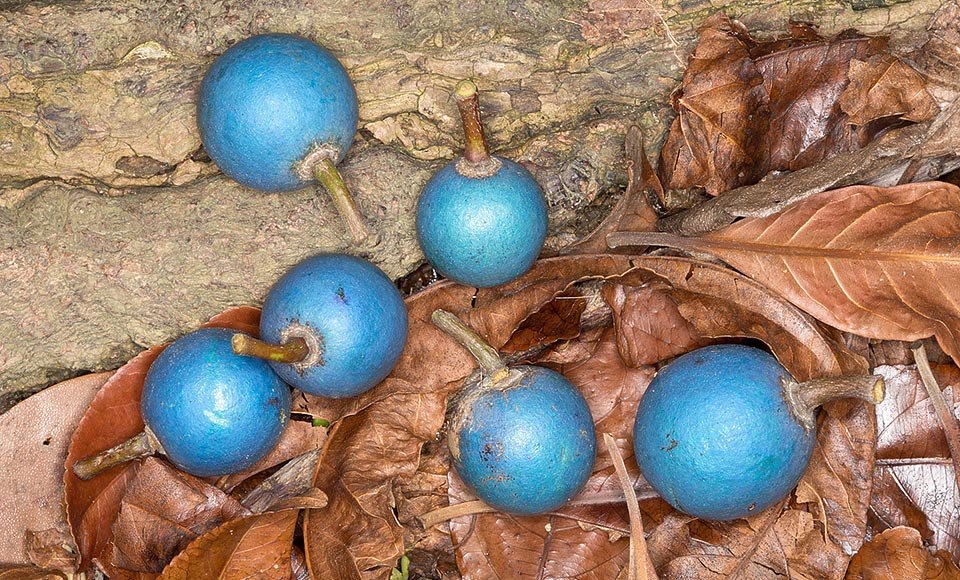 The edible fruits are globose drupes of 1,8-2,5 cm of diameter. The odd metallic blue colour is not due to the presence of pigments, but comes from iridescence of the particular microstructure of their cuticle. Bark, leaves and pulp of the fruits are used since remote times in the Indian traditional medicine for various pathologies © Giuseppe Mazza

The fruits are an important food source for many frugivores, that contribute in the dissemination, whilst the leaves are part of the diet of the Lumholtz’s tree-kangaroo (Dendrolagus lumholtzi Collett, 1884).

→ To appreciate the biodiversity within ELAEOCARPACEAE family please click here.