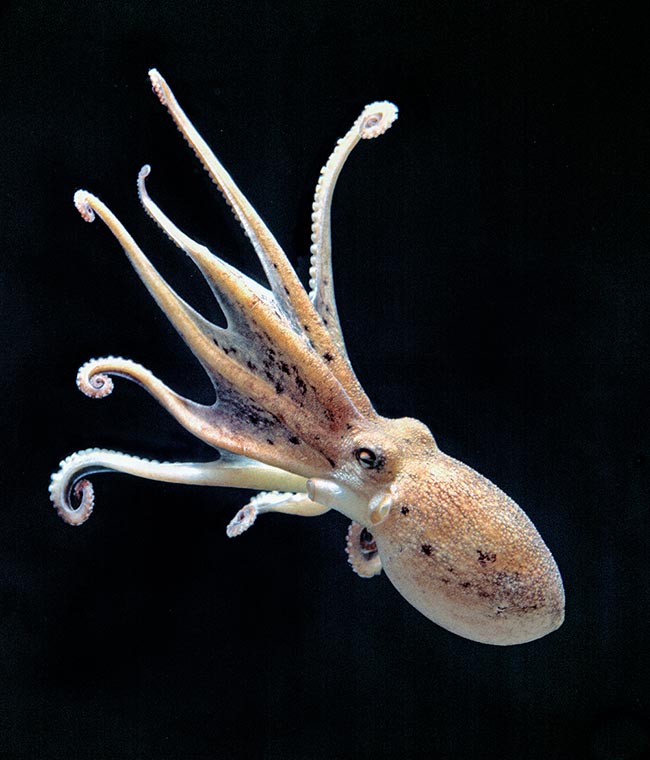 The Musky octopus (Eledone moschata Lamarck, 1798)   is a cephalopod belonging to the order of the Octopoda, animals known as standing among the most intelligent of the vast Phylum of the molluscs.

They manifest a fascinating and evolved psychology and several studies of the animal behaviour have confirmed their capacity of learning complex activities and emotional associations.

From the many families that branch out from this group, those of Eledonidae, to which the Musky octopus belongs, is one of the most known among the fishermen and the lovers of seafood seen its centuries-old tradition in the Mediterranean cuisines, with bibliographic evidence dated back to 1800.

The genus Eledone, comes from the Greek “ἐλεδώνη” (heledṓnē), a variant of “ἑλεδώνη” that simply means “name of mollusc”. This epithet has been later on compared with “δελεδώνη” (deledṓnē) = type of food, suggesting an etymology of pre-Greek origin.

The specific name moschata comes from the Latin “moschatus” = scent similar to musk, as this small mollusk, when just fished, emits a particular musk scent due to the presence of some glands it has under the skin. Because of this characteristic, in Italy it is commonly known as moscardino, polpo moscato (rightly, musky octopus) or mughetto.

The Musky octopus is a typical mollusc of the Mediterranean where it lives as a non-migratory and endemic species.

Its distribution in the Atlantic Ocean is limited to the western coast of Gibraltar Strait and of the Gulf of Cadiz in Spain, reaching the southern coast of Portugal. Only recently its presence has been reported also in the Aegean Sea and in the Gulf of Gabès.

The ideal habitat of the Musky octopus is the sandy or muddy bottoms comprised between the 10 and the 500 m of depth, where it spends a sedentary life, sunken into the substrate to escape from the predators during the diurnal hours.

Conversely, during the night it transforms in an active predator of a large quantity of marine species such as crustaceans, other molluscs and small fishes, catching them while lying in ambush under the sand or with rapid jumps, possible thanks to an adjustable siphon capable to expel water, thus guaranteeing a jet propulsion useful for hunting as well as for escaping. 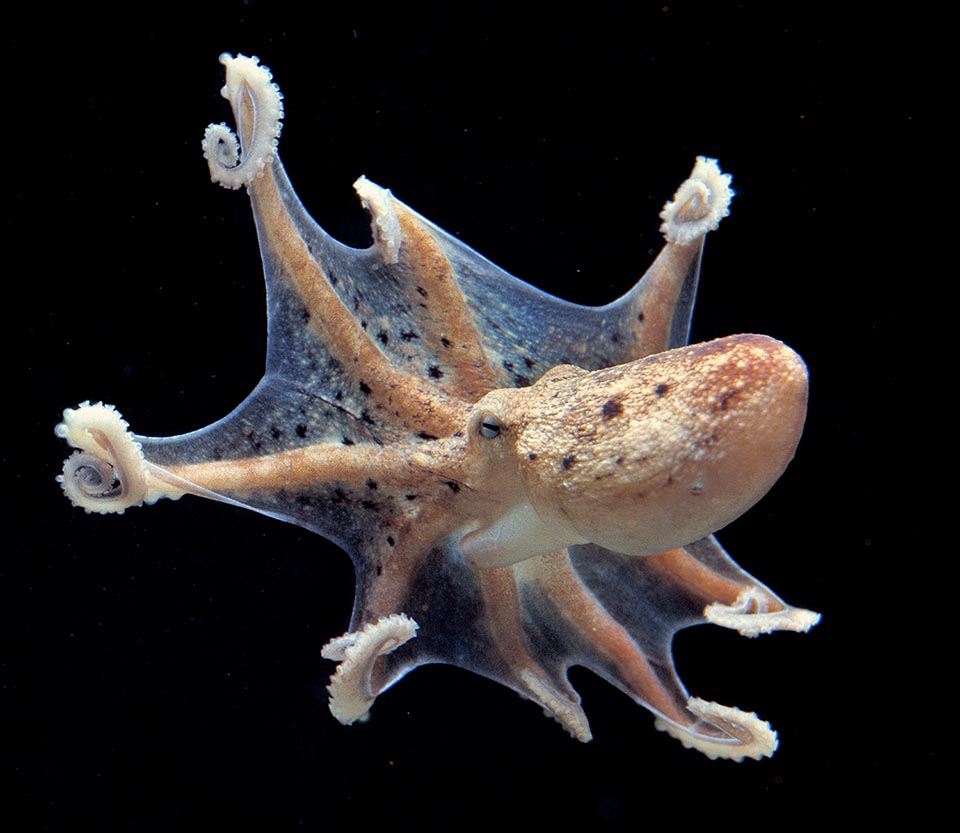 Much smaller than Octopus (Octopus vulgaris), distinguishes for the presence of only one row of suckers on each tentacle and rarely exceeds 20 cm, with a 74 cm record © Giuseppe Mazza

By night it gets close to the coast, but it is difficult to find it at low depths. The intense trawling impoverishes the resources of the sea bottoms, the continuous background noises of the boats and the unceasing erosion of the coasts done by the man are the main factors of departure of the species from zones very important for hunting.

Although it is easy to imagine how this species results to be very important for the demersal fishing of the Adriatic, the studies about its biology and ecology are quite poor.

Generally mistaken with the better-known Common octopus (Octopus vulgaris), with whom it shares many of the anatomical features, it however distinguishes due to the presence of only one row of suckers on each tentacle.

The number of the tentacles is very important for distinguishing the Octopodiformes, like the Musky octopus and the Common octopus, with eight arms, from the Decapodiformes such as the Cuttlefish (Sepia officinalis) and the Common squid (Loligo vulgaris) that, besides having eight arms, do have also two longer tentacles. 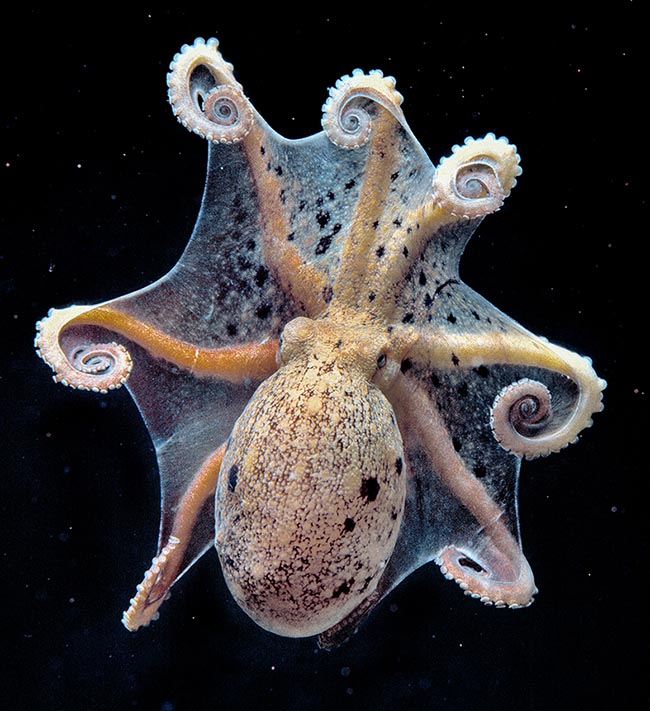 The livery of Eledone moschata appears mottled, brownish with grey brownish reflections and some blackish or dark brown spots on the back. During the night hours it is possible, also, to see a bluish iridescent running along the body and the tentacles.

In dimensions they are reduced, with a maximum length of 74 cm and an overall weight of 1,5 kg, but it is quite common to meet smaller ones measuring about 15 or 20 cm.

The head is well developed with slightly protruding eyes, the mouth surrounded by tentacles is furnished with a long spiny tongue called radula (present in all molluscs but in the bivalves) and teeth shaped like a parrot’s bill, necessary for crushing tissues or carapaces of the preys.

Like all cephalopods, also the Musky octopus emits a black liquid similar to ink, stored in a sac, that, in conditions of danger, is freed in the surrounding environment thus creating a cloud useful for confusing the view to the predator.

The ink is also utilized in the intraspecific struggles for frightening the competitors during the mating period.

The Musky octopus is a shy and solitary animal, but thanks to its opportunistic behaviour it is able to adapt very well to extreme life conditions characterized by different environmental, ecological and climatic parametres. In fact, when the preys are scarce, it can feed of carrions or animal remains found on the bottom, as well as to carry out cannibalism, thus managing to compete effectively with selective animals.

In optimal conditions, this species nourishes prevalently of crustaceans like sand crabs and hermit crabs, of small molluscs such as the sea scallops of the genus Clamys, mussels and small squids; moreover, are predated also sand fishes like mullets and cods of the genus Trisopterus.

The main predators are the dolphins and the cartilaginous fishes that, thanks to th echolocation of the first ones and to sensory organs called Ampullae of Lorenzini in the second, are in condition to localize and seize the prey without using the eyesight, thus eluding the cryptic colour of the Musky octopus.

Eledone moschata reproduces on the deep bottom mostly during the winter and spring period and most of the sexually mature specimens are observed during the months of January and February. 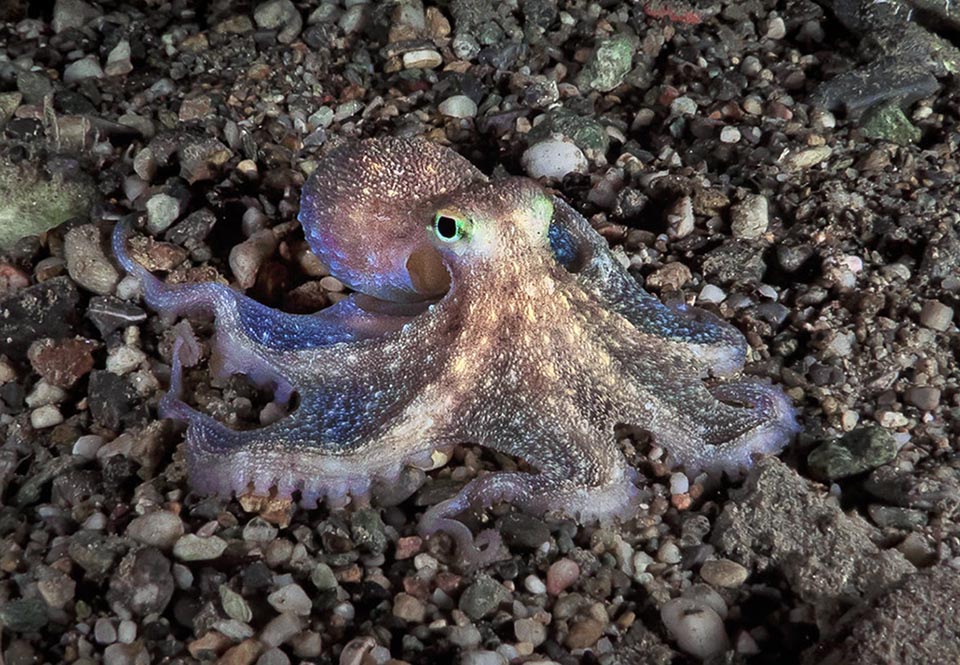 Shy and solitary, spends the day hours hidden on the sandy or muddy bottoms at 10-500 of depth, often just emerging, in order not to be seen by predators. It goes hunting the night, and the brownish livery, with grey brownish reflections and irregular dark spots, enlightens of an iridescent bluish line that runs along the body and the tentacles © Maurizio Pasi

Common to all male cephalopods is the modification of one of the tentacles, for reproducing purposes, that carries or collects the spermatophores to implant into the female and that gets the name of hectocotylus. It is curious to think how this name has been given to the hectocotylized arm when it was thought that the same was a sort of parasitic worm.

While mating the male holds the female with its tentacles and lays the sperms thanks to the hectocotylized arm into the oviduct of the female under the mantle where the fecundation will take place.

The fecundated eggs are stuck by the females to a solid substratum (rocks or big bivalves such as Pinna nobilis) surrounded by gelatinous capsules that, when in contact with the watery harden and expand leaving around the egg an empty space to oxygenate it.

From the eggs will develop already autonomous young resembling to the adults.