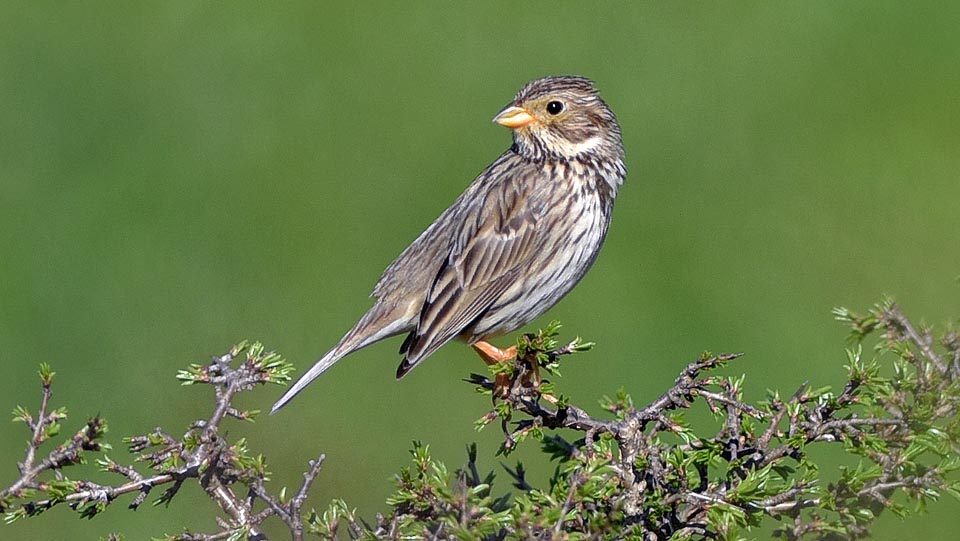 The Corn bunting (Emberiza calandra Linnaeus, 1758) belongs to the order of the Passeriformes, to the family of the Emberizidae and is the biggest bunting among the numerous Euro-Asian families.

Already from the odd name given in the Italian language, referred to the indecipherable song it emits during the mating season that resembles more to a messy and jarring shriek than to a courting warbling, we can understand what is the particular characteristic that strikes at the first contact of this bird. 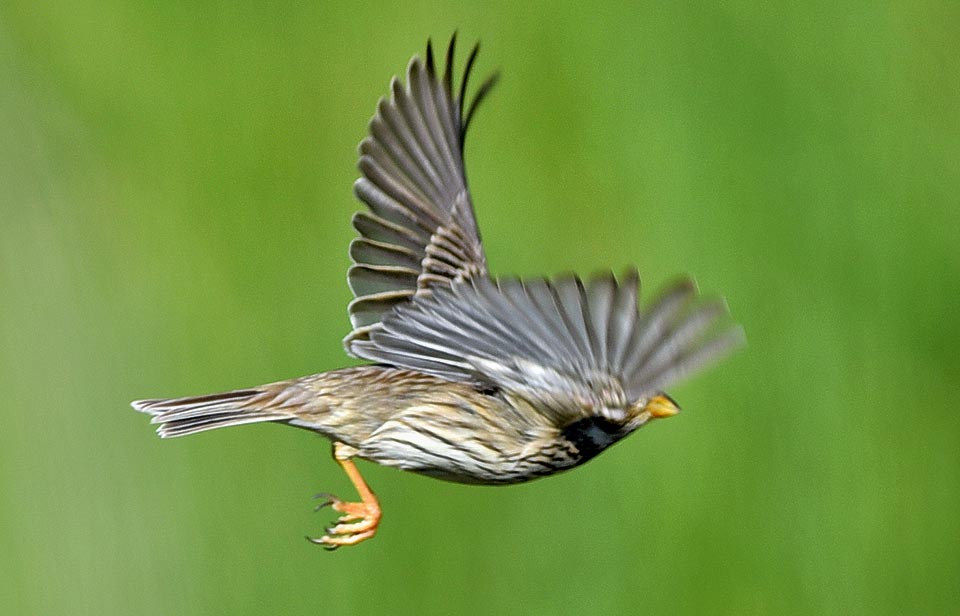 At first a sparrow, it is easily recognized due to its particular way of flying with hanging legs and very fast flutter not developing speed © Gianfranco Colombo

Always in northern Italy, it is locally called ciuciaraìss that has nothing to do with the literal translation from the Lombard dialect meaning “succhia radici” (suck roots) but rather from the onomatopoeic reference that repeats faithfully its sound. The Brits, who combine to the most popular birds names or sentences that trace faithfully their song, have connected the corn bunting to the saying “jangle keys” that, repeated, exactly reflects this very strange cry.

The etymology of the scientific name gets origin, for the genus Emberiza, from the old German embritz as were called generally the buntings whilst the species calandra from the Greek kalandros, lark or Calandra lark (Melanocorypha calandra). 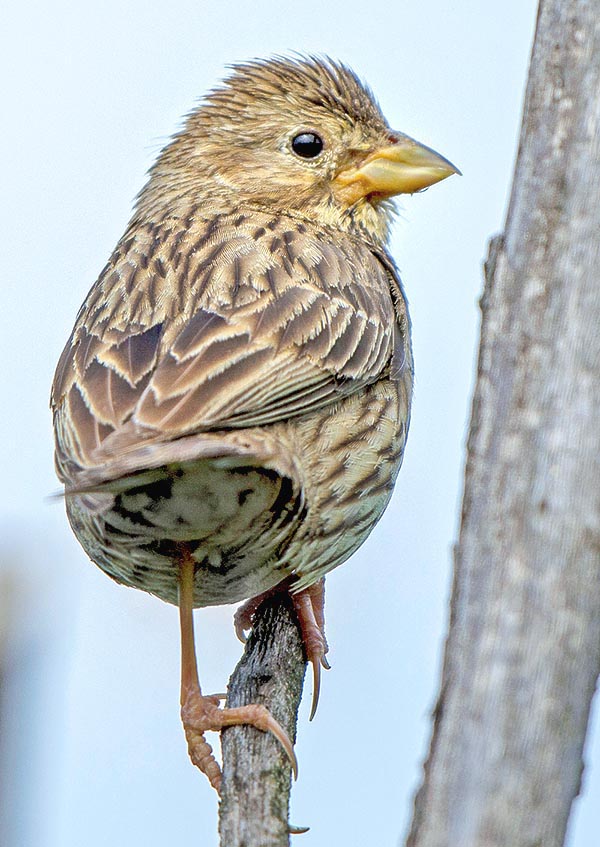 The misuse of the term lark to indicate the bunting, gets its origin from an old habit that saw the hunters of birds selling in winter to naive customers these buntings, pretending them to be larks, much more expensive and rare in that season.

Nowadays many locate the corn bunting in the genus Miliaria instead of Emberiza reclassifying a term initially considered as a synonym.

Miliaria comes from the Latin term “milium” = millet, with reference to the birds, probably the corn buntings, that were fattened in cages feeding them with this cereal to be then consumed by the gourmets of yore. Tradition that in France has lasted till the last century.

The corn bunting is called in Italian Strillozzo; in French, Bruant proyer; in German, Grauammer; in Spanish Escribano Triguero and in Portuguese Trigueirao.

The corn bunting has a very vast territory including totally Europe, Asia and the African part north to Sahara. It has no difficulty to stand the rigid climates of the extreme north and the burning Central Asian and North African climates and to adapt to any altitude even if it does not surpass the 2000 metres. It is absent in Iceland though it is found easily in the European and Asian continents at well higher latitudes.

In most of the territory it is practically sedentary apart seasonal short range errations, in the northernmost quadrants is instead subject to long range latitudinal migrations in order to avoid the winter conditions of these areas.

Very often these migrations are sudden and abrupt and are done in substantial flocks moving from one area to another to avoid sudden and strong snowfalls, that unfailingly cover the ground rendering impossible the research of food or persisting of unbearable temperatures.

It is a bunting that has suffered a strong decrease during the last decades disappearing completely from some European continental areas but also from islands, Atlantic as well as Mediterranean. In Italy it is still common and well diffused even if in vast areas of the Po Valley, due to the intensive monocultures and the disappearance of stable meadows, it has much rarified and in some areas has practically disappeared. 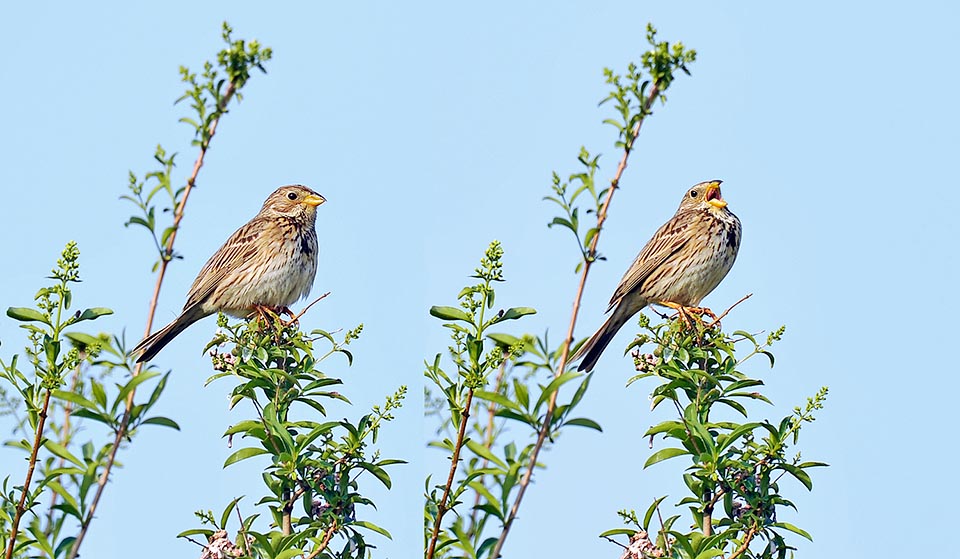 More then singing, the bunting male shrieks. Very territorial bird and polygamous at same time, spends most of the day in lookout on top of its choice shrub. Careful controls the territory, is heard but is ready for furious pursuits of the birds daring to enter its pastures or disturb the females and the nests © Gianfranco Colombo

The corn bunting is inseparably linked to grassy moors, to hay meadows as well as to uncultivated lands, possibly scattered with low shrubs but dominating the underlying prairie. It loves a lot the steep road sides, cereal fields, steppe and dry hills with sparse bramble and hawthorns thickets, stony and dry bank of rivers where, besides finding the suitable environment for nesting, it finds the supports needed for staying in lookout over its territory. 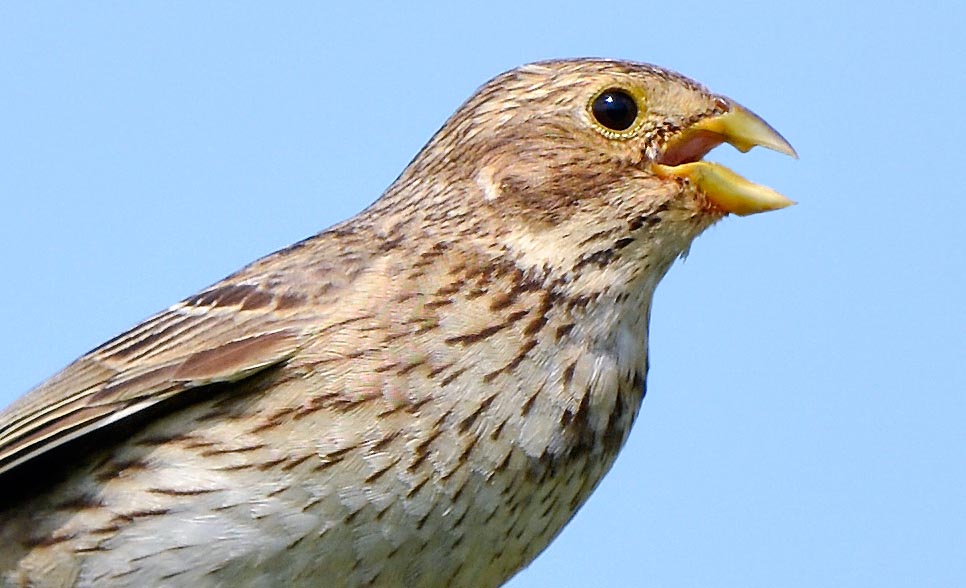 Tipically granivorous has a grinding seeds beak robust and compact, with a very marked tooth on the edge of the mandible and a very hard outgrowth on the palate © Gianfranco Colombo

In fact, if we want to verify the presence of this bird in some areas, it is sufficient to control all the shrubs or small trees present on the ground so to immediately discover one of them perched and shrieking on the highest tip. Quite a lot of its time is spent rightly in this position, monitoring that no other bird crosses it in order to avoid an immediate and furious chase to oust it.

It is very territorial and in the mean time polygamous so when it stands on top of the shrubs it must necessarily keep under control its females and its nests. 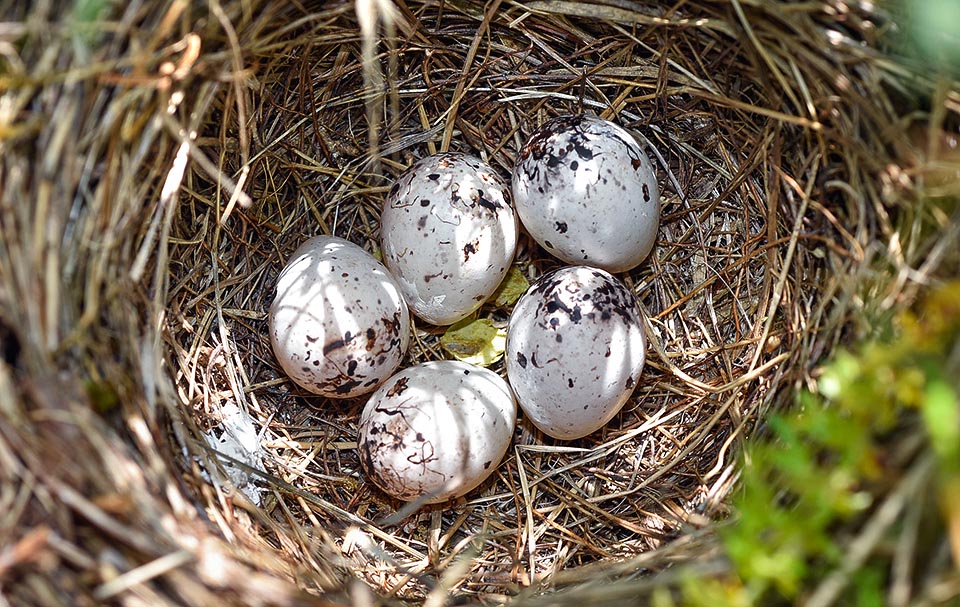 The small nest, very camouflaged, is almost always braided on the ground by the female. It contains 4-5 eggs, decidedly big if compared the size of the bird © G. Colombo

The corn bunting does not reveal in any way the particular and at times very nice liveries of its consimilar buntings. The male as well as the female, indistinguishable on the field, are of pale brown colour surrounded on the wings of an ochre defining the contour of each single feather or quill. Conversely, the chest is uniformly of cream colour strongly streaked by a brownish black dotting. It has two shades on the throat that from the bill reunite behind the nape giving the appearance of two long mustaches. Well marked and long tail, with a visible bifurcation. Fleshy coloured legs and yellowish bill. Dark and well defined eye. 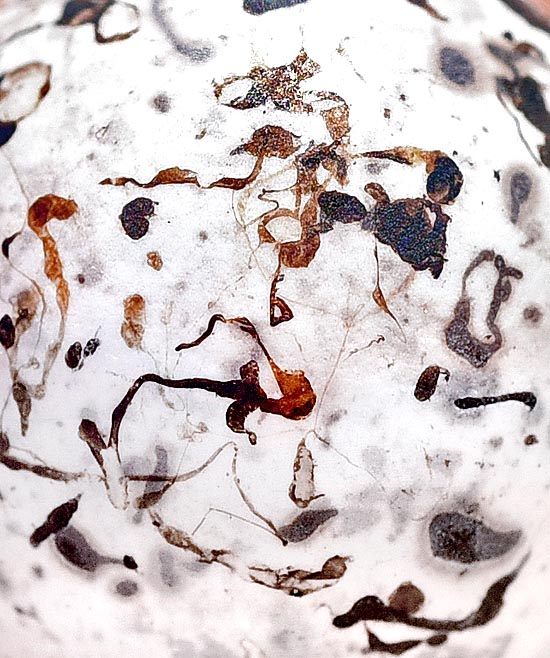 A modern painting? No, it’s the fancy drawing of an egg shell. Emberiza calandra eggs, after many judgement, are probably the most “artistic” in the birds world © Gianfranco Colombo

A livery perfectly similae to that of the well known Eurasian skylark (Alauda arvensis), the Woodlark (Lullula arborea) and the House sparrow (Passer domesticus) with whom it shares the habitat and the range but also to any other female of bounting.

Consistent difference is the dimension rather bigger and massive, well far from the elegance and the slenderness often expressed by the bountings, and also the bill, a real machine for grinding seeds, robust and compact, furnished of one very pronounced and visible tooth on the edge of the lower mandible and by a very hard outgrowth on the palate that combines besides a remarkable strength in the grip expressed by the beak also a perfect machine for crushing the hardest seeds.

These characteristics are very visible also on the field, at close range, seen that this bird, in the nuptial season, is always with the mouth open to emit its awkward song. During the flight of control on the territory or also when looking for the partner it very often holds the legs dangling maintaining a very fast flapping of the wings but without developping high speed. A characteristic flight that renders it easily distinguishable from any other bird.

Its dimensions differentiate it substantially from all other buntings.

The nest of the corn bunting is extremely difficult to discover. If the operation may reveal partially facilitated by following the parents that carry flying the food to the chicks, it is almost impossible to find a female while brooding. The nest is reached, from the landing place amidst the vegetation, with ground paths, getting to the nest from always different points. 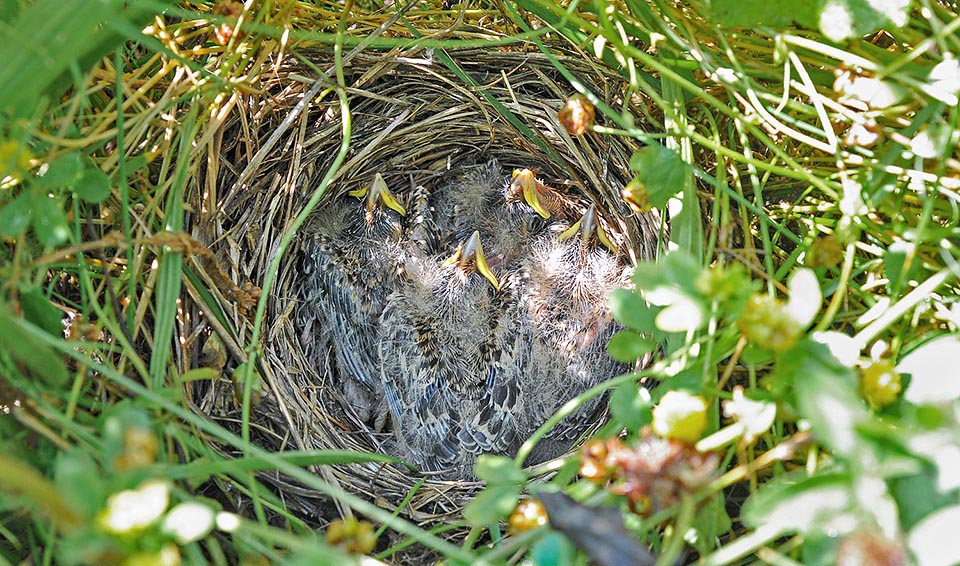 The nest is placed almost exclusively on the ground, cleverly hidden at the base of tufts of grass or of herbaceous shrubs with whose basal leaves it covers then the the recess concealing the same totally to the view from above. A slight depression in the ground is dug, then lined with well-wrapped and interlaced dried herbs that become increasingly finer inside the cup until it is sufficiently soft for laying the 4-5 eggs. At times are used also hair and bristles of animals. The male conquers the territory well before the arrival of the female after which begin the frantic stages of courting that lead to the formation of the couples. Continuous pursuits with real huddles among several specimens that roll shouting in the grass, quarrelling for the conquest of some female. 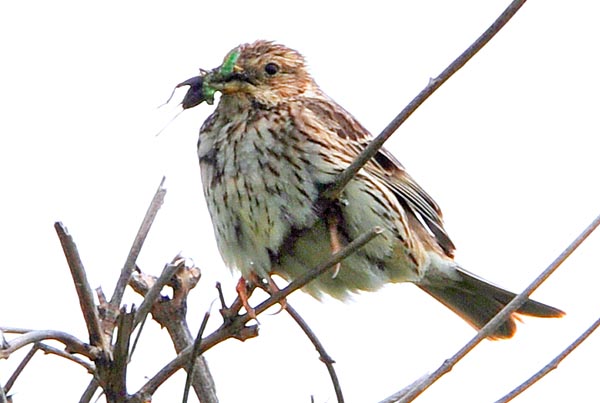 Il The nest is built by the female and only the female is in charge of the brooding that lasts about 12-15 days, remarkably short period but often recurrent for the nest birds nidifying on the ground. Occasionally the nest is parasitized by the Common cuckoo (Cuculus canorus).

During the first days of life the chicks are nourished only by the female who is soon after joined by the male. After a ten of days the nestlings move from the nest scattering around in the grass and on the low shrubs and only after about 4 weeks from hatching they take off and become autonomous. The male is often polygamous however it maintains with zeal and fairness the family commitments with all the broods.

The corn bunting is typically granivorous and eats almost always any seed passing close its beak. Only during the nidification period, the feeding becomes insectivorous hence more proteic, rightly due to the feeding necessity of the chicks. During the winter it eats also berries, small spiders, small molluscs and grass. It is not an endangered species seen the consistent populations present in various European areas, however in many areas it has drastically suffered the lost of territory conquered by the industrial monoculture.