This species is native to the Yunnan (China) mountains, between the 1500 and 2500 m of altitude and is nowadays almost extinct.

The name of the genus is the local one (Abyssinia), referred to the bigger Ensete ventricosum; the name of the species is the combination of the Greek terms “lasios” = woolly and “karpos” = fruit, with obvious reference.

The Ensete lasiocarpum (Franch.) Cheesman (1948) is a rhizomatous, caespitose, herbaceous plant, with a pseudostem formed by the foliar bases strictly wrapping each other, about 60 cm tall and with 15 cm of diameter at the base. The pseudostem ends in a tuft of elliptic leaves, about 50 cm long and 20 cm broad, of blue-green colour, with prominent central nervation in the lower page. The inflorescence is an erect, compact, terminal spike, on a short and robust peduncle, with yellow flowers united in groups of 4-6 units along the floral axis, with each group covered by a thick yellow, waxy and persistent bract; axillar inflorescences may produce at the base of the pseudostem at the same time of the terminal one. 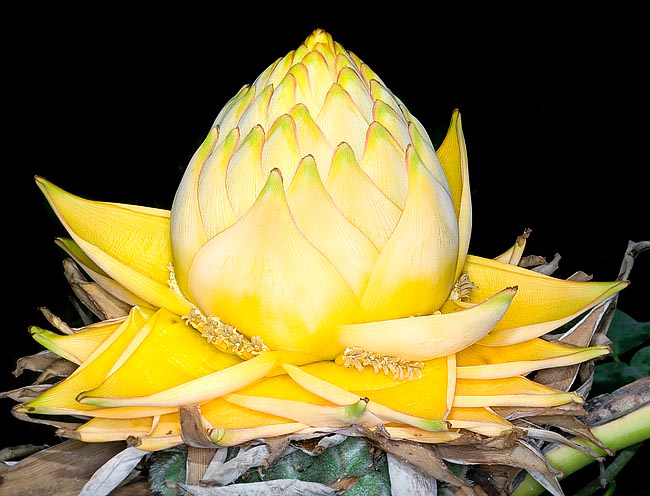 At the base of the inflorescence are present female or hermaphrodite flowers, followed by the male ones in the terminal part. The flowering goes on for 5-8 months also when all leaves have withered. The fruits are hairy, ovoid berries, not edible, about 3 cm long, yellow when ripe, containing seeds almost spherical of black or blackish brown colour.

After blooming, the pseudostem dies, but from the rhizome new suckers continue to produce. It reproduces by suckers equipped with roots, by division and by seeds, in this last case, in order to shorten the germination times, usually long, we may use the “cold stratification” closing the seeds in a plastic bag with just wet peat, sand or vermiculite to be kept in the fridge (+4/5 °C) for about 6 weeks, checking periodically possible precocious germinations; after this treatment, the germination will take place from some weeks to 2-3 months.

The classification of this species, initially inserted into the genus Musa, and later on, into the genus Ensete, is still rather under discussion, as some deem that this is to be considered as belonging to a genus separated from Musa as well as from Ensete: Musella. Rare in cultivation till the last decade of the ‘900, since then, thanks also to the increasing demand of lovers and collectors, attracted by the particular characteristics of this musacea, the availability of seeds and plants has remarkably increased. It prefers a humid warm climate during the vegetative time with an exposition in full sun or slight shade and draining soil, light and rich of organic substance. It can be cultivated also in zones rather cold thanks to the resistance of the rhizome to the low temperatures, about -10 °C with a good mulching, whilst the leaves get damages at temperatures by around the -2 °C and the pseudostem dies around the -5 °C.

During the vegetative period, it is to be abundantly watered, keeping the soil humid, and it takes advantage from fertilizations rich in nitrogen. It is cultivable also in rather capacious containers, in organic substratum with addition of coarse sand, around the 30%, in order to improve the drainage, in very luminous location, with abundant irrigations and nitrogenated fertilizations in summer, keeping the substratum just humid in winter with temperatures over the 14 °C.