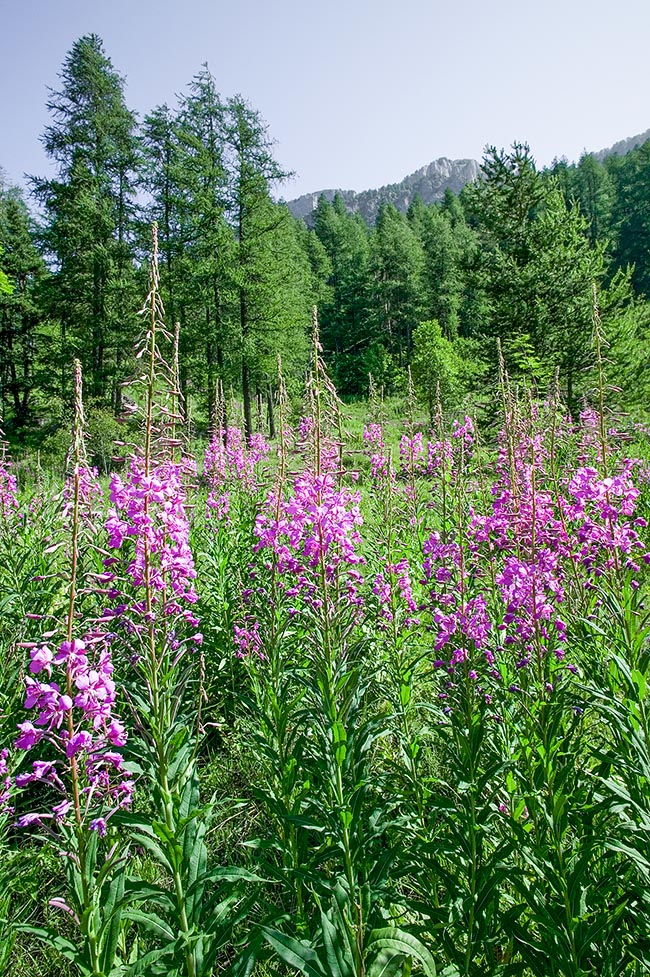 The species has a circumboreal and Eurasian diffusion, which means that it is present in the regions with cold climate of Europe, central-northern Asia, North America. It is present in alpine, subalpine and mountain environments. It grows in the natural pastures and in the pioneer vegetation, on rocky or detrital substrata.

The Epilobium angustifolium L. (1753) is an herbaceous, perennial, stoloniferous plant, with presence of creeping rhizomes; very ramified, rich of gemmae placed at ground level. It is 40 to 150 cm tall.

In the places of diffusion is abundant. Preferably it grows on siliceous substrata, humid and luminous.

The stem is erect, angular, simple or at times ramified at the top, glabrous, reddish at the base.

The leaves are sessile, spirally arranged, verticillate or opposite down and alternate on top, lanceolate, tapered at the two extremities, usually more than 10 mm broad, with entire or slightly toothed margin, with evident secondary veins.

The inflorescence, at the top of the stem, of pyramidal appearance is a raceme or a spike. It is formed by numerous flowers and is 20 to 25 cm long.

The blooming occurs between June and September. Before bloom the lower flowers and later on the higher ones. The flowers are pink to fuchsia, sometimes very clear, rarely white. They are large, bisexual, slightly zygomorphous, taht is with the upper part a little ampler than the lower one. They are horizontally arranged on the inflorescence.

The petals are 4, obovate, with entire margin, about 15 mm long, somewhat re-flexed in the bud. The style is longer than the stems. The calyx is divided in 4 lobes, of lanceolate-linear shape, with acute apex, of purplish colour. 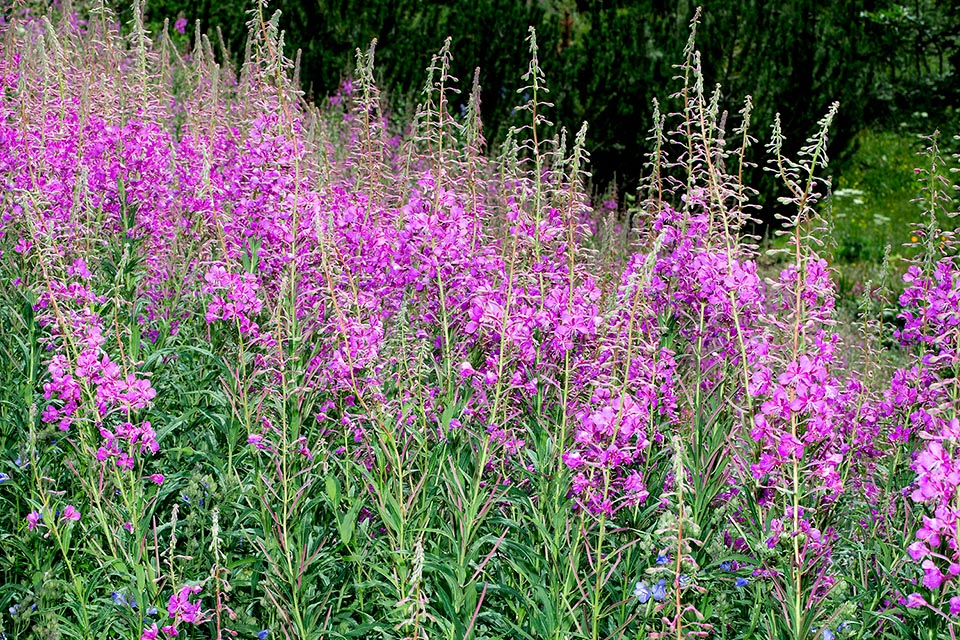 The fruit is an erect cylindrical capsule, 40-80 mm per 4 mm, purplish pink colour, with the presence of approached hairs. When it ripens it opens in 4 section curved outwards. The seeds are numerous, smooth, of brown colour and of tapered shape. The display a showy plume of white bristles at the top. They are very light and feathery and are dispersed by the wind even at remarkable distances from the place of growth.

The Epilobium angustifolium reproduces by seed or agamically through the rhizomes. Usually it loves the humid environments and the heavy soils, little draining, capable to hold the humidity. 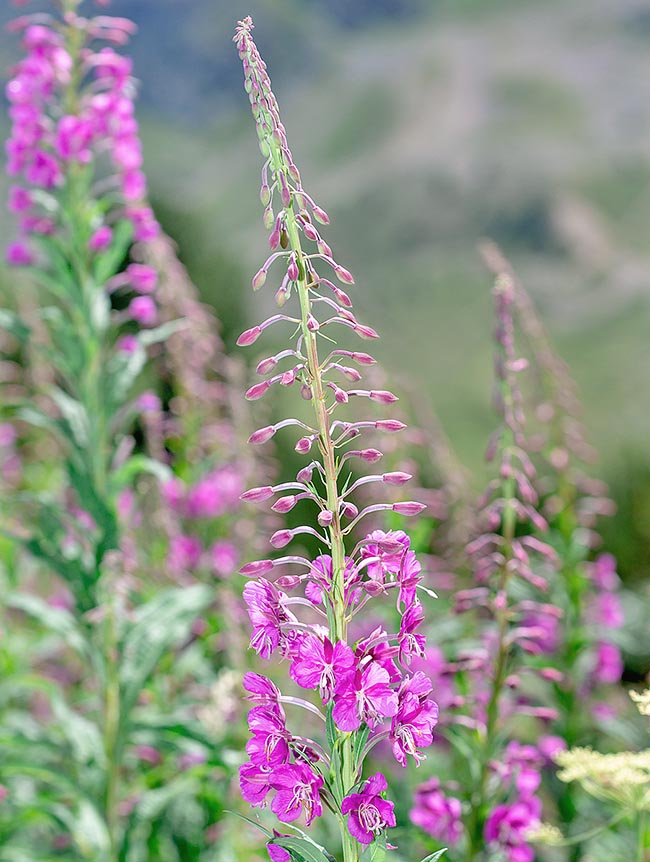 The copious flowering occurs between June and September starting from the bottom and if climate allows is easy to cultivate in the gardens. The spring shoots are edible. Roots, leaves and flowers have medicinal virtues © G. Mazza

It is present in ruderal environments, in the borders of the fields and of the roads, it colonizes with other pioneer plants deforested or burned areas.

In this regards in the USA and in England the rosebay willowherb is called “Fireweed”, that is “Herb of the fire”also because of its fire resistance. It is part of the nitrophilous vegetation present close to refuges, stables, places of rest or of stationing of the cattle and of the wildlife.

It is a melliferous plant, gathered by the bees. Despite being very diffused, its herbal properties are poorly known.

It is an officinal plant, with applications concerning the digestive system, the urinary tract and the prostate. The roots, the leaves and the flowers contain various active principles (flavonoids, tannins, mucilages…) with astringent and anti-inflammatory properties.

The roots are collected in spring or in autumn, when the plant is dormant. The are cleaned from the earth and are cut in pieces that are left in the sun or in a dryer. They are preserved in small paper or canvas bags.

The flowers are collected fresh, in July or August, at the base, without the petiole. The are left to dry up in the shade, spread on a sheet of paper, not forgetting to turn them often. They are kept in glass jars.

In the popular medicine it is employed for external use as generic astringent, for alleviating the irritations of the mucous membranes of the mouth and of the throat, the inflammations of the haemorrhoids and the light burns. Moreover, it is utilized to alleviate the intestinal irritations, such as enteritis, colitis and diarrhoeas (internal use). The beneficial effects of the fireweed in the treatment of the prostate and urinary tract disorders appear to be confirmed by recent scientific studies.

The use of this plant, as for other officinal plants, has no contraindications if prescribed by competent personnel. 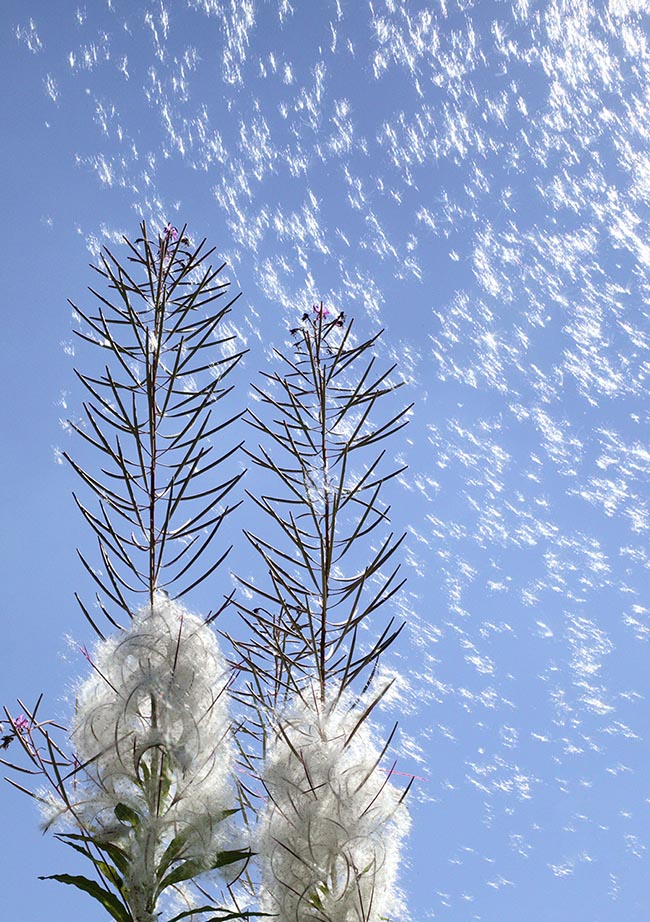 The seeds, very light and feathery, are carried by the wind even at considerable distances from the mother plant © Giuseppe Mazza

The fireweed is utilized also in kitchen. In spring are collected the young shoots, about 20 cm tall, with the tender leaflets grown close to each other on the small stem. They are consumed boiled and seasoned with oil and vinegar, possibly with the addition of a finally chopped onion and a hard-boiled egg, or sautéed in the pan with butter and with the addition of a sprinkling of grated cheese or of a sunny-side-up egg.

The dried flowers, the leaves and the shoots were utilized as tea or as tisane. In this regard they say that the Swiss botanist Henry Correvon used often the fireweed in the preparation of drinks in lieu of the tea, as, after his previous observations and his knowledges, the flowers of this plant, during the desiccation, enrich of a particular fragrance and of sugary substances soluble in warm water.

The bristles present at the top of the seeds were utilized in the production of wicks.

It is a plant easy to cultivate, in pot as well as in the ground, to utilize on the edge of artificial ponds or in the rocky gardens. It prefers luminous expositions, sunny for many hours a day and soil fertile, fresh and moist. If cultivated in pot, it needs frequent watering and a contribution of slow release organic fertilizer by the beginning and the end of season.

The plant can reproduce autonomously by seed like in nature, but it may be also multiplied by division of the tufts. The seedlings born from seed may display characteristics slightly different from the mother plant, due to the genetic variability, whilst the seedlings obtained by multiplication produce individuals identical to the mother plant.

The division of the rhizomes is done in spring, before the vegetative restart. The cuttings are to be placed in pots with loam mixed of peat and sand, maintained humid till the appearance of the new shoots and their transplant in bigger pots or in open land.

→ To appreciate the biodiversity within ONAGRACEAE family please click here.