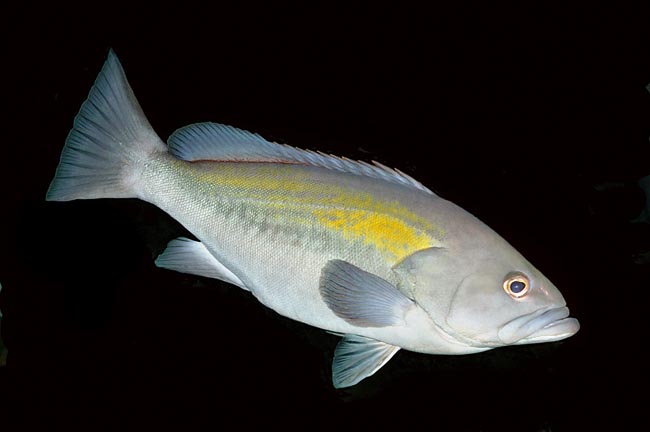 The Golden grouper (Epinephelus costae Steindachner, 1878), belongs to the class of Actinopterygii, the ray-finned fishes, to the order of Perciformes and to the family of Serranidae.

The name of the genus comes from the Greek “epinefes” = cloudy, with probable reference to the mimetic and often changing patterns which characterize these fishes.

The name of the species, “costae” = of Costa, is a tribute to the memory of Oronzo Gabriele Costa (1787-1867) who, describing in 1844 a striped specimen in juvenile livery, erroneously called this fish Plectropoma fasciatus in his opus Fauna del Regno di Napoli (Naples Kingdom Fauna). Later on, they realized that, while growing, the stripes disappear, and the name is nowadays confined among the synonyms.

The golden grouper is fairly common in the eastern Mediterranean, so much that it has also the synonym of Epinephelus alexandrinus (Valenciennes, 1828), but it has never been sighted in the Red Sea and in the Black Sea. In Italy, it is found around Sicily, in the lower Adriatic Sea and in the central Tyrrhenian Sea. Beyond the Gibraltar Strait, it has reached, by coasting Africa, Mauritania and Togo. 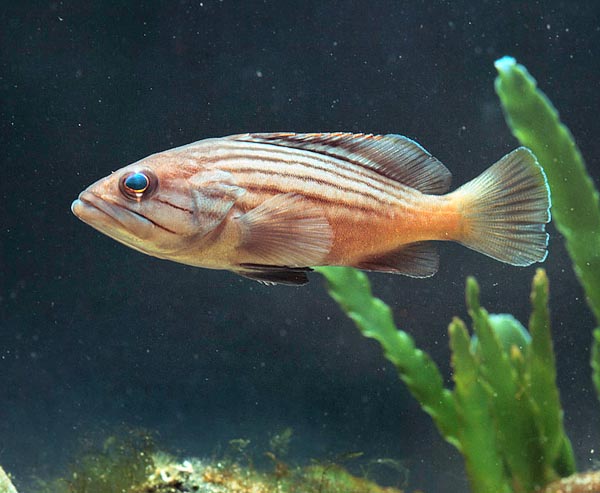 The Epinephelus costae loves the relatively warm waters and the rocky seabeds, but it can be found also in those mixed with sand.

Unlike the other groupers, usually solitary and sedentary, it moves in small schools between the 20 and the 80 m of depth. It swims calmly, for the whole day, at a certain distance from the bottom, looking for cephalopods, crustaceans, and fishes. Some say that it can go down up to 200 m while following some preys.

The body, relatively tapered and compressed on the sides, may reach the 8 kg per a length of 80 cm, but there are reports of record specimens of 140 cm, obviously much heavier.

The head, with a triangular profile, has the lower jaw longer. The preoperculum is serrated at the bottom and operculum shows three robust spines bent towards the tail.

In the young individuals, the livery is of chocolate colour, with darker lines on the sides and two typical stripes, well marked, on the operculum. 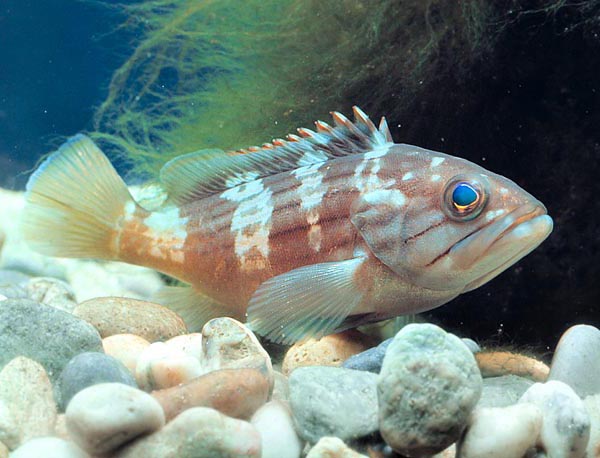 In a few instants, depending on the mood, the may camouflage with spots and pale vertical bands, present, in a lesser degree, also in the adults.

Typical of the species is the yellow dot close to the operculum of the adults, extending on the sides in the males, close to a dark and irregular band which limits the lower part of the body, significantly clearer.

Recent studies, with samples taken in Algeria, have shown that the 19-35 cm long specimens nourish for about 2/3 of fishes, for almost 1/3 of crustaceans and, in small quantity, of molluscs: those between the 35 and the 50 cm, in equal parts of fishes and ascidians, whilst the menu of the old animals, with a size between the 50 and the 90 cm, is formed for a half of ascidians, ¼ of fishes and another ¼ of crustaceans, coelenterates and aquatic plants.

Little is known about the reproductive modalities of the golden grouper, apart the fact that it is a protogynous hermaphroditic species, that is, with females that while ageing, transform in males, and that the sexual maturity is reached when 30-35 cm long. The vulnerability index of this species is of 66 over 100.