With the generic name of mountain zebra we usually refer to two subspecies of wild African equids known under the scientific name of Equus zebra Linnaeus, 1758. Many, however, consider as the true Mountain zebra only the subspecies known as Equus zebra zebra, the smallest among the zebras, whilst the second subspecies (Equus zebra hartmannae), also typical of mountainous areas or at least with presence of mountain ranges, is called, rightly, Hartmann’s zebra, in order to distinguish it from the previous one. Both subspecies, belonging to the Equidae family, were, once, diffused on the hills and the mountain ranges placed along the Atlantic coast of South Africa, from Angola, passing through Namibia, up to the zone of the Cape, but it seems that the Hartmann’s zebra did even reach the Transvaal.

So far, Equus zebra zebra is present in the Mountain zebra national park of South Africa, between the Bankberg Mountains, in the Eastern Cape, almost at the extremity of the Greet Karoo desert and in some mountainous enclaves of the Southern Cape.

The Hartmann’s zebra is present in the mountain ranges that border the Namib Desert, whilst the Angolan populations might have heavily suffered the years of guerrilla that have plagued the country. Though confined in relatively narrow zones, these species of zebra are “migratory” and tend to have distinct pastures in the dry season and in the rainy one. The Hartmann’s zebra, in particular, is known for moving even for more than 100 km.

Common characteristics features to the two subspecies that distinguish them rather clearly from the much more widespread plains’ zebra or Burchell’s zebra (Equus burchielli), are a striation free of the typical “shadows”, namely those striae of a paler or brown colour which may be seen interposed to the black striae in the Burchell’s, a grid arrangement of the thin black stripes present on the rump and the legs wholly streaked, down to the hoof. Furthermore, the mountain zebra has a ruff, even if not too much pronounced under the “chin”, which is absent in the Burchell’s zebra and bigger ears. The belly is white in both subspecies.

The proper mountain zebra (Equus zebra zebra) is the smallest species, with average weights for the males of 250-280 kg, whilst the Hartmann’s weighs 300 kg and the more than 7 years old stallions may reach the 340 kg. The height at the withers is, in the Hartmann’s, of 150 cm in the males, whilst Equus zebra zebra reaches, at the most, the 140 cm. The females are smaller and less heavy.

The term of mountain zebras is not, really, so much precise and absolute, as, on one hand also the “plain” zebra may be found, in some periods or in certain conditions, on the reliefs, whilst the mountain zebra may also be found in the plain. 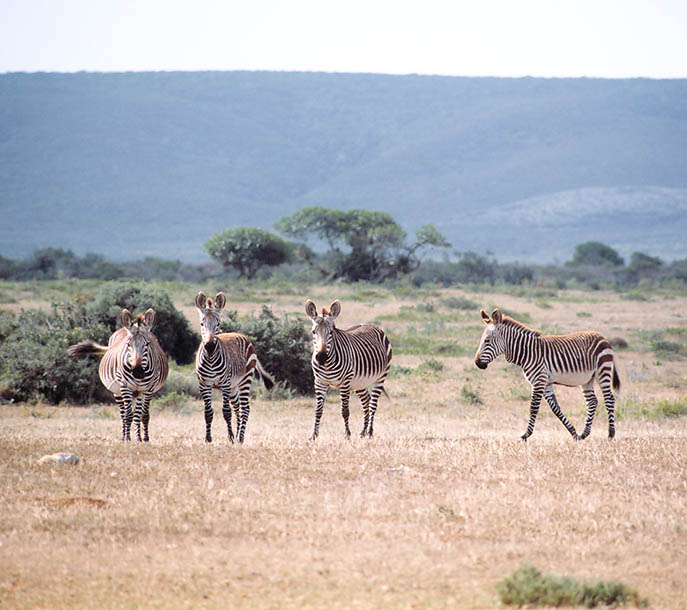 Being an animal very well adapted to sub-desert and barren locations, to rocky and at times step to zones, it tends to move in plain in the rains season and at times adventures in the desert, and in fact I remember having seen some Hartmann’s zebras on the Namib dunes.

The “excursions” in the desert are more frequent after a rainfall, but we must keep in mind that the Namib Desert, by some called “the living desert”, is characterized by a phenomenon carrying humidity, thing which does not happen in other deserts.

The warm air coming from the inside clashes with the cool air carried by the Benguela Current, a current coming up from the Antarctic seas and reaching the western coasts of Africa, and from such “clash” originate thick fogs, which, among other things, have been responsible of the thousands and thousands of shipwrecks whose remnants scattered along the Skeleton Coast and the Namib.

In the desert I was able, in this way, to witness the arrival of a wall of fog coming from the Ocean and which hid the dunes in a so thick haze that we might think to be along the Po River in a November day. This humidity allows the growth of plants and the animal life is greatly facilitated. During the dry season, Equus zebra needs to drink more frequently, even twice a day, and if the puddles are dry, it is capable to locate the ground water in the dry river bed of the streams and to dig real wells until it emerges to the surface. These water supplies are defended by other zebras but are often exploited by other animals (oryxes, lions, leopards, springboks).

The typical social organization includes a male and its harem, possibly with the newborns, and small herds of “bachelors”, usually younger males. However, not always these groups are formed by only males of only young, and at times they are joined by young females of old stallions whose strength is declining. Such organization is similar to that of the Burchell’s zebra, but the harems are a little less crowded (from two to seven or eight individuals).

Unlike the plain zebras, Equus zebra is reluctant to groups of more “herds” and the clans tend to remain rather dispersed, furthermore, it is a more silent animal and quite rarely it emits the typical i-haaaa or qua-haaa which keeps the contacts among the Burchell’s or Grévy’s zebras.

At times, especially the stallions, emit a sort of a bark (utilized, in any case, also by the other species), and this especially for expressing alarm. A shrill scream or a bleating is at times emitted by a foal refused by the mother or by a female in oestrum. When they graze, these species tend to stay more distant each other than what other species do, but I believe that this may can be attributed simply to much more arid to which they are accustomed, however such habitude remains also when the food abounds (after copious rainfalls) or in the zoos. The stallions tend more seldom to fight among them but guard the harem and lead it to the watering, watching the surroundings, looking for indications of potential predators.

The mountain zebra is usually diurnal and tends to have three periods of activity dedicated to the pasture: the first from dawn to 8 or 9 in the morning, the second by late morning (from 10 to 13) and the last from 15 or 16 to the nightfall. The winters, up on the mountains, may be cold and correspond, unluckily, to the dry season, and so the animals must acquire more calories for facing the cold, in presence of more scarce food, and this inevitably prolongs the time dedicated to the pasture and the exposure to possible dangers.

The reproductive cycle seems to be more irregular than in the other species, maybe due to the unfriendly habitat, but courting and reproduction do not much differ from those of the other zebras, except for a minor mutual aggressiveness amongst the stallions.