The magic flower of eucalyptus foams in the breeze. Hundreds of species: big or small trees. Also famous for their flowers. 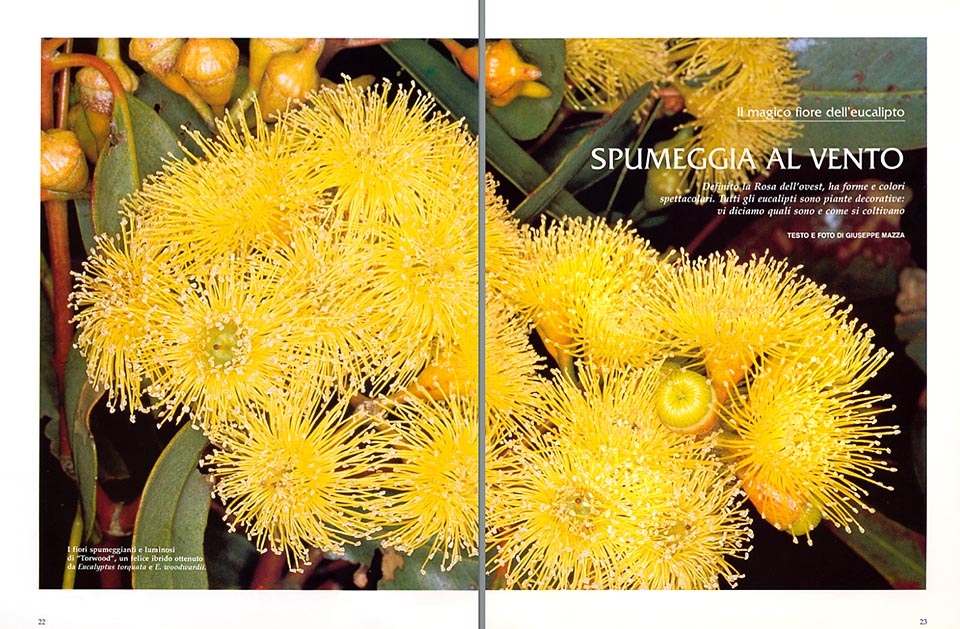 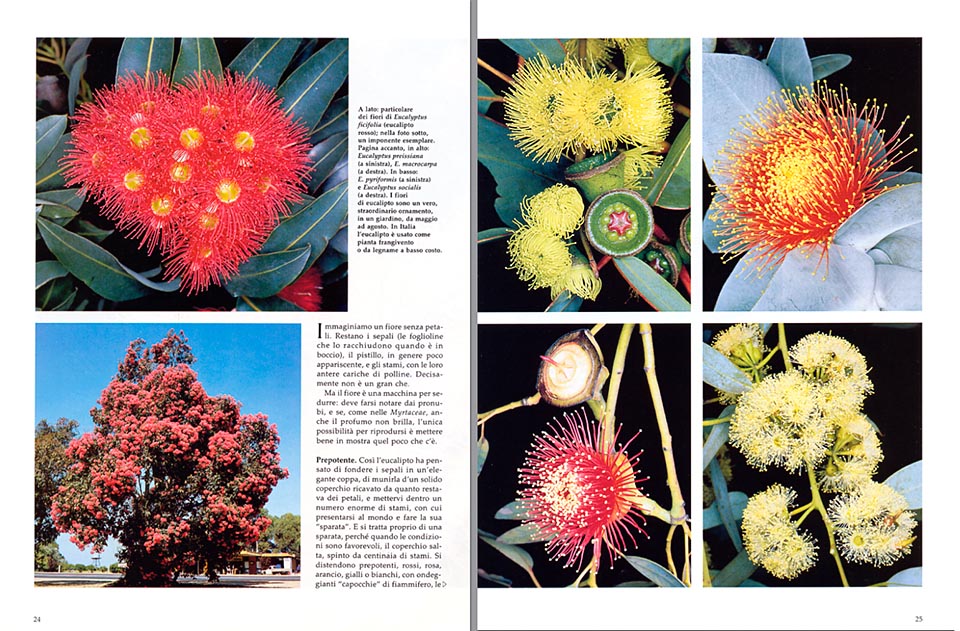 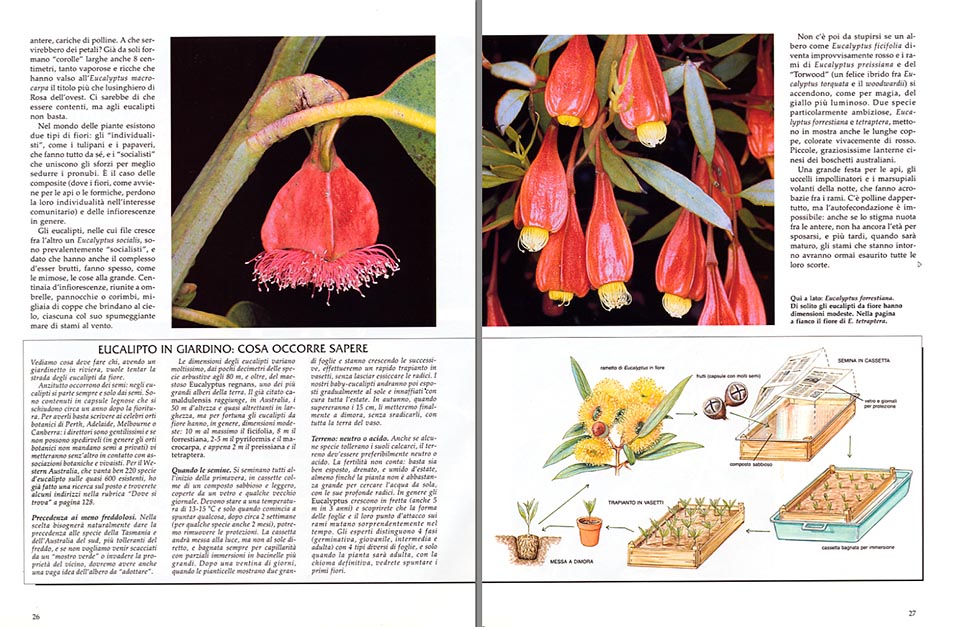 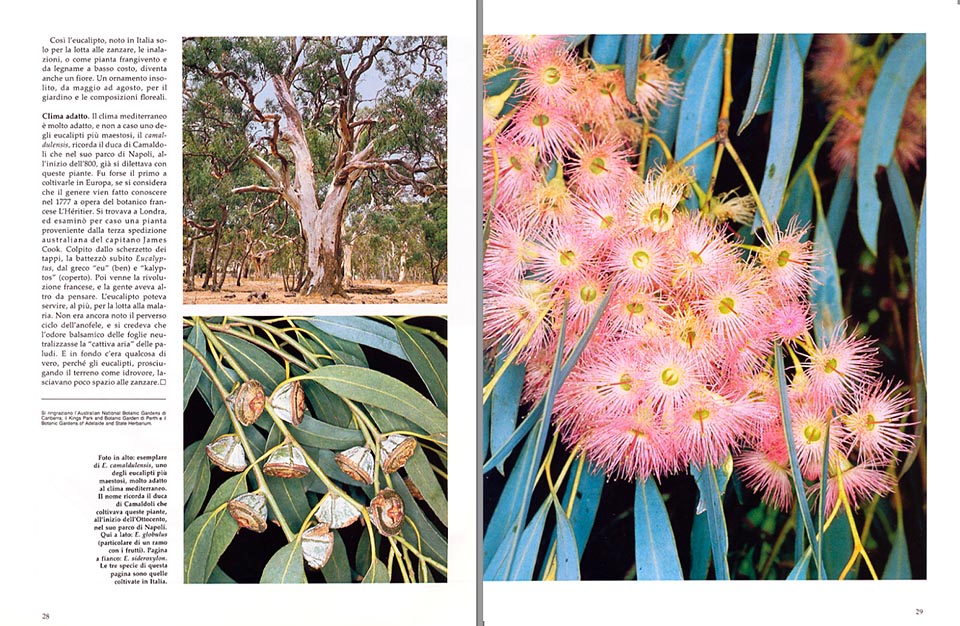 Let’s imagine a flower without petals.

The sepals, the small leaves which contain it when in bud, the pistil, usually not too much conspicuous, and the stamens, with their anthers with pollens, are left there.

Definitely, it’s not too much!

But the flower is a seduction machine: it must be remarked by the pollinators, and if, as is the case of the Myrtaceae, even the scent is not evident, the only “chance” for reproducing is to exhibit well the little which is there.

So, the eucalyptus has thought to blend the sepals in a fashionable cup, to furnish it of a solid cover obtained from what remained of the petals, and put inside an enormous quantity of stamens, with which to appear to the world and do its “boasting”.

And it is really a boasting, because when conditions are favourable, the cover comes off, pushed by hundreds of stamens. They spread, overbearing, red, pink, orange, yellow or white, with waving “match heads”, the anthers, loaded of pollen. What would be the utility of petals? Indeed, by themselves, they form “corollas”, wide even 8 cm, so much fluffy and rich, that have been worth to the Mottlecah (Eucalyptus macrocarpa), the most flattering nickname of “Rose of the west”.

There would be sufficient reasons for them to rest on their laurels, but the eucalypti are not satisfied. In the world of plants, there are two kinds of flowers: the “individualists”, such as the tulips and the poppies, which do all by themselves, and the “socialists”, which unite the efforts for better seducing the pollinators. This is the case of the asteraceae (where the flowers, as it happens for the bees or the ants, lose their individuality in the community interest), and the inflorescences in general.

The eucalypti in the ranks of which grows, among others, an Eucalyptus socialis, are mainly “socialist”, and seen that they have also the complex of being ugly, they do often, like the mimosas, the things on a large scale.

Hundreds of inflorescences, united in umbrellas, panicles or corymbs, thousands of cups toasting to the sky, each one with its foamy sea of stamens to the wind.

It is not astonishing, then, if a tree like the Eucalyptus ficifolia, becomes, suddenly, red, or if the branches of the Eucalyptus preissiana and of the “Torwood” (a successful hybrid between the Eucalyptus torquata and the Eucalyptus woodwardii), light up, as by magic, of the brightest yellow.

A great feast for bees, pollinating birds and night flying marsupials, which perform acrobatics between the branches.

There is pollen everywhere, but self-fertilization is impossible: even if the stigma swims between the anthers, it’s not old enough for getting married, and, later on, when it will reach the ripe age, the stamens which are around will have by then exhausted their supplies.

So, the eucalyptus, known in Italy only for its struggle against mosquitoes, the inhalations, or as windbreak plant, or for its cheap timber, becomes also a flower.

An unusual ornament, from May to August, for the garden and for floral compositions. The Mediterranean climate is very suitable, and it is not by chance that one of the most majestic eucalypti, the Eucalyptus camaldulensis, recalls the Duke of Camaldoli, who, in his park near Naples, at the beginning of 1800, was already enjoying himself with these plants.

He was, maybe, the first to cultivate them in Europe, if we consider that the gender was born only in 1777 by means of the French botanist L’Héritier.

He was in London, and, by chance, examined a plant coming from the third Australian expedition of Captain James Cook. Stricken by the trick of the corks, he christened the plant immediately as Eucalyptus, from the Greek “eu” (well), and “kalyptos” (covered).

Then the French revolution came, and people had other things to worry about. The eucalyptus could be useful, at the most, for the struggle against malaria. The wicked cycle of the anopheles was not yet known, and it was thought that the balsamic scent of the leaves could neutralize the “bad air” of the marshes. And, after all, there was something true, as the eucalyptus, drying up the ground like water-scooping machines, were leaving not much room to the mosquitoes.

Nowadays, with the increasing economical welfare, in Italy there are many small “dukes of Camaldoli”, and so, let us see what must be done by he who, having a small garden in the Riviera, wishes to try the way of the flower eucalypti.

First of all, seeds are necessary: for the eucalypti you have to begin only and always from the seeds. They are contained in woody capsules, which open, ripening, about one year after flowering.

For getting them, it is sufficient to write to the famous botanical orchards of Perth, Adelaide, Melbourne, or Canberra: the directors are very kind, and, if they cannot send them to you (usually, botanical orchards do not send seeds to private persons), they will put you in touch with botanical associations and nurserymen.

In the choice, we have, of course, to give the priority to the species of Tasmania and of South Australia, which bear the cold better, and if we don’t want to be crushed by a green monster, or to invade our neighbour’s property, we shall have to hold also at least a vague idea of the tree we want to “adopt”.

The dimensions of eucalypti vary very much, from the few centimetres of the shrubby species, to the 80 metres, and more, of the majestic Eucalyptus regnans, one of the biggest trees in our planet.

They are sewn by the beginning of spring, in small cases full of a sandy and light compound, covered by a glass, and some old newspaper. They must be kept at a temperature of 13-15 °C, and only when something begins to come out, after about 2-3 weeks (for some species, even 2 months), we shall be able to remove the protections.

The case will then be placed in the light, but not directly under the sun, and watered always by capillarity, with partial immersions in larger basins.

After about twenty days, when the small plants show two large leaves and the following ones are growing, we shall effect a quick transplant in small pots, without leaving the roots to dry up.

Our baby-eucalypti will be then gradually exposed to the sun and watered carefully for the whole summer. In autumn, when they will overcome the 15 cm, we shall finally put them in place, without uprooting them, with all the earth of the pot.

Even if some species tolerate calcareous soils, the ground must be preferably neutral or acid. The fertility is not important: it is sufficient that it’s well exposed, drained, and wet in summer, at least till when the plant is not big enough to look for water by itself, with its deep toots.

Normally the Eucalyptus grow up quickly (even 5 metres in three years), and you will discover that the shape of their leaves and their point of junction on the branches, change surprisingly with the time. The experts distinguish four phases (germinative, juvenile, intermediate, and adult), with four different types of leaves, and only when the plant will be adult, with its final foliage, you will see the first flowers coming out.

Eucalyptus: the eucalypti are also splendid flower plants was last modified: May 22nd, 2019 by Giuseppe Mazza