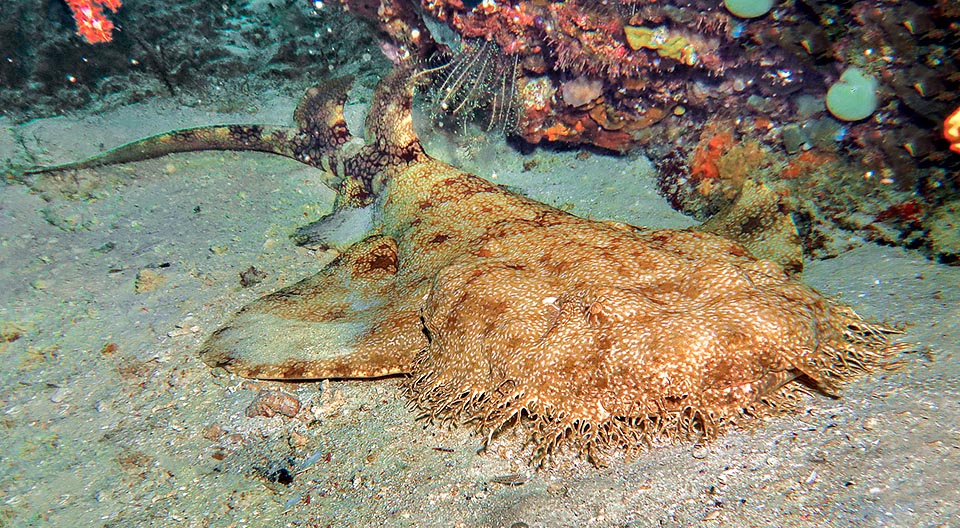 The Tasselled wobbegong shark (Eucrossohrinus dasypogon) has an unusual flat look; at first sight we would say more similar to a sole than a shark. Usually little more than one metres long, even it has been reported the maximum length of 3,66 m, is seemingly harmless but is gritty and biting if disturbed © Sebastiano Guido

The name of the Eucrossorhinus genus comes from the Greek words “eu” (good, nice), “krossoi” (tassel) and “rhinos” (nose), to indicate the beautiful “flakes” located over the nostrils. That of the species dasypogon, always coming from the Greek, takes the words “dasys” (hairy) and “pògòn” (beard) to comment the fringe contouring the lower jaw.

Wobbegong in an indigenous Australian language meaning wiry and thick beard, whilst tasselled is the English term with which this shark is indicated. Actually, the term tassel means nape or flake.

It is present mainly in the north of Australia, in New Guinea and sporadically in some island of the Indonesian east. 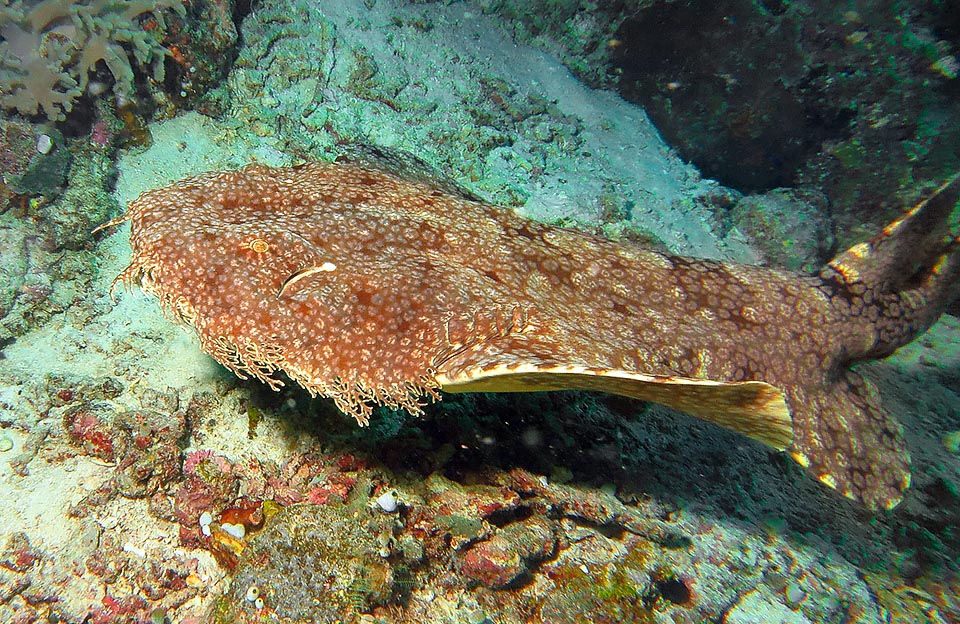 Present in north Australia, New Guinea and some islands of Indonesia, spends its day on the bottom sheltered by madrepores or in small grottoes having a sandy bottom © Sebastiano Guido

The Eucrossorhinus dasypogon lives in close contact with the bottom, from just a little under the surface up to about 40 m, where, during the day, it can be found laid on some wide madrepore of the genus Acropora, but mainly in small grottoes with sandy bottom from which partially protrudes the head. During the night, it begins hunting its customary preys: invertebrates, squirrelfishes and spurred hatchet fishes living in the same habitats where it is used to rest during the day.

The maximum reported length is of 366 cm, even if this information is of a doubtful origin and cannot be considered as valid, also in light of the medium size of the specimens we meet, that do not exceed the 125 cm.

The main characteristics, when met under water, are the flat body where stands out the enormous oval head surrounded at the margins by a rich fringe of jagged appendages that want to hide the contour and hide its jaws. Immediately behind the head, like wings with the rounded tips, open the ample pectorals: two big fans that emphasize the “carpetlike” look of the fish. 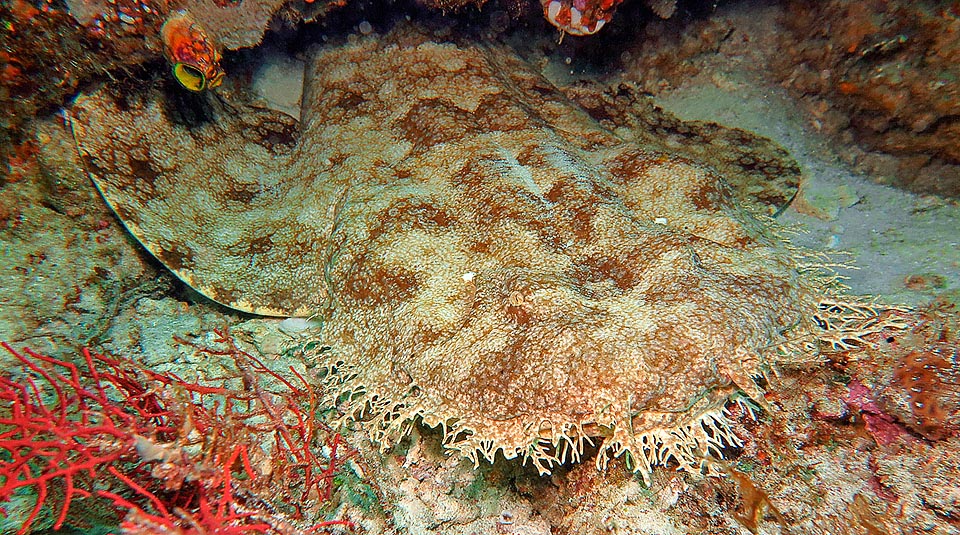 It goes unobserved due to the perfect hazelnut with spots camouflaging, to break the contours, and the incredible fringe surrounding the jaw © Sebastiano Guido

The epidermis, of hazelnut colour, is mottled with robust darker spots, more numerous in the rear part, and the while (background plus dark spots) is dotted with white freckles that enhance its mimicry.

The eye is small, of hazelnut colour, with little visible diagonal iris, followed behind by a more evident white spot, placed at the end of the spiracle maybe for deceiving an aggressor. The mouth is very ample with three rows of toothy teeth in the upper jaw and two in the lower. Two nasal barbells, ramified like a flake, cover the nostrils.

Even though it may look docile and harmless it has a nervous character and, if touched or provoked, reacts with a very powerful bite with which seizes with the teeth the disturber. 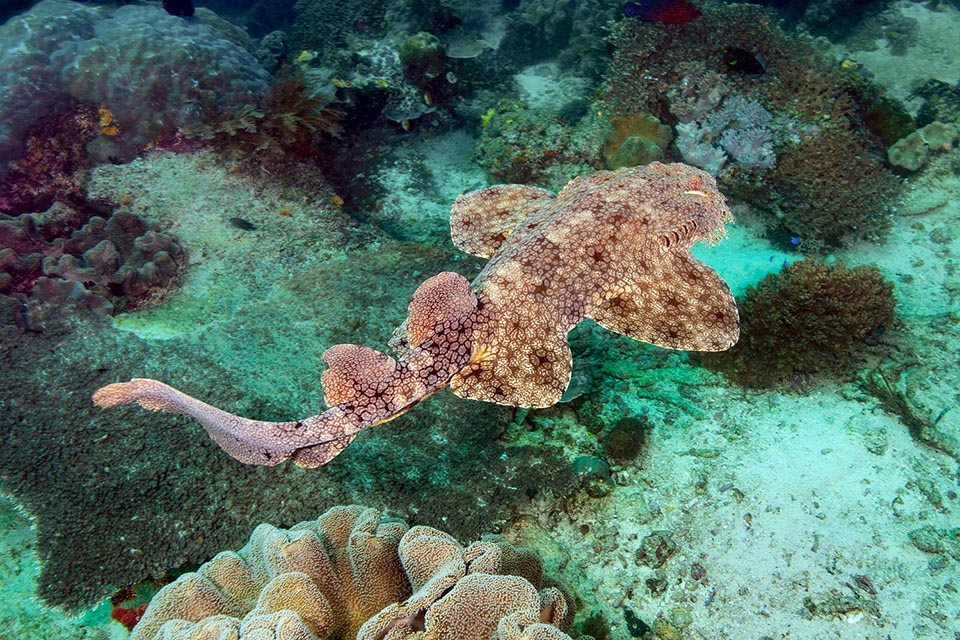 A rare spectacular swimming picture. This fish is ovoviviparous, and the embryos get nourishment initially from the yolk then, once this is ended, from the intrauterine fluid © Jim Greenfield

The grip is so tenacious that more than once has allowed to extract it from the water together with the victim and also in this instance it has not been easy to induce it to loosen the jaws. Under water the only system for having it ending the bite is the expedient of pressing its gills in order to stop its breathing and consequently obliging it to open the mouth. The ample oral opening, suddenly wide open while hunting during the night, causes a vast depression that aspires in its mouth a huge flow of water, with all what is swimming inside the same. The sharp arcade of teeth completes the work, leaving no escape to the victims.

The fish is ovoviviparous and the embryos get nourishment initially from the yolk then, once this is ended, from the intrauterine fluid. When born, the babies are about 20 cm long and usually their number does not exceed the twenty. The population is in sharp decrease due to the environmental degradation and the fishing. The resilience of the species is very low and the doubling time of the population goes from the 4 years and a half to 14. The fishing vulnerability index is very high, reaching the quota of 90 (2022) on a scale of 100.