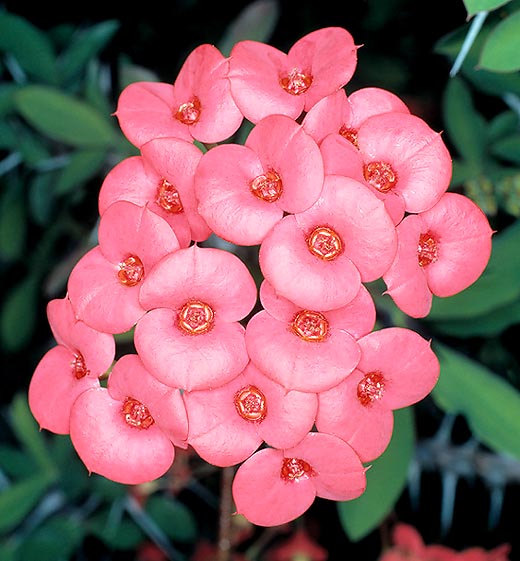 The Euphorbia milii latex is irritant and carcinogenic, but antileukaemic © Giuseppe Mazza

The plant is native to central-southern Madagascar where it grows in areas characterized by the presence of granite rocks.

The genus gets the name from Euphorbus, personal physician of the king of Numidia, Juba II (52 B.C.-23 A.C.), who honoured to him these plants in an opus describing their medicinal properties.

The species is dedicated to the French explorer Pierre Bernard Milius (1773-1829) who introduced it in France in 1821.

The Euphorbia milii Des Moul. (1826) is a much ramified semi-deciduous shrub, up to about 1,5 m tall, with thin stems, 0,5-1 cm thick, convoluted and semi-succulent, tending to become woody with the age, of brown grey colour, with 3-5 ribs and several 0,5-2 cm long grey thorns; all the parts of the plant contain an irritating latex.

The leaves, grouped at the apexes of the branches, are alternate, obovate or oblanceolate, 2-5 cm long and 0,8-1,8 cm broad, of an intense green colour, with stipules at the base of the leaves, reduced to 1-1,5 cm long thorns.

The cyathia, the typical inflorescences of the Euphorbiaceae, united in sub-terminal cymes on a 4-7 cm long peduncle, are formed by two reniform bracts with rounded apex of bright red colour, about 0,6 x 1,2 cm, a campanulate involucre with five nectariferous glands, 1 x 2 mm, of reddish yellow colour, with, at the centre, a female flower without calyx and corolla, surrounded by male flowers also without calyx and corolla.

The bracts have the function of attracting the attention of the pollinator, like the petals of a single flower. The fruits are ovoid trilobed capsules, 3,5 x 4 mm, containing ovoid seeds, 2,5 mm long and 2 mm broad, of brown grey colour, which, when ripe, are ejected. 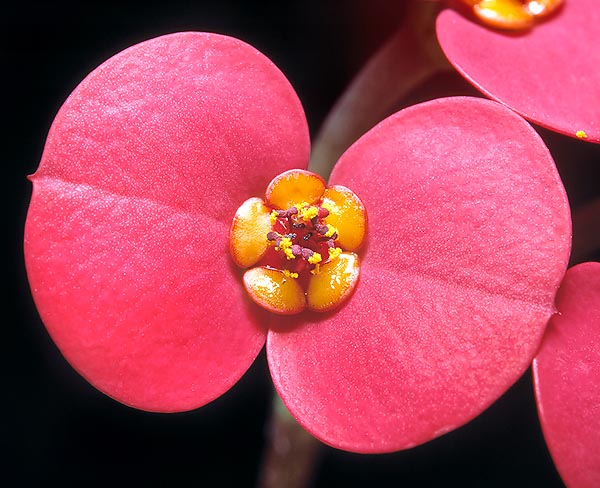 It reproduces by seed and easily by cutting in spring early summer, you cut an apical portion of 8-10 cm, you dip it in lukewarm water in order to stop the spill of the latex and you dry it well for some days before placing it to root in sandy soil or agri-perlite, kept slightly wet, in a very luminous position. The rooting occurs in 6-8 weeks; being rather sensitive to the transplants, these are to be carefully done.

Very popular pot plant, along with the countless varieties and hybrids, thanks to the facility of cultivation and the practically continuous flowering all over the year, it may be utilized as garden plant in the tropical, subtropical and, marginally, in the warm temperate climate zones.

Even if it tolerates, in fact, for short time and dry, temperatures of some degrees below zero, when in presence of high humidity and low temperatures, as can be the case in the temperate climates with rainy winters, it is easily subject to rottenness.

Ideal complement of desert gardens, it may be employed also for forming edges and isolated spots on draining soils and in full sun, or, at most, in warmer climates, slight shade; it is resistant to the wind and the sea aerosols, and therefore it may be profitably used close to the sea. Several varieties have been selected with bracts with the most various colours, white, yellow, orange, pink and red in various shades and dimensions, very much appreciated are the dwarf and with compact vegetation varieties, suitable to the cultivation in pot as well as to create low edges and soil covers.

When in pot, it is to be cultivated in soils with addition, for at least 1/3, of coarse sand, or agri-perlite, for improving the drainage, in full sun or at the maximum possible luminosity and with temperatures never below the 12 °C. 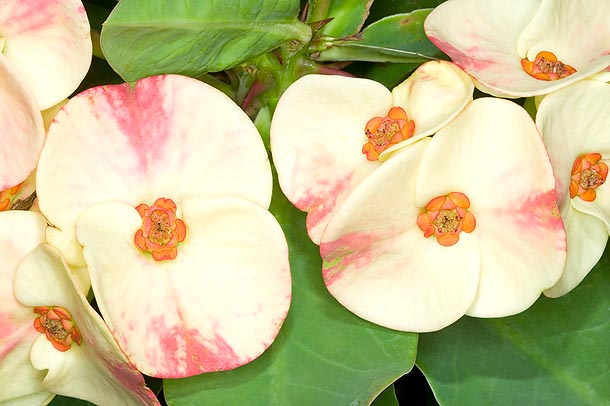 It is to be regularly watered in summer, but allowing the soil to dry up before irrigating again, it can also bear long dry periods, but in such case it may loose all the leaves.

In winter, the watering are to be suspended, depending on the temperature of the location where they are kept; the excessive water in winter is, in fact, the main cause of failure in its cultivation.

We remind that the latex contains irritating and carcinogenic substances; the contact with the skin may cause serious dermatitis in the most sensitive subjects, whilst, with the eyes, it may cause temporary blindness, it is therefore good to use gloves in operations on the plant which may cause spill of latex. In case of contact, wash repeatedly with water and soap.

On the other hand, the latex is utilized in some applications in the traditional medicine and a substance contained in it, after laboratory studies, has shown a remarkable antileukae- mic activity.

The plant is inscribed into the appendix II of the Cites (species whose trade is ruled at international level).

Euphorbia milii was last modified: May 7th, 2018 by Giuseppe Mazza