This plant is native to South Africa (Eastern Cape Province and KwaZulu-Natal), where it grows along the coasts, the banks of the rivers and at the margins of the forests, up to 1.500 m of altitude.

The Euryops chrysanthemoides (DC.) B.Nord. (1968) is a much ramified shrub, of rounded shape, 0,5-1,5 m tall, with alternate leaves grouped at the extremity of the branches, from elliptic to obovate, pinnatisect, of glossy dark green colour, 3-8 cm long and 1-2 cm broad. The inflorescences, on a striated, 10-15 cm long, peduncle, are solitary or with compound head, that is, formed by a main axis with several ramifications ending in a flower head and are the typical inflorescence of the Asteraceae.

The flower head is formed by a host of sessile flowers spirally inserted on a roundish and convex base, the receptacle, surrounded by a bell-shaped involucre formed by 14-15 ovate bracts, glabrous or ciliate on the margins, 0,5 cm long, united at the base for about one third of their length. The flowers of the outer ring, called ray florets, have the corolla oblanceolate, 1,5-2 cm long, formed by five petals fused together of a bright yellow colour. The ray florets are female, but have mainly the function of attracting the attention of the pollinator, like the petals of a single flower. Inside the ring are the bisexual flowers, called disc flowers, with a five yellow lobes tubular corolla. 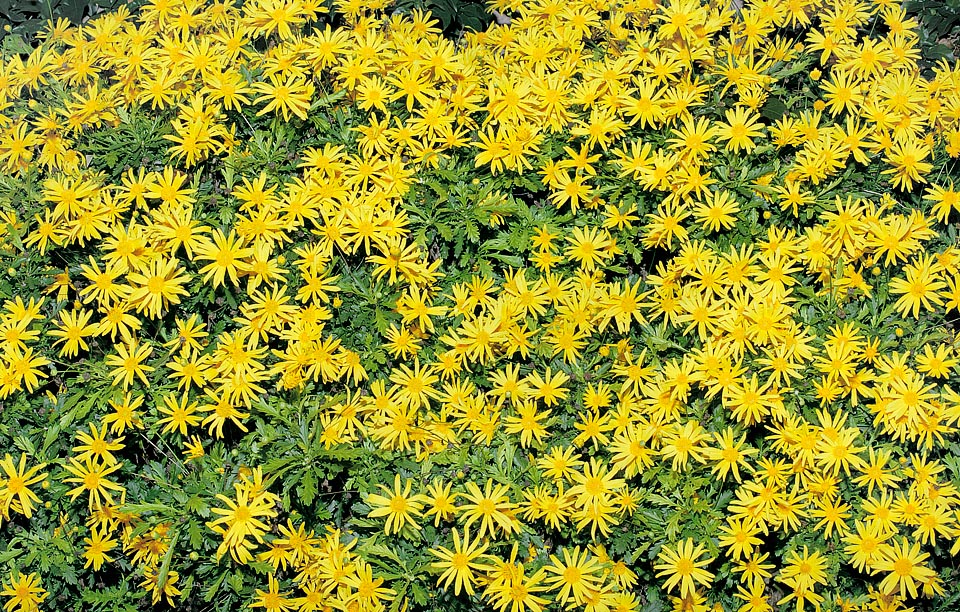 The fruits, containing one seed only and called achenes (or, more precisely, cypselae), in the Asteraceae, are fusiform, striped, of blackish colour, about 2 mm long. It easily reproduces by seed or by cutting in spring, placed to root in soil formed by the 50% of sand or agri-perlite; it self disseminates easily and therefore, where the climate allows this, is potentially a pest.

Very appreciated plant, in particular in the tropical and subtropical climates areas, for the ornamental leaves finely subdivided, which remind those of the ferns, and the abundant, almost continuous, flowering all over the year.

In order to develop in the best way, it needs of full sun and even if not being too particular about the soil, provided the same is draining, as it grows also in the poor ones, for getting luxuriant vegetation, rich soils and regular fertilizations are quite useful.

It bears the high temperatures and short drought periods, and for this reason it may be also utilized in desert gardens, but it takes advantage from regular watering during the warmest periods. It is quite resistant to the low temperatures, even to about -7 °C for short time, under this temperature, it loose the aerial part, but till about -10 °C it grows again from the base in spring; in the most rigid climates it may be cultivated as annual, seen its growth velocity. As the foliage, with the time, tends to get lost downwards, in order to get it thicker and more compact, periodical pruning are useful, whilst, for a complete renewal, it may be pruned drastically at the base by late winter.

It is utilized for borders, hedgerows against a wall, soil cover or isolated plant; for its good resistance to the saltiness it is suitable also to gardens close the seaside. It is also an appreciated pot plant and as cut flower, contrary to other Asteraceae, the flowers do not close by night or at the shade, and therefore they may be utilized in floral compositions.