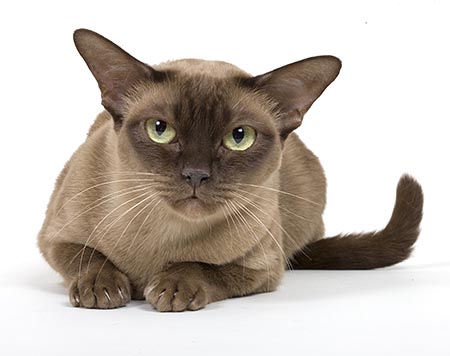 Burmese means Burman in English. In spite of this, this breed has nothing to share with the Birman which nowadays is called Sacred Cat of Burma in order to avoid such confusion. The first Burmese come from Wong Mau, a she-cat carried in USA on 1930 by Joseph Thompson, medical officer. This cat should have issued from the crossing of golden-eyed Siamese and dark coloured cats. Crossed with dark coloured Siamese, she has permitted to get cats with a unique colour, the sepia. This new breed was immediately recognized in the USA.

With the evolution of tastes, the breeders have evolved the morphology of the cats. The Siamese has become much more long-limbed, the traditional Siamese being renamed Thai. As for the Burmese, it has evolved on one side towards the Burmese called American (cat of cobby format), on the other hand towards the Burmese called British (cat of semi-foreign format). These two cats have nowadays sufficiently different morphology to be considered as different breeds.

In USA, during the seventies, some crossings between the Persian permitted to create a semi-long variety. This variety has been named Tiffany. In Great Britain, it is also called Chantilly. In 1981, the baroness Miranda von Kirchberg crossed the Burmese with other breeds in order to get other colours. In particular, the utilization of a Chinchilla Persian allowed obtaining the golden and silver shaded colours. The classical coloured cats were named Asian. The golden or silver shaded coloured cats were named Burmilla (BURMese ChinchILLA).

The Burmese is a cat with a stable and loving character (at times even nicknamed “cat-dog”), full of energy, very playful and extremely enthralling. It is very extroverted and holds a strong personality. It is defined as talkative, with a sweeter voice than the Siamese. 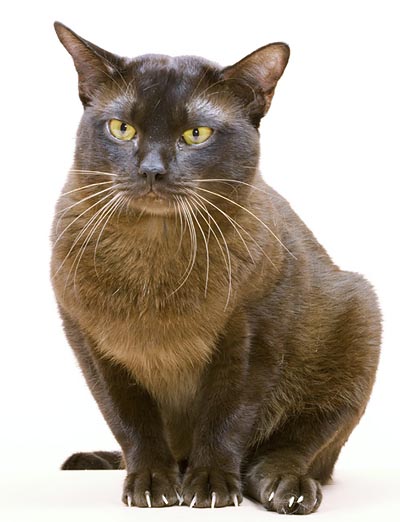 Medium sized. The front view forms a short triangle, broad at the level of the cheek-bones and ending into a spindle with a slightly rounded muzzle. The upper side of the skull is wide and slightly convex. The front is slightly rounded. The nose has a clear stop and then ends straight. The top of the nose and the chin form a straight vertical line. The lower jaw has a good thickness of chin. A slight pinch is admitted in the kittens.

Big, the eyes are well spaced. The upper line of them is bent and slightly aslant towards the nose. The lower line is rounded. The colour is particularly bright and shining. With the British Burmese, all the nuances from the yellow to the amber are accepted, being the golden yellow the preferred one. With the Asian and the Burmilla, all nuances from yellow to green are accepted; the gold is preferred with the solid and the green with the silver. With the Tiffany, the colour of the eyes is related with the pattern of the coat. The shape, the size and the disposition of the eyes are more important than the colour. The colour of the eyes is very sensitive to the variations of intensity and tonality of the light. If possible, the judgement is to be done in the daylight.

Of average size, the ears are placed well spaced on a skull slightly rounded and ideally on the extension of the triangle formed by the head. Wide at the base, their extremity is rounded. Seen from the side, they are slightly pointed forward. The ears may seem proportionally bigger in the kittens than those of the adults and smaller in the males with developed chops. The neck is muscled and of average size. Of semi-foreign format, the body has average length and size, form and muscled at the touch, and heaver than what it seems. The chest is strong and rounded in profile. The back is straight. Somewhat thin, the paws are proportioned to the body. The back ones are slightly higher than the front ones.

The feet are oval and well drawn. Fairly well thick at the base, the tail tapers up to a rounded tip. Of average length, it reaches the shoulders when placed along the body. In the Asian, the British Burmese and the Burmilla the coat is almost without undercoat, short, thin, bright like silk when touched and well distributed on the body. In the Tiffany, the semi-long coat is silky and thin with little undercoat. Bright, it is longer at the level of the collar, the rumps, under the belly and on the tail.

All between Asian, British Burmese, Burmilla and Tiffany. 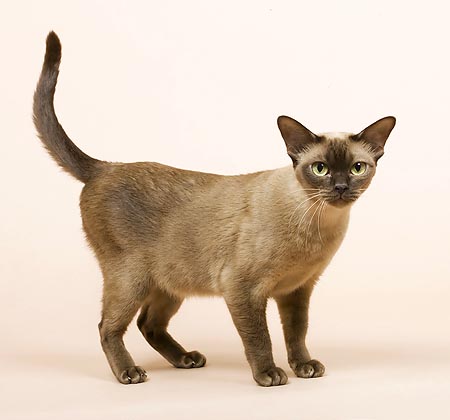 In the sepia cats, the colour of the coat gets stronger towards the extremities of the paws, the tail, the mask and the ears, which are darker. Tolerances are accepted for the colour and the pattern of the coat in the kittens and the young cats.

All colours, but white, traditional pattern.

All colours, patterns and motifs admitted for the Asian, the Burmese and the Burmilla.