After the legend, long time ago in Burma there was an old monk taking care of a temple dedicated to a golden goddess with sapphire eyes. This monk had a cat named Sinh.

One day, the temple was attacked and the monk killed. Sinh jump on the head of its master and looked at the statue of the goddess straight on her eyes. Its eyes became then sapphire and its skin golden, like the goddess, but its paws remained white, like the hair of the monk on which they were laying. After a few days, the cat died of a broken heart. It is by that time that all the cats of the temple met with the metamorphosis and became the sacred Birman cats.

Well later on, a couple of sacred cats was stolen in the temple of Lao Tseu and reached France in 1920. Those who do not believe in legends say that the sacred Birman cat was born in France in 1920 from the crossing of a white-gloved Siamese cat with a Persian.

Whatever happened, the Second World War was passing there, decimating the wandering cats and several domestic cats. After the war, there was just one only pair of sacred Birman cats alive, Orloff & Xénia de Kaaba. All present sacred Birman cats descend from them. 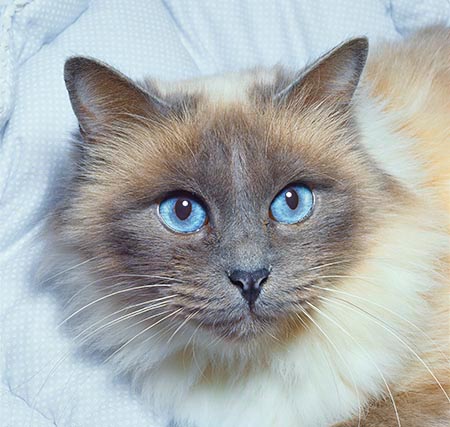 The sacred Birman cat is an affectionate cat, sweet and playful. Its semi-long hair and its colorpoint pattern give it an elegance which is enhanced by the gloves of its four paws.

To raise up cats of breed means to work on the alive and to accept the unforeseeable. Whatever breeder’s efforts, Madame the nature has the last word. For what the sacred Birman cat is concerned, the getting a white gloving and its transmission to the descendants are rather unforeseeable. The corresponding genetic criteria are not yet mastered and only the skill of the breeder (and the luck) permit to get a very beautiful gloving.

Medium, the head is wide, triangular with rounded contours. The cheeks are full. The front is slightly rounded. The profile line prolongs with a slightly concave change of direction at the level of the eyes. Without stop, the nose is Roman, that is, arcuate. Medium-sized, the muzzle is broad, without pinch. The chin is strong. Great, almost rounded, the eyes are well spaced and the blue colour is the most possible intense.

The ears are medium-sized, almost as wide as high. Spaced of the width of a ear, they have a rounded tip. The interior is well hairy. Of medium size, the neck is well muscled. The Sacred Birman has a long and powerful body, bulky, with a straight and regular back. Of medium height, the paws have a robust bony structure and a good musculature. The feet are big, rouns and solid. Of medium size, the tail is proportioned to the body.

Semi-long, the coat is very silky. Short on the face, it gradually gets longer starting from the cheeks towards a collar, very appreciated in the males. The coat is long on the back and the sides. The undercoat is not abundant and light. The hair may curl tightly on the belly. Note: seasonal changes must be kept in mind when judging the length of its coat.

The anterior paws, before and behind, have white gloves ending in a right line, ideally at the junction between the foot and the paw. Posterior paws have white anterior gloves extending to the back of the paw and ending in a point from half to the three-quarters of the heels (spurs). Regularity between the height of anterior and posterior gloves is desirable. The pads are pink and/or of a colour corresponding to the base colour of the cat.