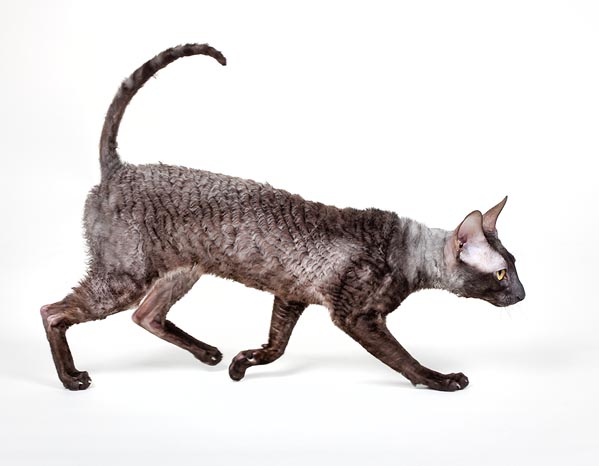 The Cornish Rex, called also Cornwall Rex, is characterized by a coat with very short hair, curly and soft.

Native to Great Britain, is comes from a spontaneous mutation appeared in 1950 in Cornwall. Its name reminds therefore its origin country and the Rex rabbit, which has analogous hair. The breed is recognized since 1967.

The middle-long hair variety is called Californian Rex. This has appeared during the sixties in California. The Californian Rex is classified as a new race and therefore cannot take part to the contests.

The particular look of the Cornish Rex fur is due to the recessive form of the gene R, responsible of the absence of the awn hairs. Its guard hairs are short and wavy.

Cornish Rex is a very sociable cat which detests the solitude. It appreciates the company of other cats and of dogs. It is lively, fidgety and much playful, affectionate and sensitive, constantly looking for caresses and attention. The Cornish Rex is much talkative and expresses in a shrill voice. It is usually much affectionate to its master, to which it keeps literally glued. It hates the cold.

Longer than wide, the head is medium-sized. Seen from the side, two curved lines may be clearly noted. The first one goes down from the top of the skull to the base of the nose. The second one goes from this one to the tip of the same. These lines form two typical convex arches called “Roman profile”. The skull is ovoid; the prominent occiput accentuates the oval of the head. The nose is wide and convex. The whisker pads are full and well defined; they form a slight pinch. The chin continues the prolongation of the oval of the head. Ovoid and well open, the eyes, of medium size, are placed obliquely and spaced of about the length of an eye. The colour of the eyes is in accordance with that of the coat. Big, placed high on the head, the ears have conical shape. Long, fine and muscled, the neck has a typical arcuate shape. 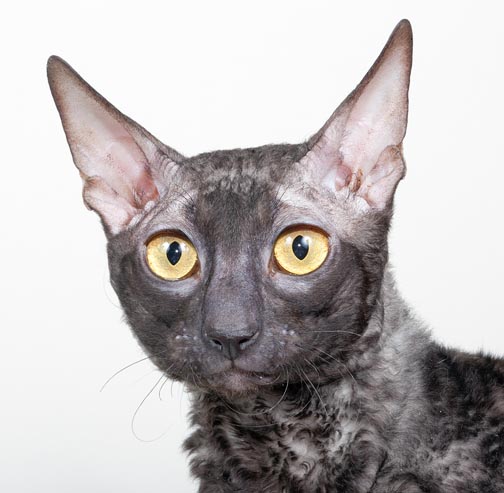 The head is longer than wide. The ears are conical © Giuseppe Mazza

Of oriental format, the body is long, with full and deep ribcage and arcuate back similar to that of a greyhound.

The rear, slightly rounded, is muscled. The structure is quite fine. High and thin, the legs are firm and muscled. The feet, oval, are small. The Cornish Rex and the Californian Rex give the impression of keeping on the tips like a dancer. Long, whip-like, the tail is covered by fine fur and, if possible, indented.

In the Cornish Rex: the fur is short, very soft at the touch, indented, forming successive waves which remind the astrakhan. The vibrissae, even if short and broken, must be present.
In the Californian Rex: the fur is middle-long, very soft at the touch, indented with wave-shaped locks. The vibrissae are long and soft. The fur of the Cornish Rex and of the Californian Rex is formed by guard hair, of downy structure, and by undercoat. There is no awn hair between the guard hair and the undercoat. The fur is shorter and thicker on the legs and the head. The Cornish Rex and the Californian Rex associate the elegance with an athlete’s musculature in their look.