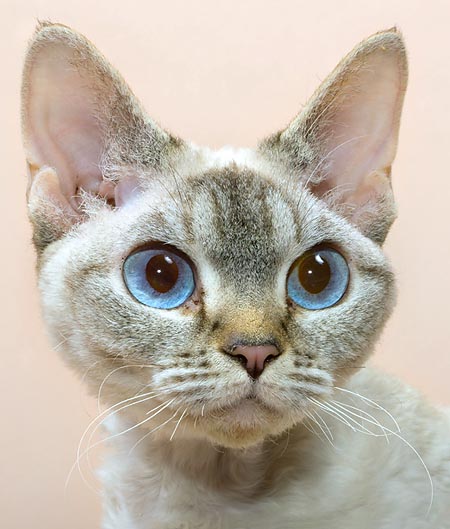 The Devon Rex, cat with a curled fur and a unique expression, has appeared in a spontaneous way in Devonshire.

It’s there, that Mrs. Cox picked up, during the sixties, a curled kitten, which she named Kirlee, and which is at the origin of the breed.

Rather small if compared to the body, the head, seen from the front, evidences three convex arcs formed by the lobe of the ears, the prominent cheek-bones and the muzzle.

Seen from the side, the flat skull is prolonged by a convex front head followed by a net stop at the level of the nose. This break is placed between the eyes.

A very particular attention is applied to the good occlusion of the jaws.

Big and well open, the eyes are oval. All colours are accepted, in accordance with the mantle.

Remarkably big and very low placed, the ears are very wide at the base in such a way that the lobe of the ears marks a stall. Rounded at their extremity, with or without “lynx tips” (tufts), they are covered by a fine fur. The temples are often bare.

Thin and muscled, the neckline detaches well the head from the shoulders. Of semi-cobby format, the body is nice, firm and muscled. The chest is wide and well open. Long and high, the paws have a rather thin bone frame if compared to the body with, in any case, a powerful musculature. The feet are oval and small. 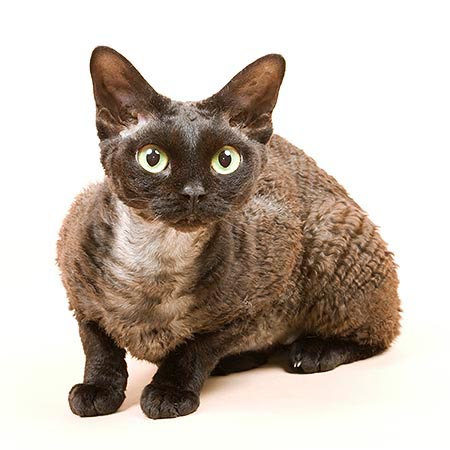 Long and thin, the tail is covered by a short and curled fur.

Thin and soft, the fur is short with a thick and disorderly curling.

The thickness of the fur varies depending on the different parts of the body, the upper regions (face, ears, back, sides, upper part of the paws and the tail) are more furnished than the inferior ones (throat, chest, abdomen and inner part of the paws).

The fur covering the skull and the neck is often so short that it cannot be serrated.

Fully bare areas are considered a simple fault in the kitten, but a serious one in the adult.

The whiskers, rather rare, are short and curled.