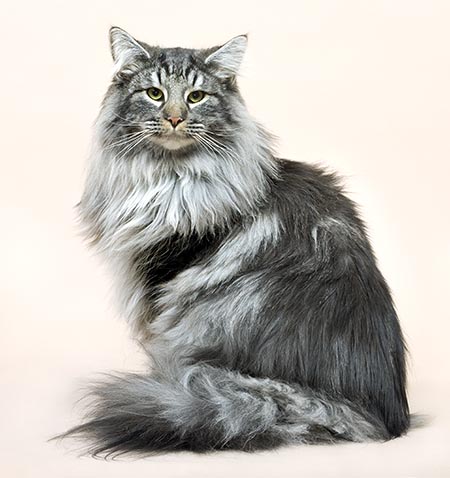 After having left the banks of the Nile, the domestic cat has spread all over Europe. It has even gone very far away to the North, reaching Norway where it has met a particularly unfriendly habitat to which it had to adapt. It is in this way that it developed naturally a thick fur for fighting the coldness.

During the eighth century, Vikings broke over Europe, reaching the most remote places of the Mediterranean. Some authors think that they might have carried with them some specimens of long hair cats from the Caspian or the Black Seas. In this way, the Turkish Angora would have something to do with the history of the Norwegian cat. It is maybe from there that originates the legend of the big white cats drawing the cart of Freyia, the goddess of fertility and love. It is possible that these two origins have joined in forming during the centuries a cat particularly suitable for the coldness of the North.

The Norwegian cat has been described around the 1550 by Peter Clausson Friis. Since 1930 some breeders have taken an interest in preserving the originality of this cat and in getting its recognition. The breed has been recognized in 1972. The Norwegian is also known under the name of Skogkatt.

The Norwegian is a cat well high on his paws and this avoids a contact of its abdomen with the snow and the consequent cold. Its back paws are longer than the fore ones, a specific conformation for running and jumping… Male, when adult, it can reach the 6-7 kg of weight, the female is smaller with a weight of 4 kg. Semi-long hair cat, it is equipped with a woolly down-hair and of a water-repellent outer coat, an originality which cannot be found in any other breed. An abundant collarette encircles the head and gives the cat a very particular look.

It has qualities as climber and jumper and is excellent in climbing on the trees, from where it comes down with the head down, a specificity of the breed. It has also great qualities as hunter. Its size allows this cat to attack preys of big size, such as hares, turkeys and geese. It has a particularly pleasant temper, very “glue pot”, very calm, of a great temperamental stability. Calm, but always present, it much enjoys the company of the different members of the family, kids, other cats and dogs.

Of medium size, the head forms an equilateral triangle. The upper head and the front, slightly rounded, are followed by a straight nose, without curve or stop. The muzzle has no pinch; the chin is firm. Big, almond-shaped, the eyes are placed rather obliquely and give the cat an attentive and lively expression. All colours of eyes are authorized, whatever the coat colour is.

Medium to big, the ears are well open at the base, slightly pointed on the top and placed on the extension of the triangle. Seen from the profile, they are pointing forward. The lynx tips are desirable but not compulsory. The internal fur of the ears extends up to their external edge. Well muscled, the neckline is of medium size. 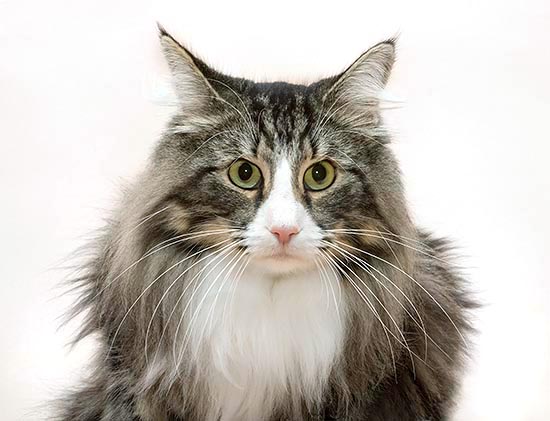 The body is rather long, powerful and strong, with a robust bone frame and a full and broad chest. Rather high, the paws are much muscled and have solid bones. Big and round, the feet have tufts of hairs between the toes.

Long, thick at the base and well furnished, the tail is ideally as long as the body. The coat is double. Long water-repellent and glossy outer coat hairs cover a woolly down-hair, giving an impression of heaviness and of depth.

The collarette is formed by long hairs starting from the back of the ears and of a frill very furnished. The collarette and the rumps are bulky and formed only by down-hair.

The quality of the fur is much more important than the colour.

All colours, excepted those based on chocolate, lilac, cinnamon and fawn.