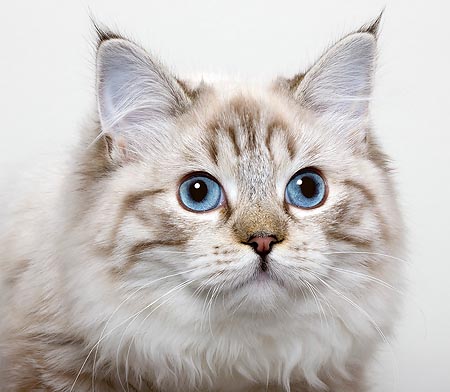 The Ragdoll is a very balanced, peaceful and affectionate cat © Giuseppe Mazza

The Ragdoll is a breed of cats native to United States. This breed has been created in 1963 by Jane Baker, in California. This cat has the particularity of relaxing completely when carried, like a ragdoll.

The breed has been recognized in 1963.

When carried, the Ragdoll becomes as loose as a ragdoll.

This trait of character is inherited from its first infancy: when the mother carries the kittens, it is normally for changing of location, for getting them closer to a source of food or for taking them in a place deemed to be good for serving for their learning process. This type of shifting may be dangerous; this is why nature has endowed the kittens of the instinct of relaxing while their mother is carrying them.

This instinct diminishes with the age, but does not disappear completely. So, a simple manner for controlling a cat is to hold/carry it by the skin of the neck.

In the Ragdoll, this relaxation, when carried, remains total, like during its first days of life.

Shaped as an equilateral triangle, the head has a rounded outline. Seen from the front, the space between the ears seems to be flat. In profile, the skull and the front are rounded and prolonged y a slight cavity at the level of the nose, which is straight (profile defined as “toboggan”). Of medium length, the muzzle is well developed and rounded; the chin is strong. Quite big and oval, the eyes are slightly slanted even if they are not oriental. The colour is of the most possible intense blue. Of medium size and placed on the extension of the triangle of the head, the ears are broad at the base. The tip is rounded. Seen from the side, they are slightly turned forward. The neckline is short, strong and muscled.

Long and powerful, the body is rectangular with a broad and round chest. The width between the shoulders is equal to that between the hips. In spite of being heavy, the Ragdoll is not fat; only a belly pocket is accepted. Of medium size, proportionally with the rectangle formed by the body, the paws have a strong bone structure and a powerful musculature. Round and strong, the feet do have an interdigital pilosity. Long, the tail ideally reaches the base of the scapulae. Broad at the base, is well dense and ending in a tuft.

Semi-long and silky, the fur is formed by an important cover of guard hairs and of little down-hair. A ruff starting from the back of the ears and prolonging on the neck is appreciated. The fur is short and dense on the fore paws, longer on the back ones, where it can even form knickerbockers. 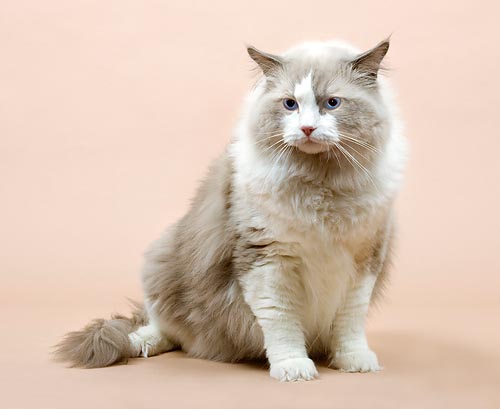 The Ragdoll can be carried like a ragdoll © Giuseppe Mazza

Points: the ears, the mask, the paws – but feet – and the tail do have the base colour of the cat, darker than the body and homogenous if possible. A white blaze on the nose and/or between the eyes, interrupted or not, is accepted provided it does not reach the truffle. The chin must be white. Fore feet: white gloves, regular and firm. Back paws: wholly white up to the middle of the thighs. The white colour must cover the hocks. There must not be coloured patches in the white. Body: its colour goes from the egg-shell to the milky-white depending on the base colour of the cat. The chin must be white and extend in a white band, of variable width, to the ruff, the chest, pass between the fore paws and under the belly up to the beginning of the tail.

Points: the ears, the mask and the tail have the colour base of the cat, darker than the body and homogenous if possible. The mask has a white inverted V which must be also symmetric and must not extend beyond the external edges of the eyes. The truffle is pink. Body: its colour goes from the egg-shell to the milky-white depending on the base colour of the cat. The chest, the belly, the paws and the feet are white. Some white patches are accepted on the back and the sides.

Points: their colour is limited to ears, the upper part of the mask and the tail. The truffle is pink. Body: white, but some small egg-shell to milky-white patches, provided they do not represent more than the 20% of the surface of the body, head and tail included.