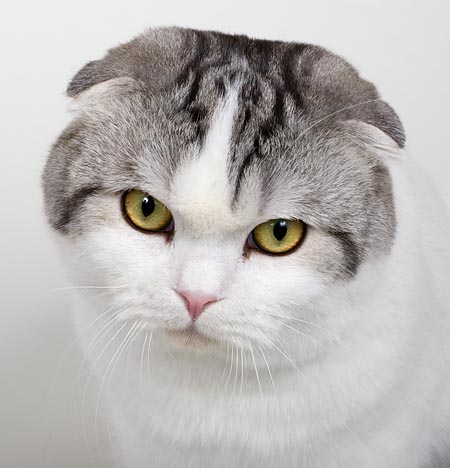 The Scottish Fold is characterized by its fold ears. The variety with erect ears is called Scottish Straight.

The spontaneous mutation responsible for the folded ears has appeared in 1961 between some Scottish farm cats. It was discovered by William and Mary Ross, who bred this genetic particularity and gave birth to the breed of the Scottish Folds. During the crossings, some semi-long subjects did appear. This variety was named Scottish Fold Longhair, Highland Fold or Coupari. The breed was recognized in 1971.

The fold of the ears is caused by a dominant specific gene FD, whose action is probably connected with the presence of polygenes. The action of the FD gene is little known. Probably, it consists in modifications of the bony structure at the cartilage level. And this evidences at the level of the ears with a cartilage structure not sufficient for keeping the ears erect. The action of the gene FD is more or less pronounced and gets in more or less folded ears. So, we can distinguish:

– the double fold, more appreciated in the contests, has the ears completely flattened on the head.

In the homozygous cats (FDFD), the action of the gene causes disabling bony deformations. Due to this, the union of two Folds among them is forbidden by the standards. So, the genotype of the Scottish Fold is FDfd and that of the Scottish Straight is fdfd.

Having been the Scottish Fold fixed essentially with the British, it shares the character.

The head is broad with well rounded outline whatever the point of observation is. The cheeks are full; the skull is rounded, descending by a slightly concave bend. The nose is short and broad. A slight stop is admitted. The adult males have powerful jowls. 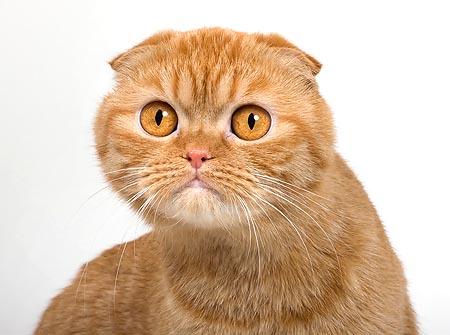 The folded ears are typical of the Scottish Fold © Giuseppe Mazza

Seen both from the front and from the profile, the muzzle inscribes in a well defined circle, with whisker pads firm and full. The nose and its edge are straight. The tip of the nose is placed on the alignment of the chin, which is well firm.

Round, big and well open, the eyes are well distanced each other, and this accentuates even more the width of the nose. The colour must be uniform and in accordance with the colour of the mantle. The most intense and bright tonalities are preferred.

Wide at the base, the ears are from medium to small, rounded at their tip and placed well spaced, in such a way to respect the rounded contour of the head.

In the Folds, the ears are folded forward, and can have a simple or double fold. Small ears and well folded are preferred to bigger ones with loose folds. In the Straights: the ears are rect.

Stocky and muscled, the neckline is very short, so much to appear not existent. Of semi-cobby format, the body is broad, thick, muscled and well rounded. The bone structure is robust and the musculature powerful. The size is from medium to big. The hindquarters must be very soft when touched. Medium sized, the paws are slightly smaller than the length of the body. The bone frame is robust and the musculature is strong. A particular attention will be placed on their mobility, which must be similar to that of the other breeds. The feet are round and firm.

Thick at the base, the tail is medium to long. It gets slightly thinner up to a rounded tip. Flexible, soft, it must not be rigid. In the Highlands, it must be well covered and in panache.

In the Scottish, the fur is short, thick, firm and erect to the point to open on the neckline when the cat turns its head. It can be compared to the hair of a wool carpet. The fur has a thick down-hair and gives the impression of a good natural protection. In the Highlands, the fur is semi-long, silky, with a thick down-hair. The collaret and the back are well furnished. 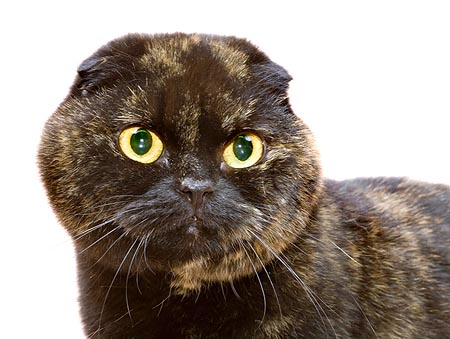 Folds crossings are forbidden due to their invalidating character © G. Mazza

Unions between Folds are strictly forbidden.

The Scottish Fold and the Scottish Straight (respectively Highland Fold and Highland Straight) compete in the same class.