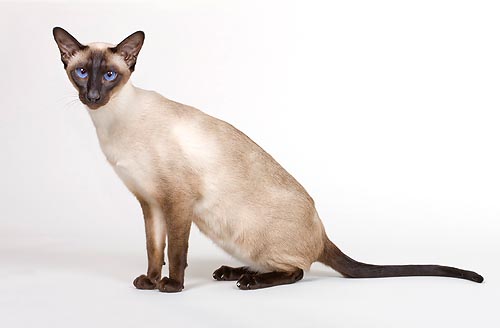 It is said that the history of the domesticated cat finds its origins in the old Egypt and that it reached Asia and settled there after having followed the Silk Road.

So, when the French and the British conquered the Asiatic south-east, the cat was already established there since long time. In Siam, it was the sacred animal of the royal family.

The korat was much appreciated at the royal court of Siam. In 1884, the king Rama V gave, as present, a Siamese to the United Kingdom general consul, Edward Blencowe Gould, pretending that this cat was the symbol of Siam, so as to maintain in his kingdom the exclusivity of the precious korat.

These cats were named Siamese and were exposed at the Crystal Palace in 1885.

The trend had started and during the successive years, several cats were taken from Siam and became the cradle of the Siamese in Great Britain.

In France, Auguste Pavie began the movement by carrying himself some Siamese cats in 1885. In 1890 the Siamese found its way to the United States. Since then, Siam has become Thailand, but the Siamese keeps for us the memories of that time. 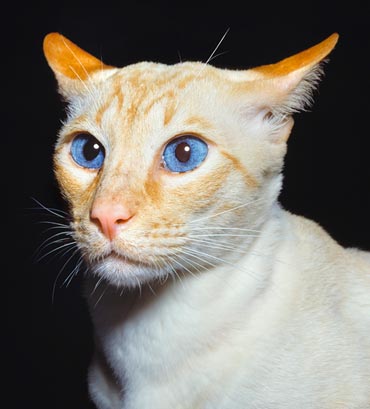 The first standard of the breed was published in 1892 by the GCCF and the first clubs were created in 1901.

At its origin, the true Siamese cat has a rounded head, the body is robust and its muscle structure is athletic. Its hair is short and clear with dark extremities (head, paws and tail).

It’s this difference of colours between the body and the extremities that fascinated the first collectors and characterized the breed so much to give the name of Siamese to the gene responsible for this colouration.

Many discovered it at the movies, thanks to the animated cartoon by Walt Disney, The Lady and the Tramp (1955), adapted from an opus by Ward Greene, Happy Dan, the Whistling Dog (1937).

In the fifties, the Siamese becomes very common. Its constitution gets finer along with the evolution of the taste of the breeders, and several colours come to life.

The Siamese will then generate a whole family of cats with coloured extremities: the Orientals.

Apart its beauty, what fascinates more in the Siamese (and its successive varieties), is this exclusive character which renders it the privileged feline companion. They say that the one who has never lived with a Siamese does not really know the feline soul. 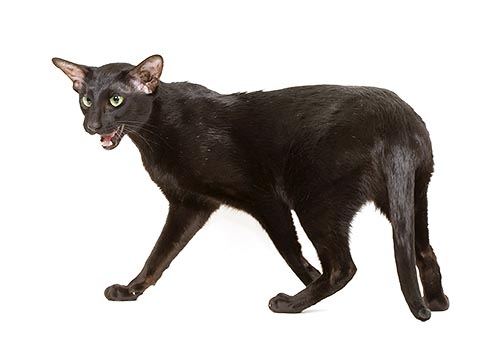 The Siamese, the Oriental, the Balinese and the Mandarin are long-limbed cats, elegant, slender and well muscled. Combining harmoniously a nice bone frame with a soft and firm muscle structure, they are athletic cats with fluid lines.

These cats must be perfectly balanced; the whole harmony must not be altered by the presence of an extremely isolated morphologic characteristic.

They are lively and talkative, being provided of a strong personality.

Seen from the front, the head, of average size, is long and triangular. The skull and the front are flat or slightly curved.

Three types of profile are accepted: perfectly straight, slightly convex, or with two planes with the frontal one prolonging that of the nose without any interruption.

The cheeks are flat. Jowls are accepted for adult males. Seen from the front, the nose joins the triangle of the head. The tip of the nose must not be narrow.

From the side, the nose is long and straight. The jaws are average. The chin is firm, in line with the tip of the nose.

Of medium size, the eyes are orientally shaped. Almond-shaped and well spaced, they are inclined towards the nose in harmony with the triangle of the head. The colour of the eyes is of the most possible intense blue colour in the Siamese and the Balinese, and the most intense green for the Oriental and the Mandarin. The uneven eyes (green and bleu) are accepted in the part-colors. The uneven eyes and the blue eyes are accepted in the white Orientals. 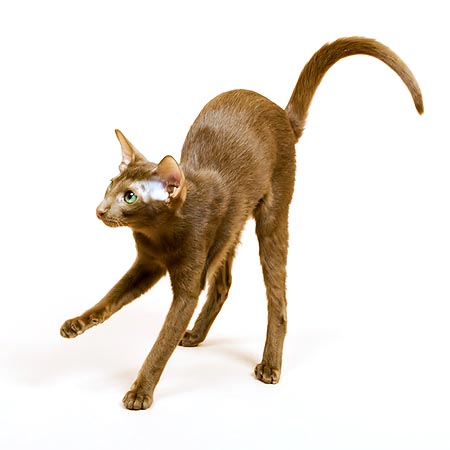 Big, broad at the base, well spaced, the ears prolong the triangle of the head.

Long, thin and elegant, the neckline distinguishes well the head from the shoulders.

Of oriental type and of medium size, the body is long, tubular and firm. When touched it is of an astonishing thickness. It is athletic and slender, with a firm and soft musculature. The shoulders and the hips have the same breadth. The bone frame is thin.

The tail is harmonious with the length of the body and the height of the paws. Siamese and Oriental: whip-like, the long tail ends with a point. Balinese and Mandarin: long and thin, the tail is abundant and carried with lightness, like an ostrich feather.

Long and elegant, the paws are in harmony with the length of the body. Their bone frame is thin and the musculature is firm.

The feet are oval and small.

In the Siamese and the Oriental, the hair, very short, thick and shiny, is well lying on the body. The texture is thin and silky.

In the Balinese and the Mandarin, the hair, semi-long and thin, is silky and lies on the body. There is practically no down-hair. The hair is shorter on the shoulders and gets longer on the sides. The back and the tail are well abundant. It must not have any ruff.

Neither fat nor thin, its thinness must not be mistaken with meagerness. 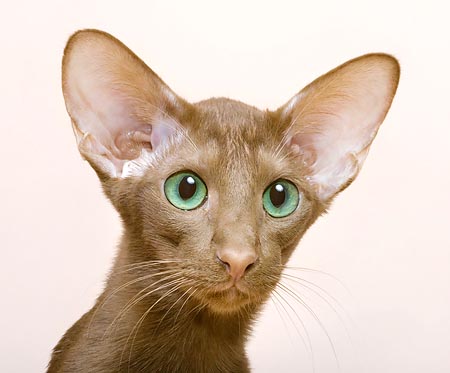 The Siamese and the Balinese are colour point. There must be, therefore, a clear contrast between the colour of the points, which is the most homogenous as possible, and that of the body, which is uniform.

The absence of ghost marks is desirable, with in any case a tolerance in the tabby cats.

It must be kept in mind the effect of the age and of the base colour on the evolution of the pattern colour point: the points are often not completely developed in the kittens, especially in the diluted shades, whilst some darker shadows on the body of a mature cat are normal.