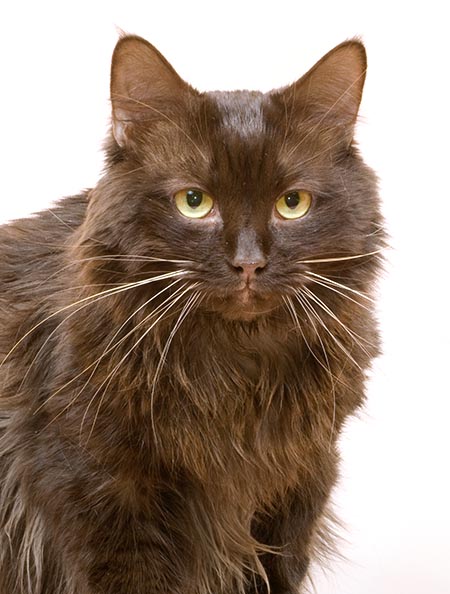 The York Chocolate can be chocolate or lilac © Giuseppe Mazza

It is a gay, energetic and playful cat who tends to develop a more exclusive relationship with one member of the family.

Almost round when seen from the front, the head is medium-sized. Seen from the profile, the front is slightly convex and there is, without any interruption, a slight concave slope between the front and the nose. This one is straight or slightly curved.

Of medium length, the muzzle is neither pointed nor rounded. The chin is firm. The eyes, oval, are big and well open. They can be gold or green. The blue eyes or uneven (one blue eye and the other green or gold) are accepted in the part-color. Ears: As high as broad at the base, they are placed at equal distance from the sides and the summit of the head. They are well furnished. Quite long, the neckline may seem shorter than what it really is due to the thickness of the fur.

Of semi-foreign format, the body is elegant and also muscled. The paws, long, are thin but with a strong musculature. The feet, rounded, are rather small. Quite thick at the base, the tail is rather long, even if in proportion with the body.

Thin and silky, the fur is dense but with very little down-hair. Short and irregular on the shoulders, it gets longer gradually on the sides for reaching its full length on the belly and the knickers. There may be a ruff depending on the season. The tail is well furnished.

The only two accepted colours are the chocolate and the lilac, which must be the most possible deep and uniform. The proportion of white in the part-colors goes from one third to half of the surface of the cat. The kittens may have some tabby marks (ghost marks) or a slight colouration of the hair resembling to some tipping.