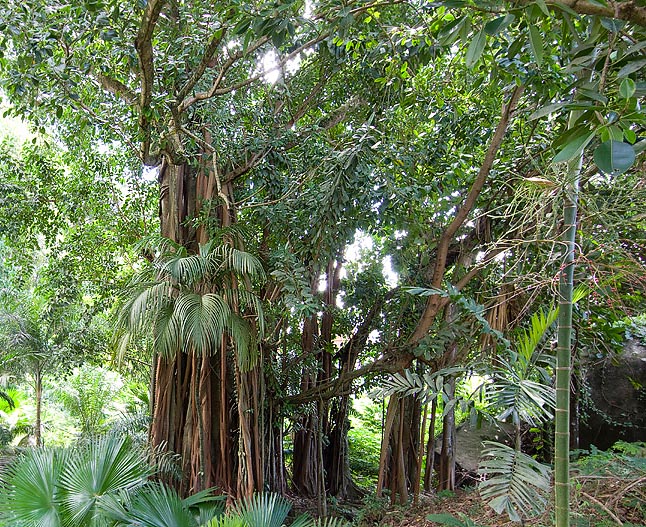 The species is native to India and Pakistan, where it grows in the forests up to about 600 m of altitude in areas characterized by monsoon climate.

The name of the genus is the Latin one utilized for the common fig (Ficus carica); the Latin name of the species “benghalensis” = of Bengal, refers to one of its zones of origin.

The Ficus benghalensis L. (1753) is an evergreen, up to about 20 m tall, tree with grey and smooth bark and with an ample crown which can expand for more than 100 m, supported by the numerous aerial roots which reach the soil and which, getting bigger and melting, form a sort of adventitious trunks. The leaves, on a robust pubescent and 2-6 cm long petiole, are alternate, of ovate to elliptic shape, of 8-26 cm of length and 7-20 cm of breadth, with entire edge and obtuse apex, coriaceous, of a glossy intense green colour on the upper page, pubescent below, with central vein and 4 to 7 pairs of lateral pale green nervations; the new leaves are bronze coloured.

The inflorescences are syconia, that is hollows of the fleshy walls which surround completely the flowers, accessible only through an apical opening, enclosed by three tiny scales (typical example, those of the common fig, Ficus carica). The syconia are axilalr, sessile (without petiole), produced in pair, of globose-depressed shape, of about 2 cm of diameter, of a colour from orange to red when ripe, with female and male flowers present at the same time in the syconium.

For the fructification is indispensable the presence of the pollinating insect, as it is known, to each species of Ficus corresponds a specific insect of the family of the Agaonidae (in our case, the Eupristina masoni Saunders, 1882), which, in turn, may reproduce only if it is present the species of Ficus to which it is associated; the small fruits (achenes) contain one seed only.

It propagates by seed, placed superficially on organic, sandy substratum, kept constantly humid, in luminous position at a temperature of 22-24 °C, the germination may be slow; in the wild it may grow up initially as epiphytic on other trees, surrounding their trunk with its roots which reach the soil, and eventually ends up in “strangling” them after a certain number of years.

In spring it reproduces also by cutting and by air layering in summer.

One of the most ornamental species of the genus Ficus, it requires a tropical, subtropical climate and, marginally, a warm temperate one, where it can resist for a short time to temperatures around the -2 °C, possibly with damage to the foliage, in full sun or partial shade.

It is not particularly demanding about the soil and is fairly resistant to the drought and the saltiness.

Utilized as shade tree in parks, vast gardens and along the streets, it acquires also deep religious significances for the origin area populations; at the moment of the planting, the superficial and invading rooting apparatus is to be well kept in consideration, a position sufficiently far away from buildings, roads and pavements is therefore to be chosen. The leaves, particularly appreciated by the elephants, are utilized as fodder for the cattle and from the bark they get fibres for fabricating ropes; the fruit is edible, but with a not particularly pleasant taste, in fact, this was consumed only in famine periods.

Cultivated in pot for inner spaces decoration, it requires a sufficiently luminous position and a well drained substratum maintained moderately humid, with winter temperatures over the 14 °C; one of the problems that can be encountered is the premature leaves fall, which is often caused by incorrect waterings, both in excess and in defect. Finally, all parts of the plant are used in the traditional medicine for various pathologies.