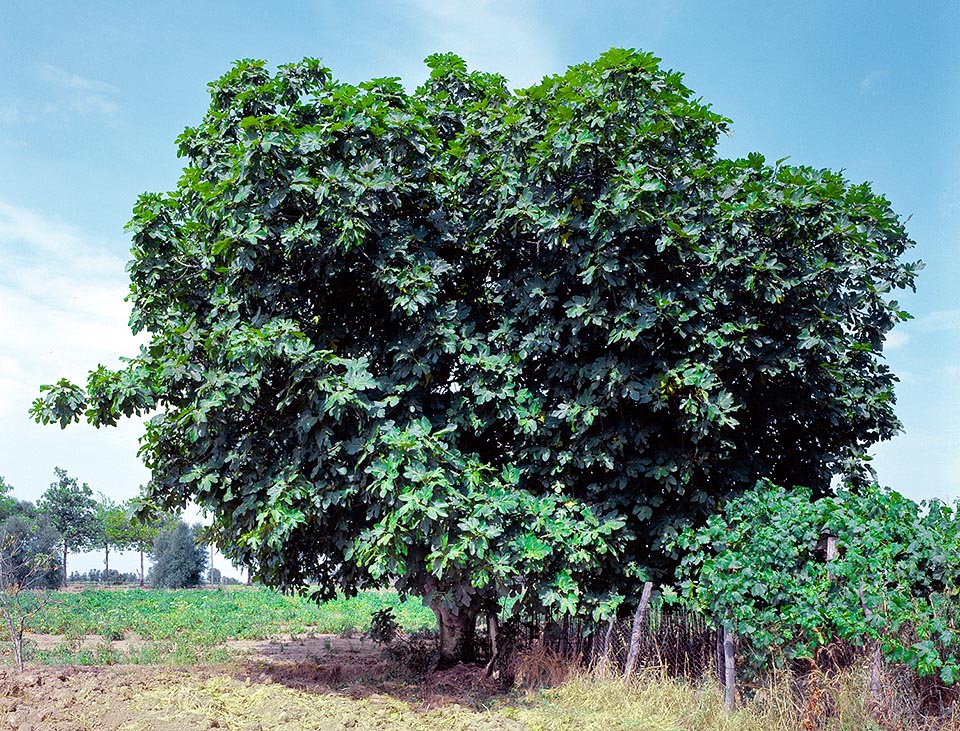 A majestic domestic fig. Even if it rarely exceeds 4 m of height, can reach the 10 m with an imposing perimeter. An adult tree can give 100 kg of fresh figs each year, that is about 30 kg of dried figs. Mediterranean species that adapts to various types of soils withstanding the drought and some varieties tolerate the frost up to about -15 °C © Giuseppe Mazza

The Common fig (Ficus carica L.) belongs to the family of the Moraceae (Order Urticales).

The genus Ficus gathers more than 600 species, mainly localized in the warmest regions of the world. We are in presence of an archaic family, already present in various forms in the Crestaceous and in the Jurassic, that is in the early days of the plants equipped with flowers.

In the Mediterranean area among the fruit trees is diffused and cultivated the Domestic fig (Ficus carica var. domestica), that in Italy is present in all regions. 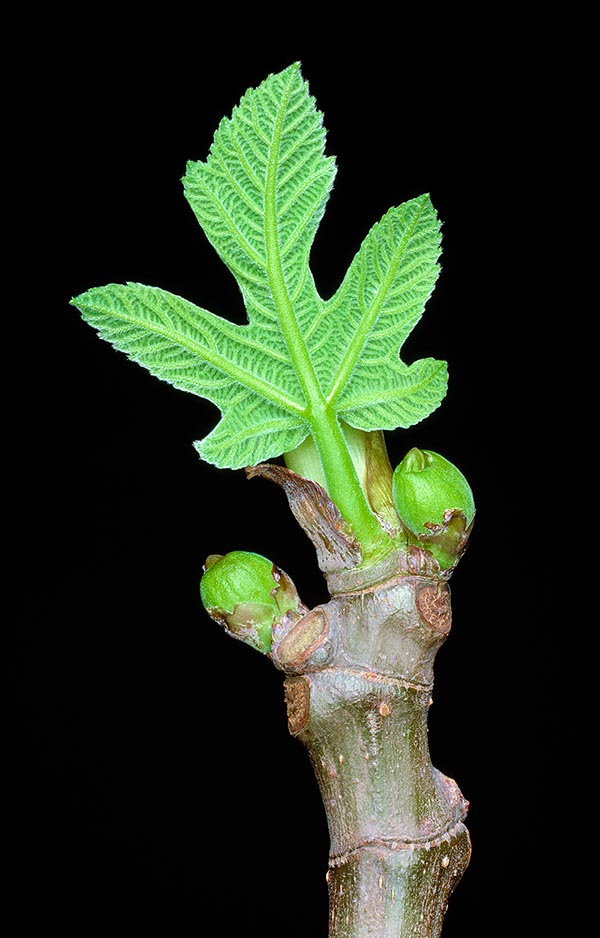 A leaf growing between two floriferous buds. The Ficus carica is a species characterized by a remarkable heterophylly. In fact on the same plant it can show leaves of various forms and dimensions, even 25 cm long with a number of lobes varying from 3 to 7. They are deciduous, grossly toothed, with a long petiole © Giuseppe Mazza

The name of the genus is the one the Latins gave to the fig, whilst the species refers to the Caria, the region of Asia Minor in which it was thought to be native. In Greece the edible fig was called “sykon”, from where comes the botanical term syconium to indicate the false fruit.

The “fruit”, commonly called fig, like the plant, is actually a fleshy, hollow “receptacle”, covered inside by small flowers and communicating to the outside with a small opening (ostiole).

The tree has medium large dimensions, grows quickly and the branches extend a lot, at times curving towards the ground, giving the plant an irregular appearance.

Vigorous roots, tending to explore extended surfaces of the soil, twisted and branchy trunk, with smooth bark of ashy colour.

The leaves are big, consistent, rough, pubescent below, cordate at the base, rarely entire, almost always divided in three to seven unequal lobes, grossly toothed in the margin.

A frequent heterophylly characterizes the leaves, phenomenon that allows often to observe on the same tree, unilobate and polylobate leaves. The number of the lobes and their size are often in relation with the variety.

On the domestic fig the flower buds are located on the branches of the year, in the terminal part, whilst on the two or more years old branches are the wood gems, that sprout vigorous when the previous year branch is removed by pruning.

The one year branches are provided always with one or two terminal wood gems, that are acuminate and covered by scales.

Under the terminal bud, between short internodes, we note wide scars indicating the insertion of the leaf of the previous year, while close scars, smaller, indicate the point where where inserted the figs.

Between these traces emerges a small oval gem, pointed, woody, often in company of a fruit bud, of roundish shape. The fructification of the fig is different depending on the cultivar, but influenced also by the environmental conditions. 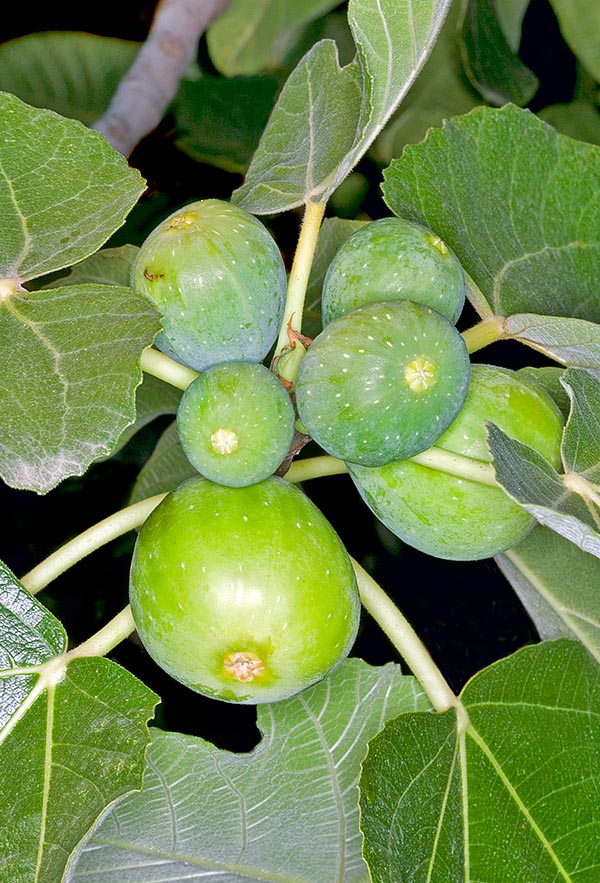 Actually, the fruit is a particular inflorescence called syconium that then transforms in infructescence: a fleshy receptacle, covered inside by small flowers with a very small apical opening called ostiole, entrance for the Blastophaga psenes, the very small wasp who is in charge of the pollination © Giuseppe Mazza

The Common fig includes two biological forms, the Fig and the Caprifig, that for centuries have generated the curiosity and many doubts among the botanists.

The ancient drawings already show us the fig in the two different forms. One with edible fruits and the other non-edible, as dry and towy.

The name of Caprifig (from the Latin “caprificus” ), from “ficus” and “capra”, that is, fig of the goats, gets its origin from the fact that the plant usually grows in inaccessible sites and also in the cracks of rocks and walls.

In the caprifig succeed each other three types of inflorescences (syconia) during the year.

A first production appears in October, and is represented by the “moms”, that last the whole winter up to April, stuck over the scars left by the fallen leaves. This phase corresponds to the “cimaroli” of the “triferous” varieties of the domestic fig.

The second generation is formed by “caprifigs”, that ripen in June and July and grow in the terminal part of the branch, on the freshly produced wood, over the “moms”, and correspond to the “early figs” of the domestic fig.

In summer develop the “mammoni” whose presence lasts until the end of summer and corresponds to the “late” figs.

The phenological sequence of the caprifig is well characterized and strictly linked to the odd and in the meantime complex biology of a small wasp (Blastophaga psenes L.) that has the function of pollinator. In the Mediterranean regions, in late spring, during the warmest hours of the day, it is possible to observe these tiny “black flies” flying in proximity to the caprifigs and trying to reach, with some difficulty, the cavity of the ostiole.

The fig can be pollinated naturally only by this small insect, that in its turn can reproduce exclusively in presence of the receptacles of the figs. Each one of the two consequently needs the other to ensure the natural reproduction.

Every species of the genus Ficus make use of one specific pollinating insect, that undertakes the operation for necessity of reproduction.

In the caprifig the Blastophaga psenes faces this forced introduction in order to be able to lay the eggs in the inner female flowers, ready to welcome the ovideposition and permit, inside them, the completion of the biological circle starting from the floral galls. The sequence reveals definitely complex and develops in function to the different sexuality between domestic fig and caprifig. 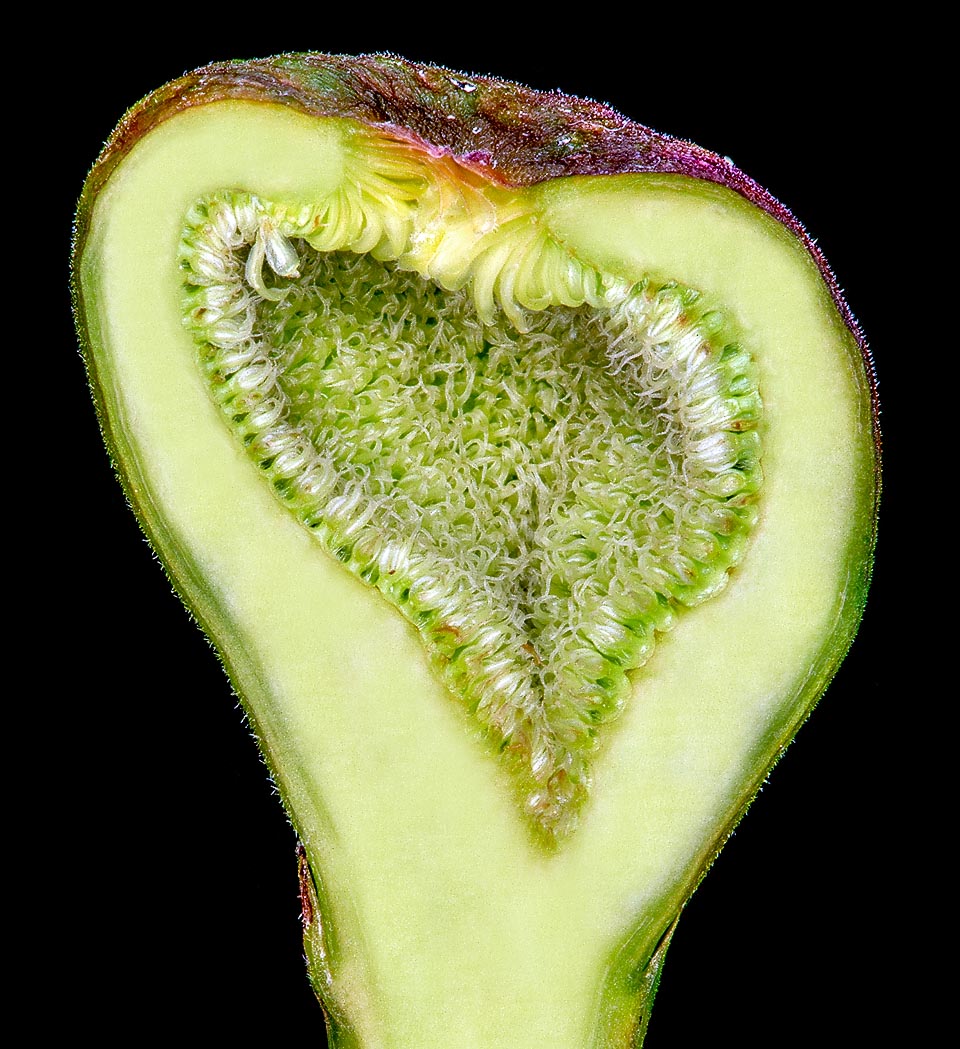 Wild fig section. On top, close to the ostiole, are concentrated the male flowers; all others are female, intended to produce the seeds © Giuseppe Mazza

Therefore, in nature we find two types of figs: one functionally male, pollinator and not edible (caprifig): the other, functionally female and edible (domestic fig). In brief, the fig is morphologically monoecious and functionally dioecious.

At this point, to better understand the complexity of the interaction between fig and insect it is necessary to observe the morphology of the small flowers inside the syconium. In the same receptacle we can find male and female flowers. These last are represented by flowers called “brevistylous” or “galligen” and “longistylous” that, depending on the variety, may be sterile or fertile. The caprifig has male and female flowers, unlike the domestic fig that has only female “longistylous” flowers. 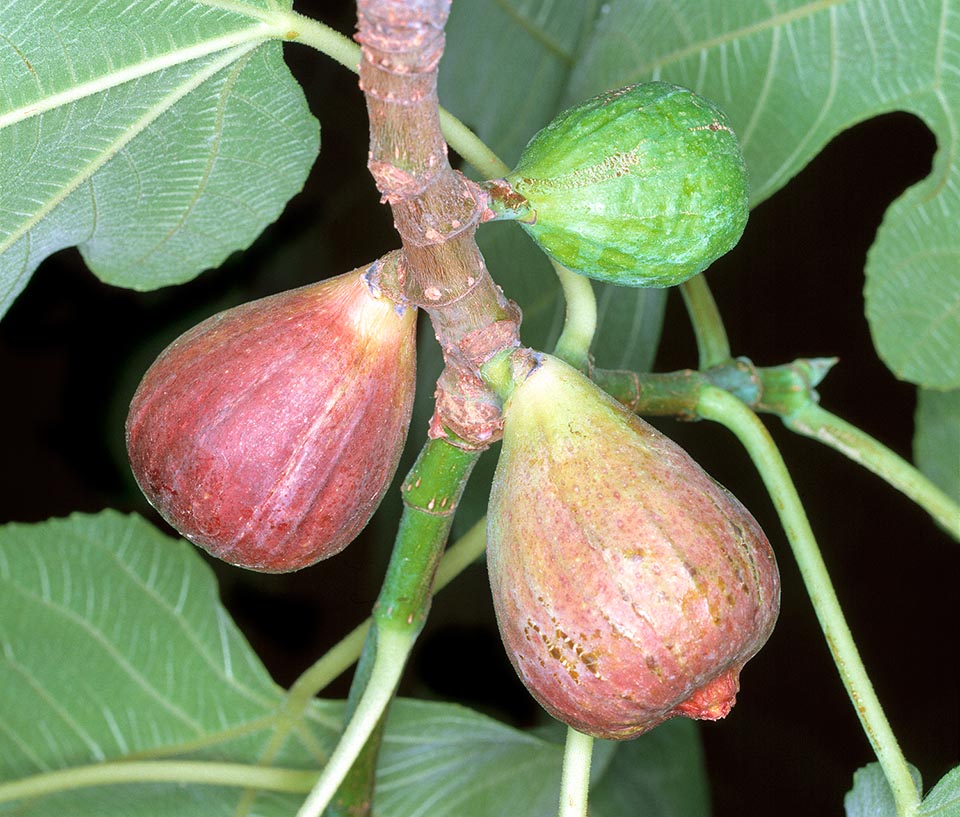 Some varieties fructify only once per year giving fruits called “early figs” when ripening in early summer and “late figs” if collected in autumn; others twice a year giving “early figs” before and then “late figs”; others three times with “early figs”, “late figs” and “cimaroli”, those remaining on the plant during winter as for the Caprifig © Giuseppe Mazza

In the caprifig the infructescences “mom” host the tiny blastophages that effect the ovideposition in the “brevistylous” flowers. The males of the larvae grown in the galls fecundate the females and die in the receptacle without getting out. The females flutter in May and fly to the “caprifigs” to deposit the eggs in the galligen flowers.

By the month of July, the females of the new generation are ready to swarm towards the “mammoni”, but, while crossing the ostiole of the syconium to reach the light, they get covered by the pollen of the male flowers produced in huge quantity. 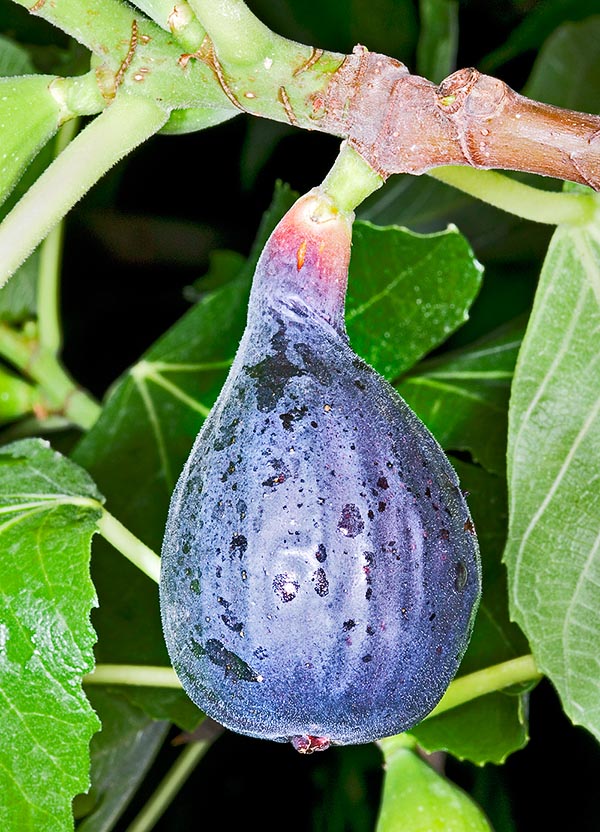 The reproductive cycle of Blastophaga psenes is complex, with births and matings inside the fruit, but many cultivars are parthenocarpic, with sterile longistylous flowers that ripen without the need of the insect © Giuseppe Mazza

Inside the “mammoni” the females lay the eggs, but as the mammone is provided also of longistylous flowers, these last are accidentally fecundated with the pollen transported by the insects.

In this last phase of the flight of the blastophages towards the “mammoni”, it may happen that in proximity stand domestic figs.

From this casual phenomenon was born the old practice of the “caprification”, with the placing on the branches of the domestic fig branches of caprifig with “mammoni” bearing pollinating blastophages.

The practice foresees to collect whole syconia, in various number, at times even 20 and to stick them to a rush or jute thread, and to hang them on the branches of the plant that we want to caprify.

This practice is not necessary for the greatest part of the cultivars that are parthenocarpic, that is they have sterile longistylous flowers and reach the pomological ripening without the help of the pollinating blastophage.

There are however some biferous varieties that in order to ensure the production of late figs need the caprification, otherwise the fruits fall prematurely.

Other figs can take advantage of the caprification, as well as some particular parthenocarpic varieties that improve their organoleptic qualities.

It is also worthwhile to consider that for other varieties the caprification may affect negatively the quality of the fruits.

The multiplication of the fig can be done also by cutting, sowing and offshoot.

The good growth of the fig is usually favoured by abundant summer irrigations also by rich organic fertilizations.

Ficus carica was last modified: May 30th, 2019 by Giuseppe Mazza