The species is native to tropical Africa (Angola, Cameroon, Central African Republic, Democratic Republic of the Congo, Ethiopia, Gabon, Ghana, Guinea, Liberia, Malawi, Mozambique, Senegal, South Africa, Tanzania, Zambia and Zimbabwe), Comoros Islands, Madagascar and Seychelles where it grows in the forests, humid as well as semi-arid, savannahs and swampy zones, from the sea level up to about 1000 m of altitude.

The Ficus lutea Vahl (1805) is a shrub or an evergreen or briefly deciduous tree, 10-30 m tall, with ample crown, up to more than 40 m wide, with low trunk with greyish, smooth bark that tends to crack with the age, provided at the base, of tabular roots (flat roots similar to buttresses that contribute to its support), and aerial roots from the branches.

Usually epiphyte in the initial phase of the growth, becomes then terrestrial when the roots reach the soil and enlarging are capable to sustain it, often “strangling” the host species. 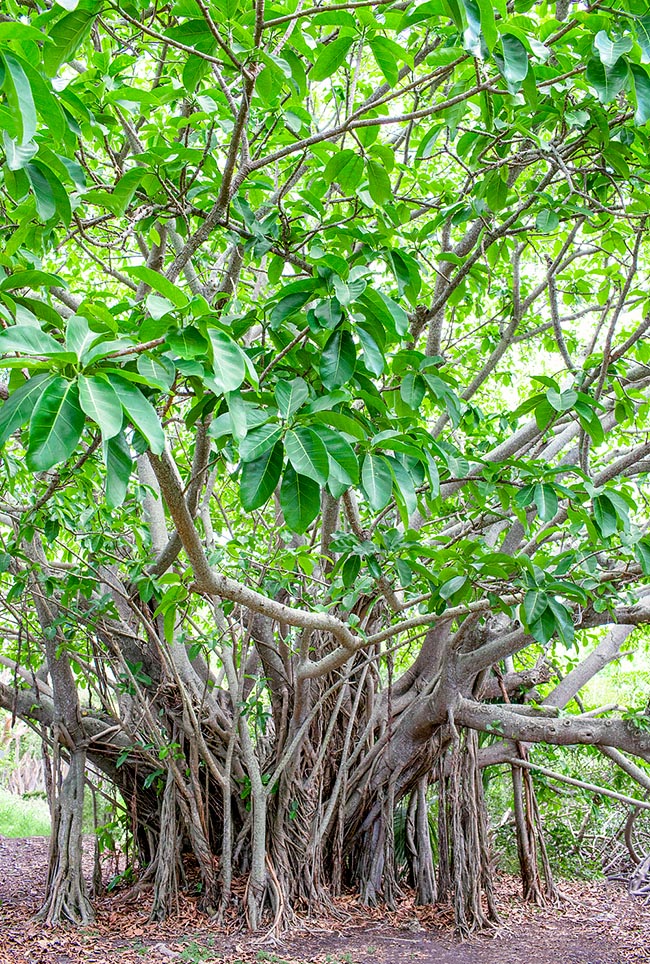 The leaves, on a 2,5-10 cm long petiole, are simple, alternate, oblong-ovate with obtuse or sub-acute apex and entire margin, 12-40 cm long and 7-18 cm broad, of glossy intense green colour above, slightly paler below, with 6-10 secondary veins on the sides of the central one, of greenish yellow colour. The leaves during the initial phase of the growth are protected by a stipule (appendage at the base of the leaf), 2-5 cm long, deciduous, of brown colour.

The inflorescences are cavities with fleshy walls, called syconia, that completely enclose the flowers, with a small apical opening that allows the access to the pollinating insects. The syconia are sessile, usually in pair at the axil of the leaves or immediately under the leafed part, globose, of 1-2,5 cm of diameter, initially pubescent, then glabrous, usually yellow, at times reddish, subtended by three coriaceous bracts of brown colour, persistent, of 6-8 mm of length and breadth, with apical opening (ostiole) more or less prominent, of about 2 mm of diameter, enclosed by three tiny scales. As known, to each species of Ficus is associated a pollinating insect of the family of the Agaonidae (in our case Allotriozoon heterandromorphum Grandi, 1916), that in turn can reproduce only if is present the species to which is associated (obligate mutualism). The syconia are an important source of food for the frugivorous fauna that contributes to the dispersion of the seeds that often germinate in the cracks of the trunks and branches, but also in those of the walls or pavements, if suitable conditions are present.

It reproduces by seed, put superficially on organic loam, sandy, maintained constantly humid, but without stagnations, in a luminous position at a temperature of 24-28 °C, but usually recourse is done to the cutting and air layering.

Very ornamental species of fast growth suitable for large gardens, parks and ample alleys of the tropical, subtropical and mildest temperate-warm regions, where temperatures just under the 0 °C are short lasting exceptions, keeping always in mind, in its collocation, the great dimensions it may reach, the extended rooting apparatus, superficial and invasive, dangerous for handworks, sewerage network, sidewalks and roads, and not last the fruits that when falling on walkable areas may create many inconveniences. It requires full sun or slight shade and is not particular for the soil, provided draining, resists winds, even if salty, and when adult may bear periods of dry. Young specimens can be very decorative in pot for luminous indoor spaces and is also an excellent subject for bonsai.

Bark and leaves are utilized in the traditional medicine for various pathologies; laboratory studies have evidenced an anti-diabetic activity of the extracts of the leaves of possible interest for the official pharmacopoeia.