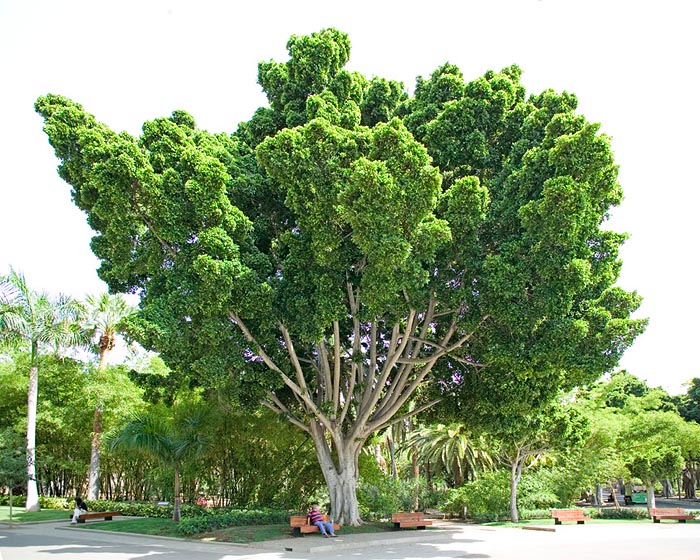 The name of the genus is the Latin one utilized for the common fig (Ficus carica); the name of the species is the combination of the Greek terms “mikrόs” = small and “karpόs” = fruit, with obvious reference.

The Ficus microcarpa L.f. (1782) is an evergreen, up to about 25 m tall tree with ample and expanded roundish crown and trunk of 6o cm of diameter with greyish bark; on the branches of the adult plants may form aerial roots, in particular in the humid climates, which, at times, reach the soil.

The leaves are alternate, almost elliptic, 4-10 cm long and 3-5 cm broad, leathery, of glossy dark green colour, with entire edge and obtuse apex. The inflorescences are syconia, that is, hollows with fleshy walls which entirely enclose the flowers, accessible from an apical opening surrounded by three tiny scales (typical example, those of the common fig, Ficus carica). The syconia, produced on the young branches as well as on the oldest ones already without leaves, are axillar, sessile (without petiole), in pair, of globose-depressed to piriform shape, 6-9 mm of diameter, of colour from yellow to blackish red when ripe, with female and male flowers present at the same time on the syconium.

For the fructification, the presence of the pollinating insect is necessary, as it is well known, to each species of Ficus is associated a specific insect of the family of the Agaonidae (in our case, the Eupristina verticillata Waterston, 1921), which, in turn, may reproduce only if the species of Ficus to which is associated is present; the fruits (achenes), ovoid, contain one seed only. It propagates by seed, placed superficially on organic, sandy, substratum, kept constantly humid, in luminous location at a temperature of 22-24 °C; it may grow as epiphyte on other trees or on walls and roofs. It reproduces also by cutting in spring and air layering in early summer.

Very spread and appreciated species due to the fast growth and the elegant top, expanded and thick, in the tropical, subtropical and marginally warm temperate climate, where it can resist, when adult, to exceptional drops in temperature to about -3 °C for a very short time, even if with damage to the foliage. It is utilized as shade tree as isolated specimen, in parks and vast gardens, as well as road tree. It is not particular about the soil; even if poor and can resist, when adult, to drought periods, has also a fairly good resistance to the wind and the saltiness and stands quite well the pruning; downsides are the abundant production of fruits, annoying when they fall in areas of passage, and the rooting apparatus, superficial and invasive, of which we have to carefully take into account when planting it, choosing a position sufficiently distant from buildings, roads and pavements.

It is very diffused a pot plant for the decoration of external and internal spaces, in much luminous position, in soil rich of humus with addition of coarse sand or agri-perlite around the 30% and winter temperatures over the 12 °C; the watering must be abundant in summer, avoiding in any case the stagnations which may reveal dangerous and allowing the soil to dry up almost completely before watering again, moderate in winter. It is a subject particularly suitable for bonsai.

Parts of the plant, in particular the bark, roots and leaves, are utilized in the traditional medicine for various pathologies.