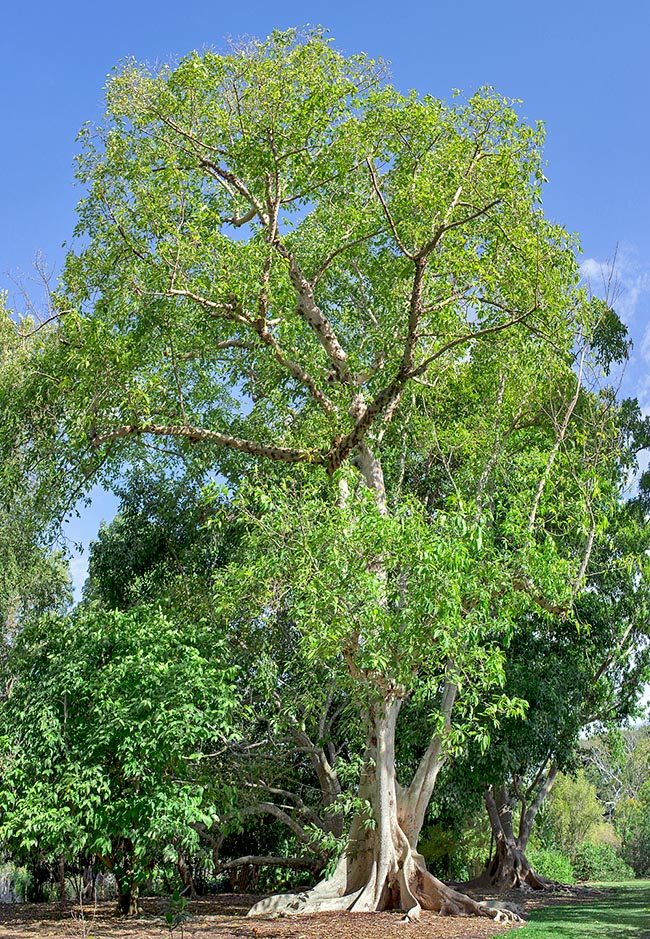 The species is native to Australia (northern Western Australia, Queensland and Northern Territory), Bangladesh, Cambodia, China (Guangxi, Guizhou and Yunnan), India, Indonesia, Laos, Myanmar, Nepal, New Guinea, Pakistan, Sri Lanka, Thailand and Vietnam) where it grows in the humid forests at the margins of water streams and in swampy zones, from the sea level up to about 1500 m of altitude.

The Ficus racemosa L. (1753) is an evergreen monoecious tree growing where it can draw water in continuity, or shortly deciduous, milky, 10-30 m tall, with trunk having smooth bark from grey to brown-reddish, of up to about 1 m of diameter, at times provided at the base of tabular roots (flat roots similar to buttresses that contribute to its support) and eventually of few and short aerial roots from the branches.

The leaves, on a slightly pubescent 2-7 cm long petiole, are alternate, simple, ovate-lanceolate or elliptic with obtuse or sub-acute apex with entire margin, 5-18 cm long and 3-8 cm broad, of glossy intense green colour above, paler and opaque below, with 4-8 pairs of prominent lateral veins, together with the central, in the lower page. Stypules (appendages at the base of the leaf that protect it during the initial stage of growth) ovate-triangular, 1,5-2 cm long and 0,5 cm broad, pubescent, semi-persistent. The inflorescences are cavities with fleshy walls enclosing the flowers, called syconia, accessible to the pollinating insect from a small apical opening (ostiole) covered by 5-6 bracts, that when ripe form a false fruit. The syconia are arranged numerous in thick clusters directly from the trunk or from the main branches having no leaves (cauliflory), globose-depressed to pyriform, of 2,5-3,5 cm of diameter, initially green, then reddish or orange when ripe, often with darker stripes; the real fruits are tiny and contain only one seed about 1 mm long.

As it is known, to each species of Ficus is associated a specific pollinating insect of the family of the Agaonidae (in our case Ceratosolen fuscipes Mayr, 1885), that in its turn may reproduce only is present the species of Ficus to which is associated. The figs are consumed by various species of frugivores that contribute to the dispersion of the seeds. 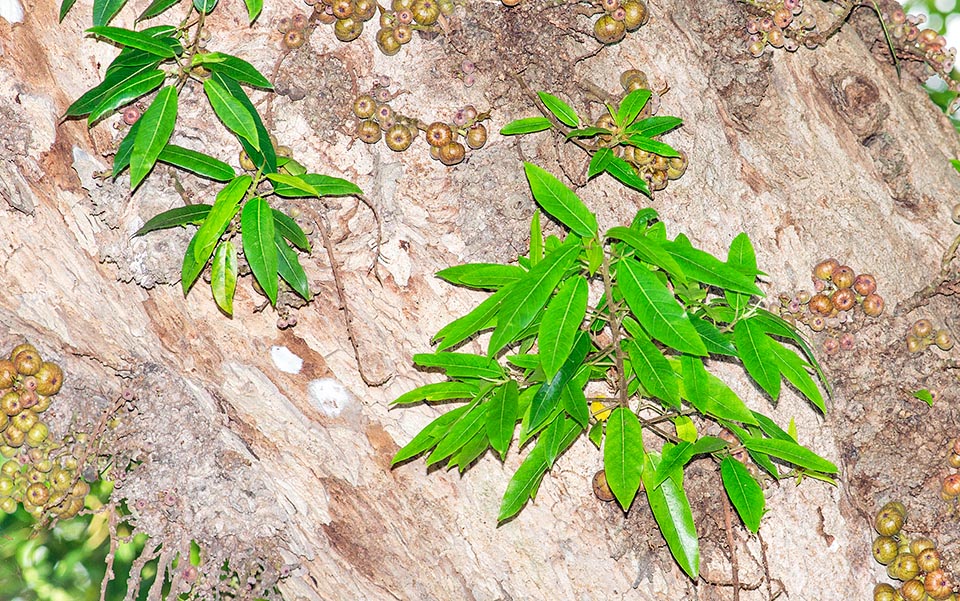 The trunk at times shows tabular roots and can reach 1 m of diameter. The leaves, alternate, glossy green, can even be 18 cm long © Giuseppe Mazza

It reproduces by seed, just interred in sandy draining loam maintained humid at the temperature of 24-26 °C, and by cutting and air layering.

Amply diffused tree in nature in South East Asia, particularly in India, and also cultivated in the villages for its fruits, the utilizations in the traditional medicine and as shade tree, sacred to Buddhism and Hinduism, it has an important rôle in the traditions and in the rites of the local populations.

It requires full sun or slight shade and can be utilized as isolated specimen in great gardens and parks of the tropical and humid subtropical climate regions, where it represents an attraction point thanks to its clusters of fruits scattered on the trunk and the main branches. It is not particular about the soil, provided draining, maintained preferably constantly humid; moreover it is an excellent subject to cultivate in pot as bonsai. 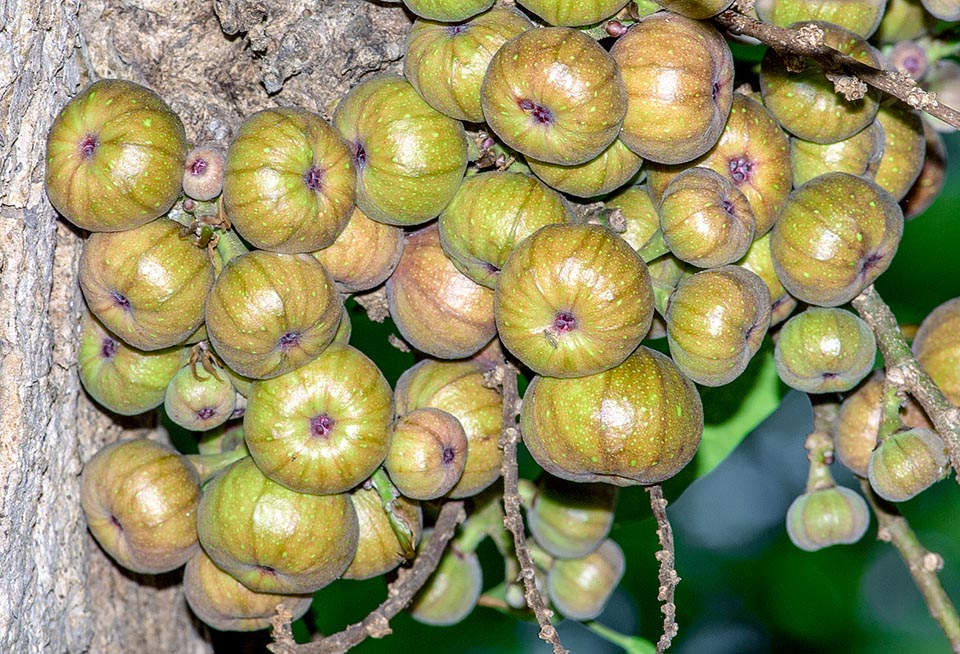 Sacred tree for Buddhism and Hinduism, is cultivated mainly in India. The fruits are edible and various parts of the plant display medicinal virtues © Giuseppe Mazza

The fruits are locally consumed as they are or as side dish or under form of preserves. Various parts of the plant are utilized in the traditional medicine, Indian in particular, for various pathologies; laboratory studies have evidenced the presence of compounds with analgesic, antidiarrheal, anti-inflammatory, antioxidant and hypoglycemic activities liable of further investigations.