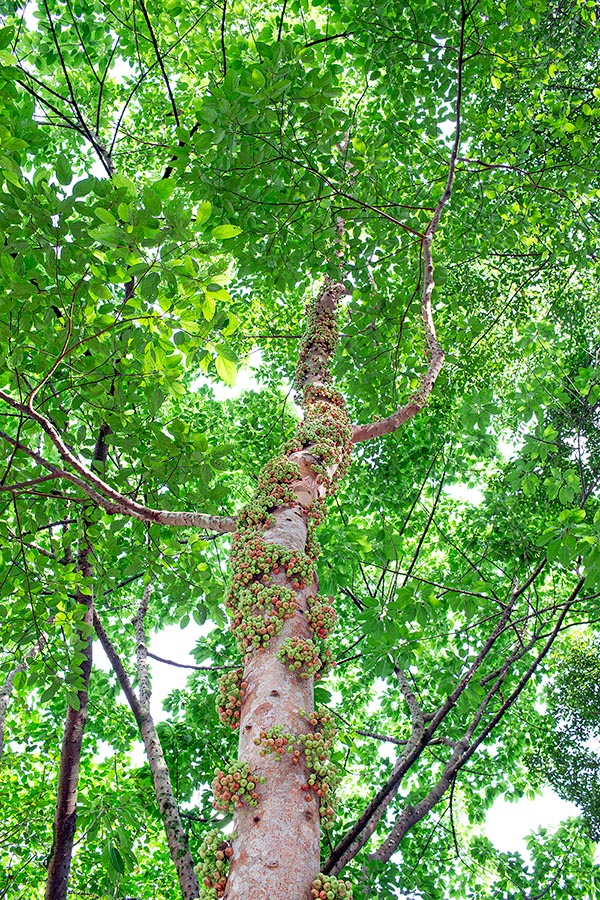 The name of the genus is the Latin one utilized for the Common fig (Ficus carica); the specific one is the Latin adjective “variegatus, a, um” = variegated, with reference to the colour of the fruits.

The Ficus variegata Blume (1825) is an evergreen or deciduous for short period tree, dioecious, usually up to about 15 m tall, but the old specimens in nature may exceed the 30 m, with erect trunk up to more than 1 m of diameter endowed at the base of tabular roots (flattened roots similar to buttresses) and smooth bark of grey-brown colour; from the wounds exudes an abundant milky sap.

The leaves, on a 2-6,5 cm long petiole, are alternate, simple, ovate-elliptic with entire margin, wavy or lightly toothed, obtuse or acuminate apex and prominent veins, coriaceous, 10-25 cm long and 5-15 cm broad, of intense green colour above, pale below; deciduous stipules (appendages at the base of the leaf that have the main purpose of protecting it during the initial phase of growth), ovate-lanceolate, glabrous or slightly pubescent, 1-1,5 cm long.

The inflorescences are hollows with flesh walls, called syconia, that enclose wholly the flowers, accessible through an apical opening wrapped by 3 tiny scales. The syconia, grouped on short tuberculate branches on a 2-4 cm long peduncle, arise on the stem and the old branches devoid of leaves (cauliflory), are globose, depressed globose or pyriform, of 2-3,5 cm of diameter, of red colour with pale green stripes and spots when ripe, with male and female flowers on different individuals; the tiny fruits (achenes) contain only one seed. The pollination is done by an insect belonging to the family of the Agaonidae, in our case Ceratosolen appendiculatus Mayr, 1885, as known to each species of Ficus is associated a specific insect, that in its turn may reproduce only in presence of the species to which it is associated.

The fruits, produced abundantly and continuously during the year, are an important source of food for various birds and mammals of the forest, among which some primates, that contribute to the dispersion of the seeds.

It propagates by seed, planted superficially on organic substratum, sandy, maintained constantly humid at a temperature of 24-26 °C; it reproduces also by tip cutting in spring and air layering in early summer. 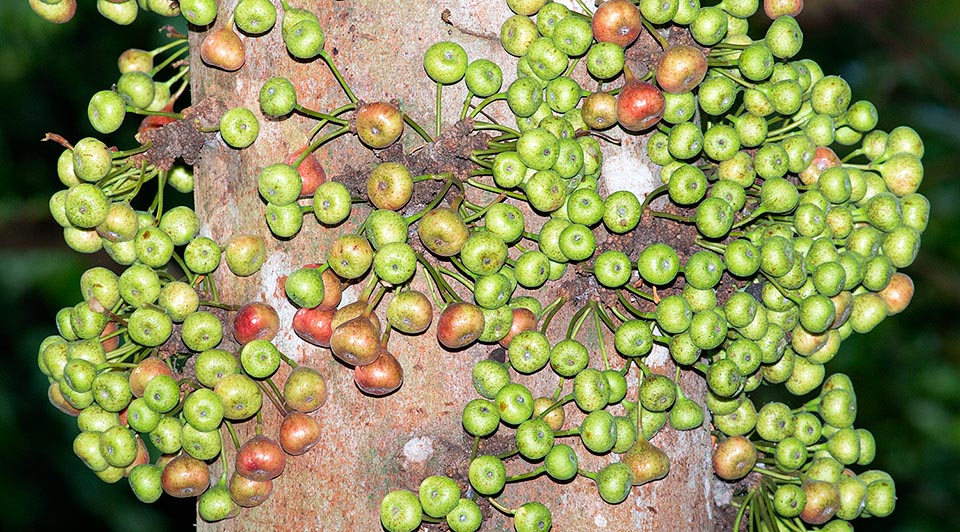 The syconia, grouped on short 2-4 cm peduncles, arise on the stem. The fructification, generous and almost continuouortant source of food for the forest animals that contribute to the dispersion of seeds. The dried fruits are at times consumed with rice also by local populations. Leaves and bark display therapeutic virtues © G. Mazza

Species diffused in a vast area of South-East Asia, from India to the Pacific islands, but little known outside the origin zones, present almost exclusively in gardens and botanical collections where it represents one of the attraction points due to the trunk and the branches devoid of leaves almost completely covered by the fruits, that would deserve a better diffusion as ornamental in the parks and gardens of the tropical and humid subtropical climate zones. Fast growing, requires full sun or slight shade and is not particular about the soil, provided well draining and maintained almost constantly humid. In its placing it must be taken into account the superficial and quite invasive rooting apparatus, therefore it is to be placed sufficiently far way from dwellings, roads and pavements. The wood, light and whitish, is used for inner coverings, cases, handicrafts and in the fabrication of the plywood, as well as fuel. The dried fruits are at times consumed with rice by some local populations; leaves and bark are used in the traditional medicine, in particular for dysentery.