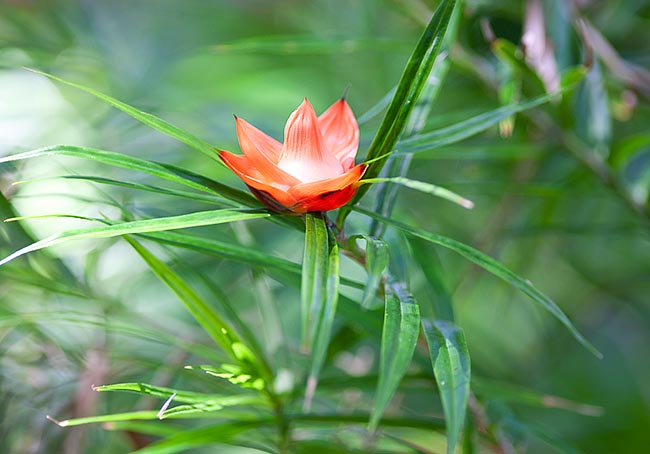 The species is native to the Philippines (Luzon), where it grows in the pluvial forests at low and medium altitudes.

The genus is honoured to the French admiral Louis-Claude de Saulces de Freycinet (1779-1842), leader of the expedition of circumnavigation of the planet during which the genus was described for the first time; the species is dedicated to the English naturalist and collector Hugh Cuming (1791-1865).

The Freycinetia cumingiana Gaudich. (1841) is a climbing dioicus (each individual carries either only male flowers or only female ones), rarely monoecious with unisexual inflorescences on the same plant, evergreen, with thin cylindrical stems, marked by the annular scars trace of the fallen leaves, 0,5-2 m long, which anchors on the trees and shrubs through the aerial roots. The leaves are alternate, amplexicaul (with the base embracing the stem), oblong-linear with pointed apex, 8-18 cm long and up to 2,5 cm broad, coriaceous, of dark green colour, thorny at the margins and on the central nervation in the lower page.

Inflorescences in spikes (3-4), cylindrical, compact, at the apex of the branches, enclosed in about 5 cm long bracts, of orange pink colour with long pointed apex. 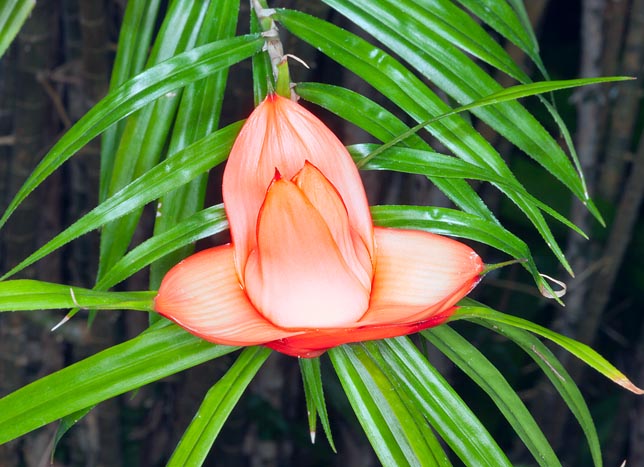 The fruit is a syncarp (aggregation of fruits grown at the same time and merged) cylindrical, about 2 cm long. It propagates by seed and, easily, by means the shoots it produces at the base or by piece of stem provided with roots. Among the more cultivated and ornamental of the genus, due to the showy long lasting bracts at the base of the inflorescences, it can be cultivated in open air only in the tropical and subtropical climate zones, where temperatures less than 10 °C are short lasting exceptions.

It can be grown leaning against a tree or a shrub or without support, in which case it assumes a rather procumbent habit.

Cultivable also in pot, in order to keep it sheltered in the coldest months in protected position, in soil rich of organic substance, with addition of siliceous sand or agri-perlite in order to improve the drainage, at the maximum possible luminosity and at lowest temperatures never under the 14 °C.