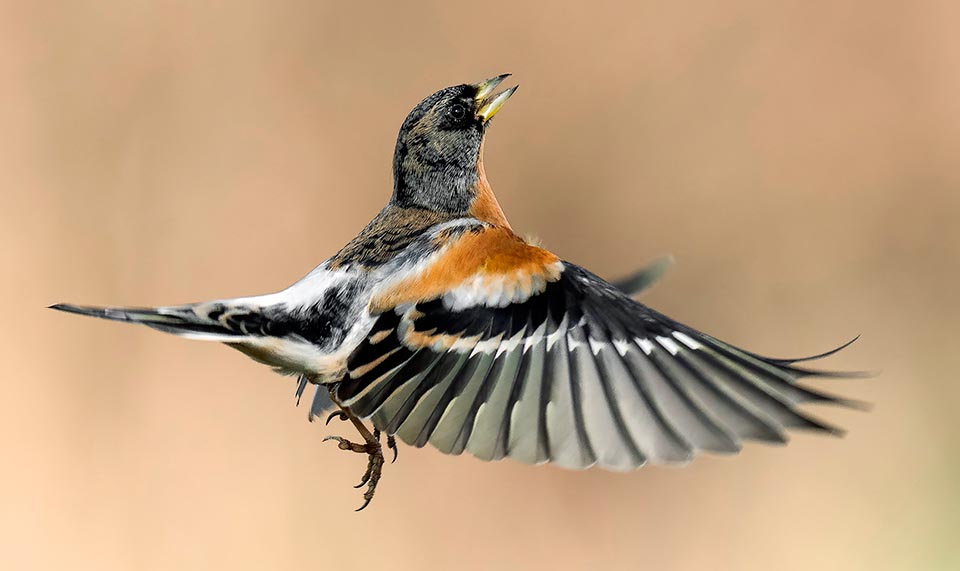 The Brambling or Mountain finch (Fringilla montifringilla Linnaeus, 1758) is a charming finch that belongs to the order of the Passeriformes and rightly to the family of the Fringillidae, a very vast group that includes small songbirds often very coloured.

It is practically the northern correspondent of our Chaffinch (Fringilla coelebs) and occupies the coldest area of the palearctic, reaching far more boreal latitudes than the congener. 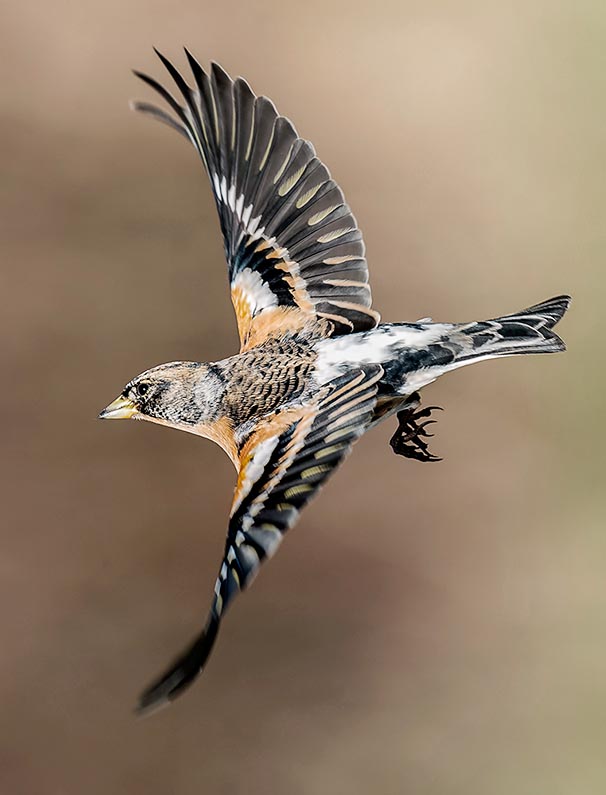 The most striking difference with the finch stands in the white rump, well visible in flight © Antino Cervigni

It has always been customary, in the local tradition of some populations, to give whimsical names to birds that alternated during the different seasons, in spite of technical classifications or scientific taxonomies for which there was not time to waste nor possibility of access.

Once the country was much more frequented than now, almost all the populations carried out agricultural activities and spent whole days in the fields and by sure did not have the time for studying the passing avifauna.

They had so the possibility to simply observe the nature with a more attentive and precise look, perhaps also of simple curiosity but often being able to combine the arrival of these newcomers to their agricultural exigencies. They saw the Cuckoo (Cuculus canorus) and the Swallow (Hirundo rustica) arriving and knew that they could plant potatoes or prepare and dig the small garden or they did observe the first autumnal Lapwings (Vanellus vanellus) and here they were ready to plow the fields and to sow the wheat.

In the Po Valley still now is repeated, perhaps without even knowing the meaning, that the arrival of the first waves of rooks (Corvus frugilegus), foretells in very short time the first autumnal frost. So it has always been and will be also in future.

Always in Lombardy, while not skimping in fantasy in nicknaming birds, insects and other elements of the nature, they used to call every coloured bird appearing in the plains in autumn, generically “franguen dè muntagna” = finch of the mountain, including in such names buntings, various fringillids and all what was unknown.

For what concerns the brambling never a nickname was so much right, seen that Linnaeus himself, but even before Gesner in the XVI century, when they did classify taxonomically this species, they rightly did call it montifringilla, from the Latin “montis” = mountain and “fringilla” = finch, literally mountain finch.

In Europe it has various names repeating the same scientific nomenclature. In English it is Brambling, in German Bergfink, in Spanish Pinzón Real, in French Pinson du Nord, in Portuguese Tentilhão-montês and in Italian, Peppola or Montano. 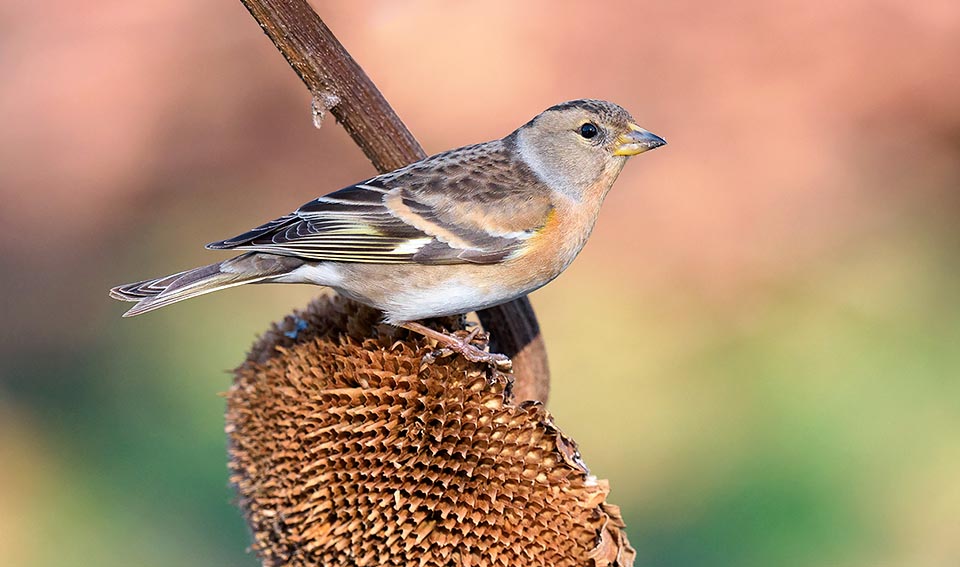 Only discordant term is the English one, even if related with its winter habits that calling it brambling wanted to connect it to its habit of frequenting brambles or banks full ot thorny bushes. However, a term borrowed from the old Saxon languagen brâma brǣmel brǣm that repeats its concept. But also the English vulgar had christened it with the nickname of cock of the north, fully recovering the Lombard concept.

The Italian name Peppola has not a well defined origin though the old ornithological literature of the XIX century considers it as an onomatopoeic term, more or less plagiarized from its particular escaping song. 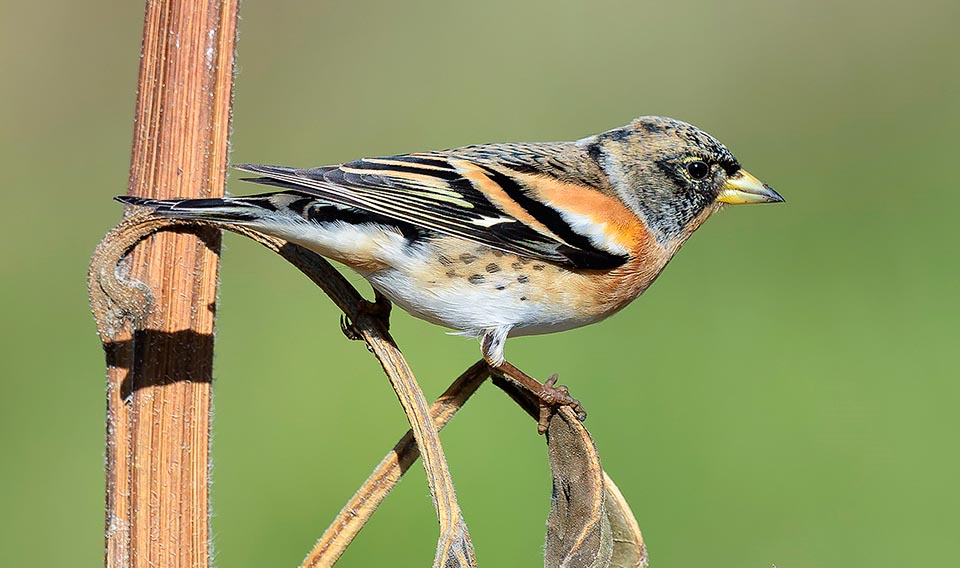 Here's a male in comparison. With much more bright tones in the reproductive period, the head, nape and rest of the back are black © Antino Cervigni

The Brambling is a finch typical to the Euro-Siberian zone with a very vast range covering, seamlessly, the continental Euro-Asian belt going from the Atlantic to the Pacific oceans.

Its range reached in the extreme north, the limit of the arboreal vegetation of the conifer forests of the taiga to which it is particularly related, stopping only when in front of the barren and desolate tundra. 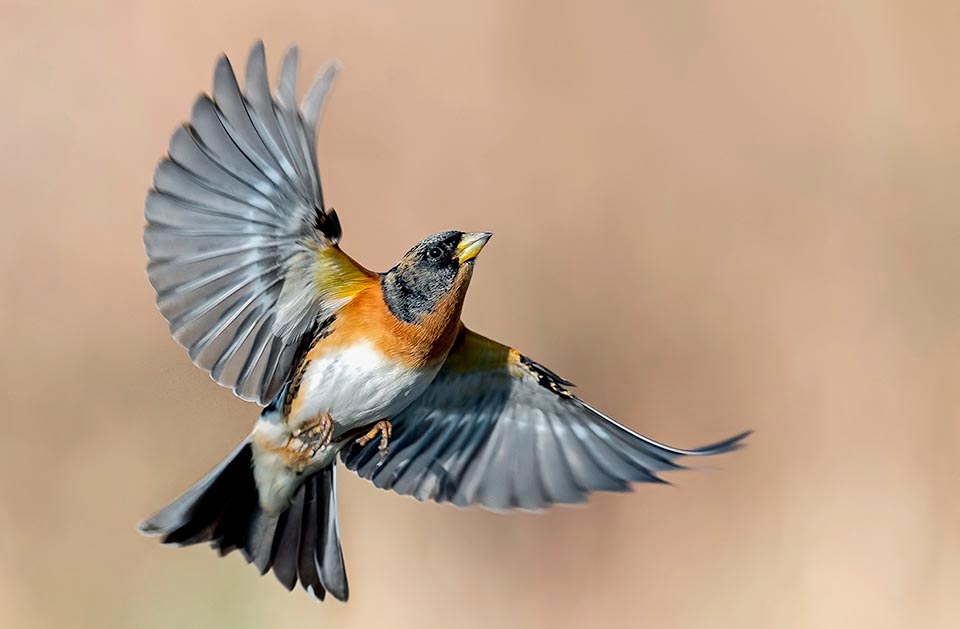 The southern boundary of its territory remains always at high latitudes lined approximately at the 55th parallel, going down slightly southward in Central Asia, reaching the mountain chains of the Central Asian republics and the Baikal Lake in Siberia.

In Europe it estivates practically only in the Scandinavian peninsula and in Russia, areas that concentrate the whole continental population. 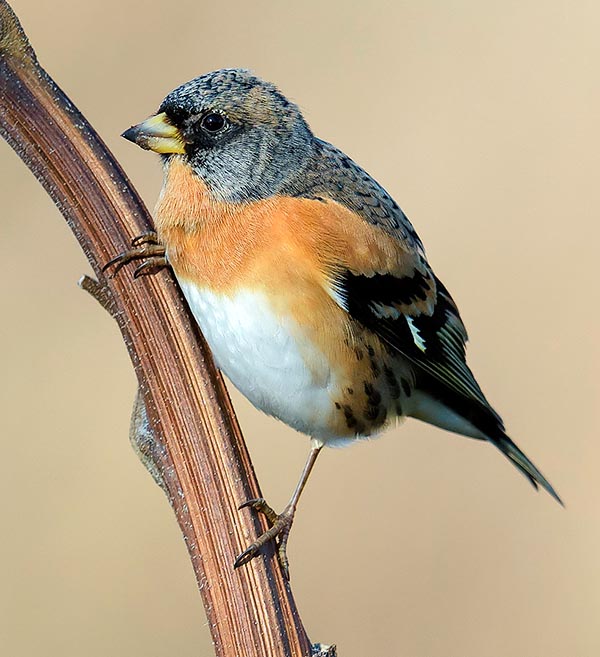 Such a vastity of territory united with a so large availability of specifc range suitable to its exigencies, is evidenced by populations of very consistent proportions and such to render the species safe from all danger although it has been found a significant decrease during the last decades in some parts of their territory.

However, the only European estimate quantifies the continental population in about 20 millions of couples.

It is a typical migratory bird, having a range that during the boreal winter is invivible to almost all avian species. The migration is important and is such to leave totally the territories of nidification during the winter, for new quarters placed practically still in the same continents but at lower latitudes. It is not therefore a migrant properly in long range and does not need to reach tropical or equatorial eareas for wintering.

Our populations move in the central-southern Europe, without reaching, if not erratically, the African coasts of the Mediterranean and the Middle East whilst in Asia they concentrate in Japan and in China thus avoiding almost totally the Indian subcontinent, perhaps too hot and humid for their necessities.

The brambling lives the summer period typically in conifer forests of the boreal hemisphere, dense and leafy, with lichens and mosses, with tendentially cold climates or at least cool and subject to summers by sure not at Mediterranean level. It loves also the birchwoods especially when close to extensions of conifers. Conversely, the winter quarters are rather different and suitable uniquely to the searching of food and to the survival during the bad season. Cultivated fields now resting, stubbles and fallow lands, scrubs and meadows abandoned for the winter. It loves very much also the beech woods, the alder thickets and any other essence that produces small cones or any other fruit with seeds. 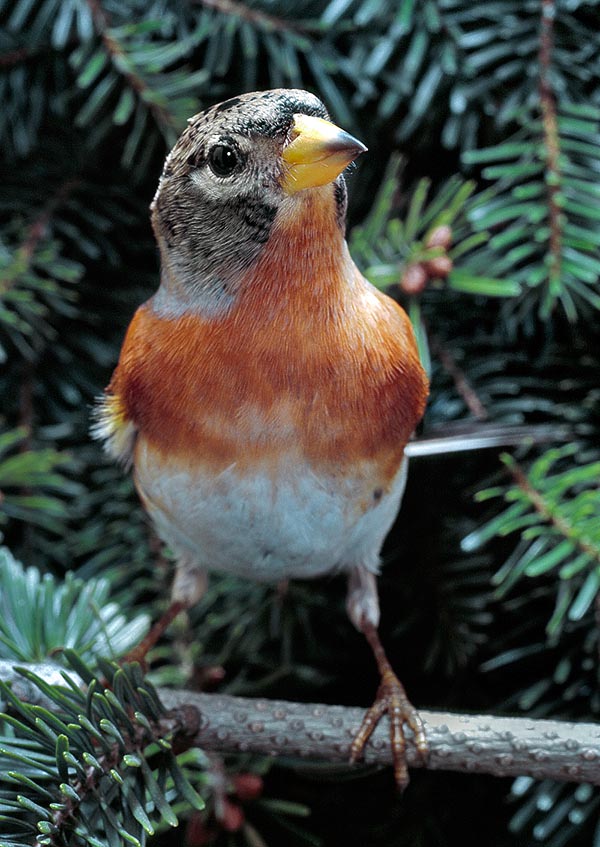 Also the behaviors are different in the two periods. It is a territorial bird and rather solitary during the nidification whilst becomes incredibly social during the migrations, behavior accomplished merging in flocks at times immense.

The migration occurs typically in waves and in particular days, periods where the migratory flow takes place with the passage of flocks not too consistent but in a continuous and ceaseless way. In this way it happens to observe in the evening roosting with several thousands of specimens mixed with other fringillids and buntings, collected along the way during the migration.

The brambling shows a remarkable sexual dimorphism. The male has a nuptial livery with very bright and lively colours whilst the female is quite similar to the congener Chaffinch (Fringilla coelebs), has a more modest plumage and less evident but grossly resembling to the partner’s one. As if it were a little male poorly coloured or just acquiring the adult plumage.

The male has the head totally black that covers also the nape and part of the back, with pearly black, conical and robust bill. The chest evidences an ample belt of bright orange colour that wraps part of the back and the sides and contrasts with the remiges that are on the contrary of a black raven colour. The scapulars are in their turn crossed by a narrow orange white band that is well visible when in flight.

The abdomen is white and the tail black with the outer rectrices are missing of the white barb typical of our finch.

What characterizes and distinguishes by far the brambling from our finch is on the contrary the very white rump of the first that stands out in every movement.

In winter the tinges shade considerably allowing to glimpse a white dusting on the head, the bill becomes yellow and with the orange on the chest attenuated. The female, as previously said, has by far more modest colours and does not evidence neither the black of the head nor the strong orange colour present in the livery of the male. The young and the subadults resemble an even more faded female. It is 16 cm long with a weight varying from 20 to 30 g and a wingspan of about 25 cm. 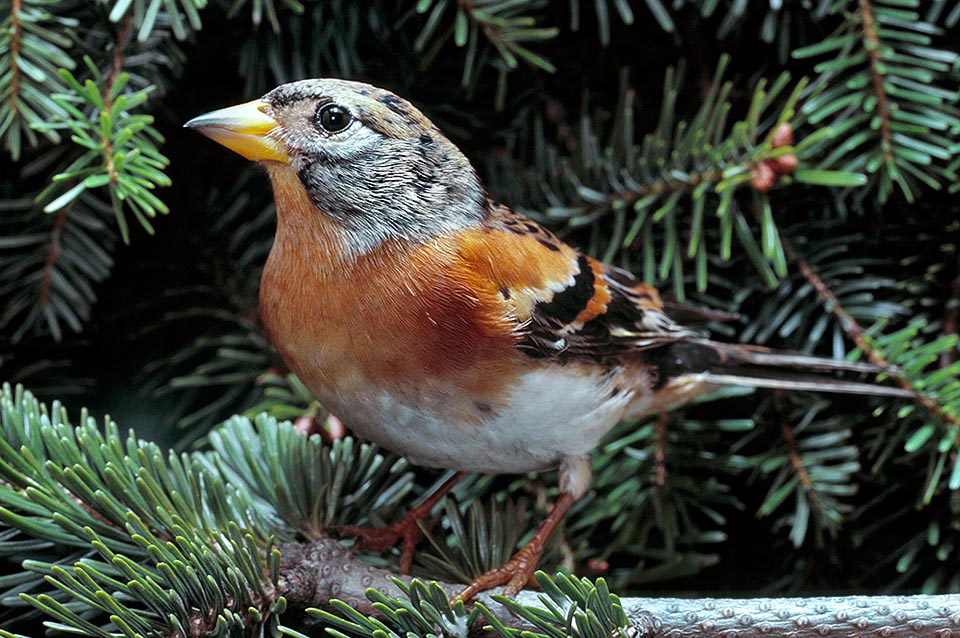 Like all fringillids, it eats insects during the reproductive period whilst during the winter it eats almost exclusively berries, seeds and grains © Giuseppe Mazza

The couple is monogamous for the only season of nidification even if the family group formed during the productive season, remains united surely during the winter flocks. The nest is a typical fringillid cup, sufficiently deep and well sized built with mosses and lichens and covered inside with soft and minute material. The structure is located usually on a bifurcation of a branch but also leaning directly in the conifer needles at a height of some metres. It’s the female who builds the nest while the male controls and defends the territory from eventual aggressors or competitors. Usually 4-6 eggs are laid, rarely up to 9, of cream bluish colour finely dotted of reddish and the brood lasts averagely a pair of weeks. 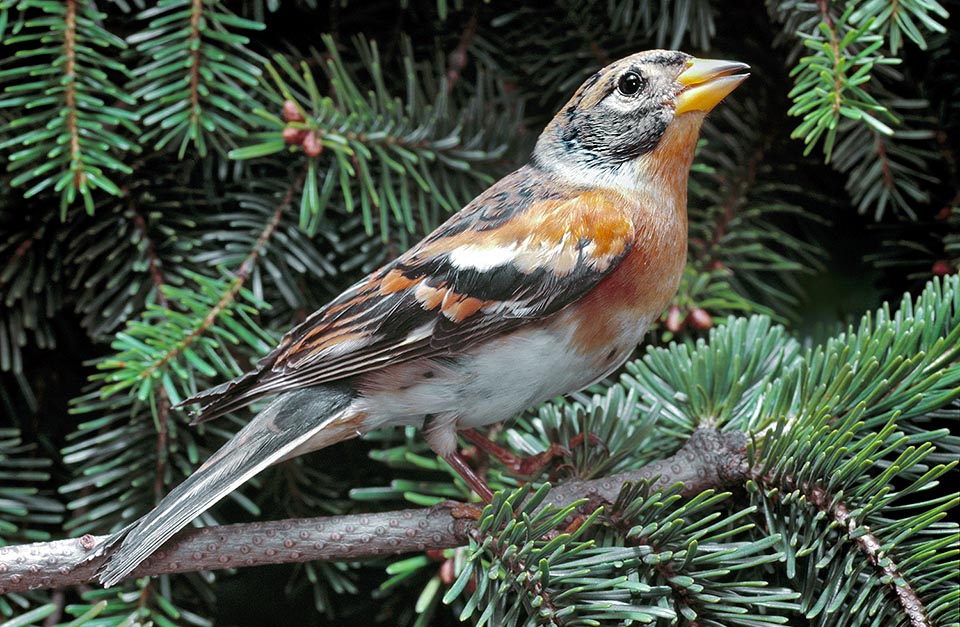 Usually it reproduces only once per year and in winter migrates also at long range but without reaching the tropics. Territorial and quite solitary during the nidification, the brambling becomes incredibly social for migrating, with wavy flocks that follow each other in almost continuous and unceasing way © Giuseppe Mazza

The chicks come to life blind and featherless and keep in the nest, assisted by both parents, for about 2 more weeks before flying but are followed by the parents also for a further period. Usually only one brood but a second one is possible depending on the years. The brambling, like all fringillids, nourishes of insects, caterpillars and larvae in the reproductive period not disdaining of course vegetal foods, but modifies totally the diet during the winter when it eats almost exclusively berries, seeds and grains. In Italy the nidification is rare and sporadic as it is on other mountain chains of Central Europe but always at altitudes such to reproduce the climatic conditions propre of the usualy territories located north. The territorial song is fairly melodious for a fringillid whilst the contact call is a sharp “gnec gnec” repeated in succession. The species is not considered as endangered.