The plant is native to Canada (British Columbia and Saskatchewan) and to USA (Colorado, Idaho, Minnesota, Montana, North Dakota, Oregon, Utah and Washington), where it mainly grows on the semi-arid slopes of the Rocky Mountains and in the prairies.

The genus is honoured to the magistrate and member of the French Academy M. Gaillard de Charentonneau, passionate and patron of the XVIII century botany; the name of the species comes from the Latin “arista” = ear (of the spike) with reference to the pappus provided with long bristles similar to ears.

The Gaillardia aristata Pursh (1814) is a perennial, evergreen, cespitose, herbaceous plant, with single or little ramified stem, striated, tomentose and 20-70 cm tall. It has alternate, greyish green leaves covered by a thick down with prominent white central venation; the basal ones, on a 5-15 cm long petiole, may be oblong or spatulate, 5-15 cm long and 0,5-3 cm broad, with entire margin, irregularly dentate or lobed; those along the stem are sessile (without petiole), usually lanceolate or oblong with entire or dentate margin, rarely pinnatifid. The solitary terminal inflorescence, of 8-10 cm of diameter on a 20-40 cm long peduncle, is the typical flower head of the Asteraceae formed by a crowd of sessile flowers spirally inserted on a roundish base, the receptacle, surrounded by an involucre made of imbricate bracts, often turned backward, linear lanceolate and hirsute, about 1 cm long. 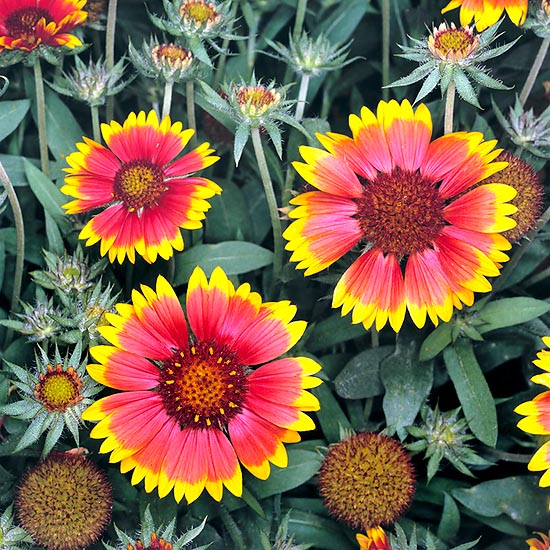 Easy cultivation in full sun and in well drained soils. Resists to -30°C and blooms for 2 months © Giuseppe Mazza

The 10 to 18 flowers of the outer ring, called ray florets, are 2-3,5 cm long, of yellow colour, at times purple or reddish at the base, with corolla formed by five petals fused together to form a wedge with trilobed extremity.

The ray florets are sterile and have the function to attract the pollinator attention, like the petals of a single flower. Inside the ring are the fertile flowers, called disc florets, in number of 60 to 120, with 5-7 mm long tubular corolla and with a diameter of 0,5-1,5 mm, of bright yellow colour with purple red margin, with five lobes, 1-2 mm tall and hairy.

The fruits, containing only one seed and called achenes in the Asteraceae, are hairy, about 4 mm long, and surmounted by the pappus, the modified calyx of the flower, formed by a crown of 5 to 8 membranous scales, 6 mm long and white, with narrowed and pointed apices resembling to ears; the pappus has the function of promoting the dispersion of the fruits.

The disc florets are bisexual, but have the phenomenon of the protandry: the male organs, the anthers, ripe before the female ones, the stigma, hindering the self-pollination and promoting the cross-fertilization. This behaviour is common to almost all the Asteraceae. After the fall of the ray florets, the receptacle goes on in growing to assume, together with the disc florets, a globular look.

It reproduces by seed or by division; usually it self disseminates quite easily.

Sturdy plant and of easy cultivation, prefers an exposition to the full sun and well drained grounds, in fact, when in permanently wet soils will wither and quickly die; it is suitable for edges, colour spots, desert and rocky gardens.

It has a long blooming season, about two months, high resistance to high as well as low temperatures, it seems it may resist even to -30° C, and a good resistance to the dryness and the saltiness.

Since time, however, it has been replaced in cultivation by its hybrids with the Gaillardia pulchella, called Gaillardia × grandiflora (see photo), with bigger flowers and longer lasting both in the plants as well as when cut, different gradations of colour and longer blooming time, from June to October.

It adapts also to the cultivation in pot, keeping in mind its necessities about the exposition and the substratum. The contact with the leaves and the stem may cause allergic reactions to particularly sensitive individuals. All the parts of the plant have had, in the past, several utilizations in the popular medicine.