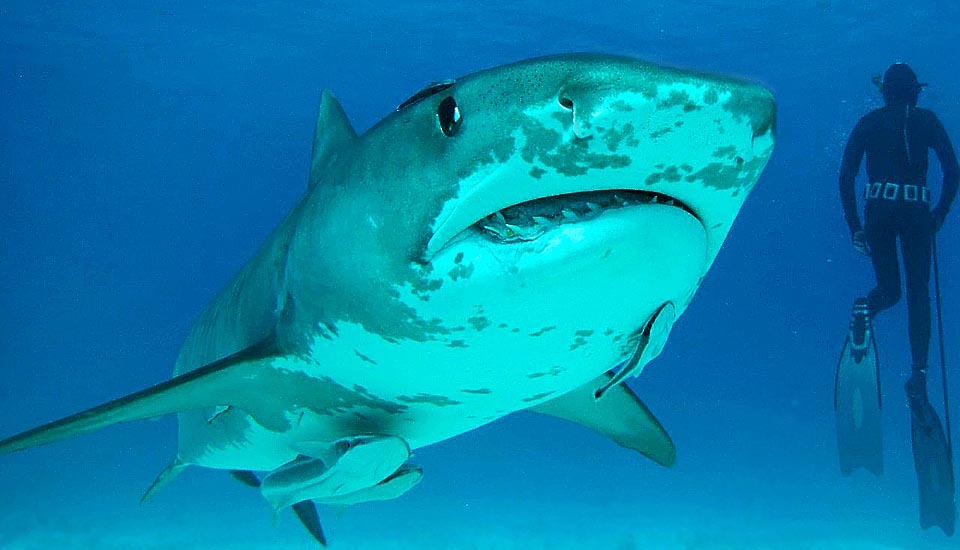 Even 7 m long and of 800 kg of weight, the Tiger shark (Galeocerdo cuivier) has a very vast diffusion in all world’s temperate and tropical coastal of the whole world. Surely oversized head, squared, cuneiform, for better rending water. The mouth is an enormous abyss with which is better having no relation © Sebastiano Guido

The name of the genus comes from the Geek words “galeos” (shark) and “kerdò” (fox), whilst that of the species is a tribute to Georges Cuvier, considered as the father of the comparative anatomy. The Italian name of “squalo tigre” that we find also in other languages, refers to the dark stripes that characterize the dimensions of this species.

It has a very vast diffusion that includes the temperate and tropical areas of the while world.

It is present in the coastal waters, including the salty waters, the lagoons and the atolls in a depth band varying from the surface to little more than hundred and fifty metres. It is totally missing in the cold waters. 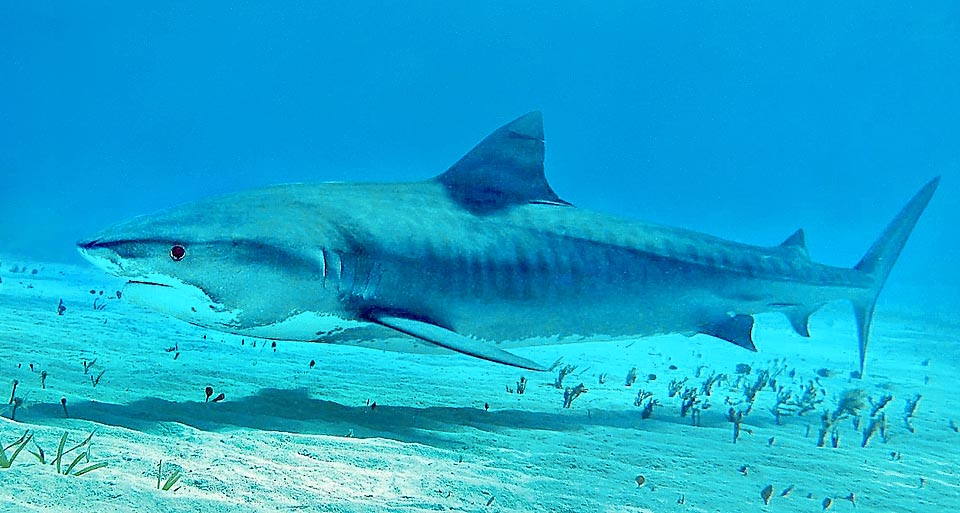 Present also in salty habitats, lagoons and atolls, up to 150 m of depth, is totally absent in cold waters © Sebastiano Guido

The average size of the adult specimens varies between the four and five metres, even if they have fished specimens exceeding the seven metres with a documented maximum weight of 807 kg.

The first thing we note, when we meet it under water, is the great size of the head, square and wedge-shaped for better rending the water, oversized in respect to a robust but fairly slender body, just ended the thorax. The eye is plumbeous and disturbing with a very slight margin that can be observed only when rotating.

The mouth is a huge abyss with which is better to avoid any relation, with a corolla of teeth, facing backwards and with serrated margins, that may exceed the four centimetres of protrusion. It is rich, as in all carnivorous shark, of several rows of teeth, the first one erect, ready to the offense, whilst the remainder of the teeth placed behind the first, has every tooth parallel to the palate and ready to raise in substitution of those of the first row lost hunting or for normal alternation.

The body, stocky front and slender behind, has a dark back, dotted with spots and blackish stripes very evident in the youngest specimens, that while growing gradually fade. Sparse spots concolorous to the back are present in disorder on the white abdomen. Two long pectoral fins enlarged like a planning wing support the body that otherwise the pushing of the very long upper lobe of the tail would tend to sink. 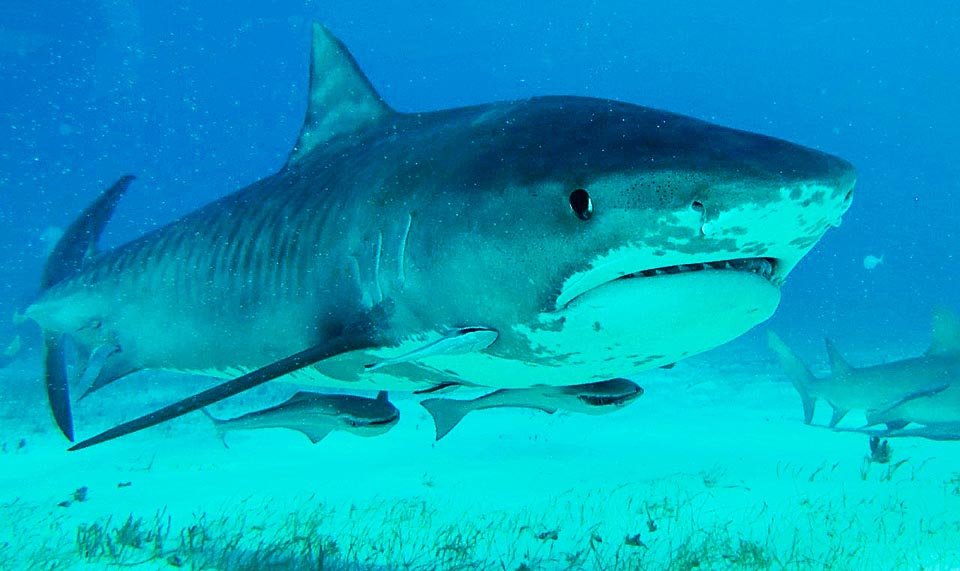 Here with two remoras (Echeneis naucrates). The dark back, with the typical blackish vertical stripes, more marked in youngs, that have contributed to the name of tiger © Sebastiano Guido

It is considered as a scavenger of the seas because in its stomach they have found everything, from mollusks, crustaceans and fishes of various species to pieces of crocodiles and whales, finding also, unluckily, human remains. In addition to everything moving in the sea, often are swallowed for curiosity, also disparate objects, such as fuel drums or various wastes that the human carelessness throws or lets finish in the water.

With the divers usually it is very curious and indifferent but at times it may attack and, unlikely the white shark that limits to the first bite waiting for the prey to bleed to death before dismembering it, the tiger shark continues to attack with consequences almost always fatal.

As is known, several remoras go along with the sharks, the big turtles and at times even on the back of the divers. In our case they may slip into the mouth of the tiger shark and then get out. Probably the remora is not only an opportunist that utilizes the sharks and big animals as transportation means but is tolerated and appreciated by the predators because it cleans them up, acting as toothpaste and as living toothbrush. 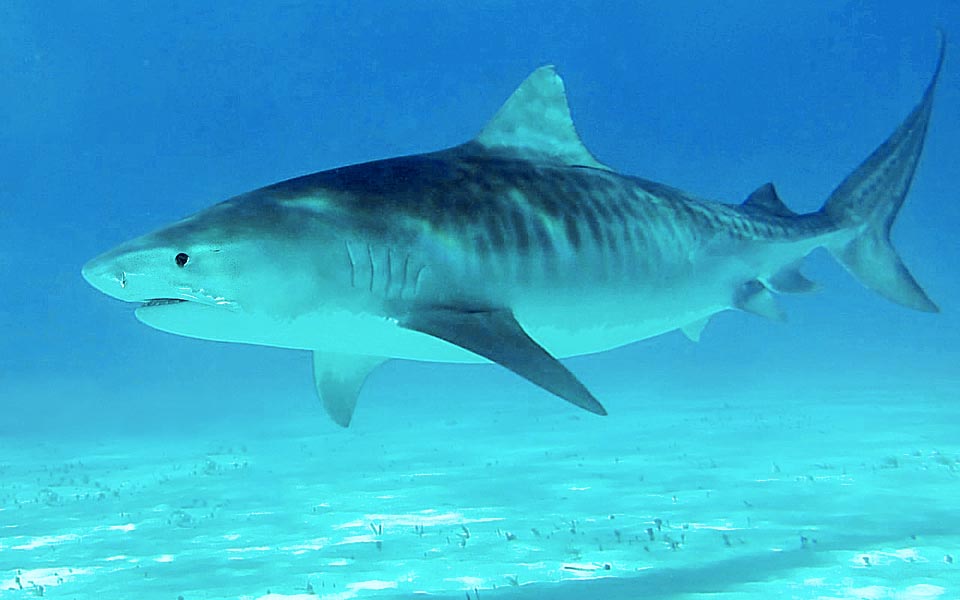 Actually, unlike the noble feline, it is a real sweeper of the seas. In its stomach they have found everything: mollusks, crustaceans, fish of all kinds, pieces of crocodile and whales, drums of fuel, various wastes and unluckily also human remains. The resilience is low and the vulnerability index is presently alarming © Sebastiano Guido

After the mating and a gestation varying from thirteen to sixteen months, the female of the tiger shark, ovoviviparous, carries with itself a variable number of eggs that usually does not exceed the seventy. At birth the newborn can reach the length of one metre, even if usually the standard size slightly exceeds the sixty centimetres.

The population is in abrupt decrease due to the barbaric practice of the shark finning, and due to the utilization of the meat (of fairly good commercial value), of the leather and of the oil extracted from the enormous liver.

The resilience of the species is low and the minimum time for the redoubling the population, under optimum conditions is of 4 years and a half but usually may reach the 14 years. As expected, the vulnerability index is high, reaching quota 64 (2017) on a scale of 100.