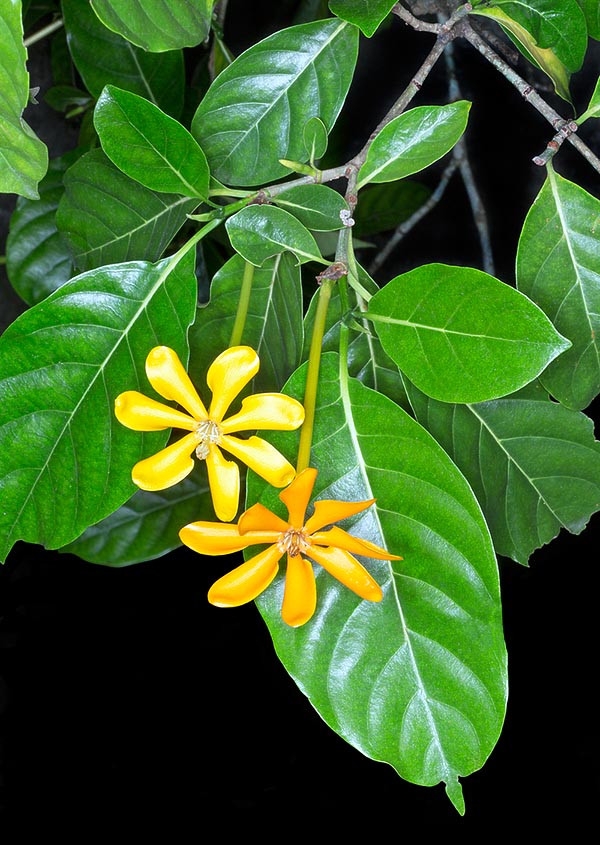 The species is native to Borneo, Cambodia, Nicobar Islands, Peninsular Malaysia, Singapore, Sumatra, Thailand and Vietnam, where it grows in the pluvial forests in plain as well as in the hilly zones, usually along the water streams in sandy soils.

The genus is honoured to the Scottish physician and naturalist Alexander Garden (1730-1791), who spent good part of his life in South Carolina studying local flora and fauna; the name of the species is the combination of the Latin substantive “tubus” = tube and the verb “fero” = to carry, with reference to the long corolline tube.

The Gardenia tubifera Wall. ex Roxb. (1824) is a shrub or an unarmed evergreen tree, 3-15 m tall, with smooth bark of brown grey colour and vegetative apices covered by resin. The leaves, on an about 0,3-1 cm long petiole, are opposite, simple, coriaceous, oblanceolate with thinned apex and pinnate nervations prominent below, 7-15 cm long and 3,5-5 cm broad, glabrous, of glossy intense green colour. The flowers, on a 0,3 cm long peduncle, are solitary, intensely perfumed, with tubular calyx about 0,8 cm long, hypocrateriform corolla (with spread lobes perpendicular to a long thin tube), of the diameter of about 7 cm, usually with 8 lobes, obovate to oblanceolate, helical, and 7-11 cm long corolline tube; the flowers, lasting 6-7 days, at the opening are white, the second day turn yellow and from the third day intense orange.

The fruit is a dehiscent globose capsule, of about 4 cm of diameter, of pale green colour, with the trace of the tubular calyx persisting at the apex of the fruit, containing several seeds immersed in an orange pulp. It reproduces by seeds, previously kept in water for one day, in draining loam kept humid at the temperature of 22-24 °C, and by cutting.

It is one of the most spectacular and perfumed species of the genus, but fairly rare in cultivation, with copious flowerings repeating several times during the year, cultivable in the humid tropical and subtropical climate zones, preferably in full sun the morning and in partial shade in the afternoon hours, of great ornamental effect as single specimen or as edging, as it supports well the pruning.

It requires soils rich of organic substance, well drained, acidic to neutral, with regular watering during possible dry periods and fertilizations with balanced products with microelements. 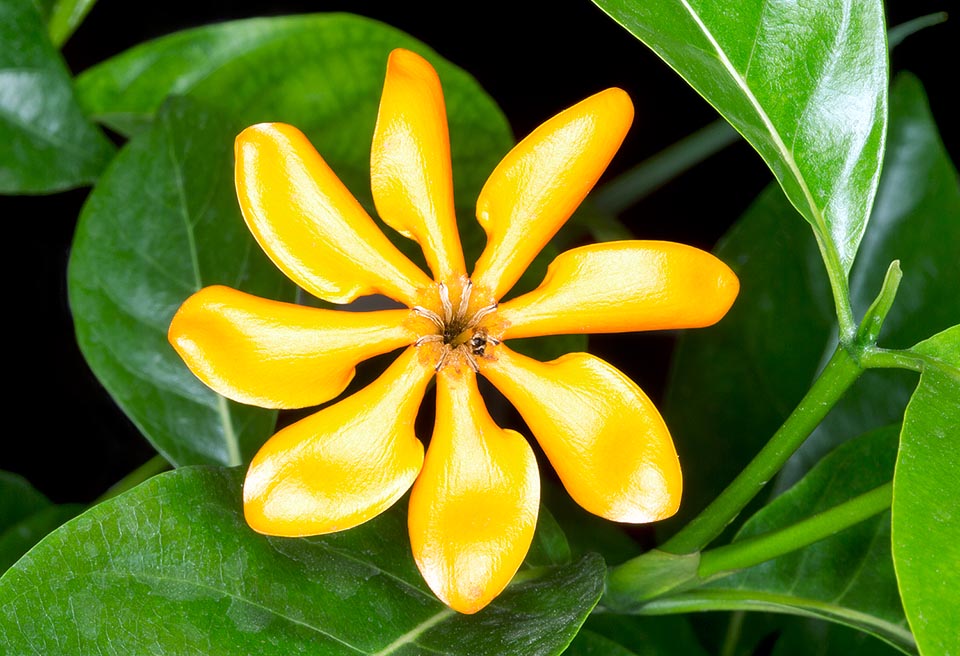 Very scented flowers of about 7 cm, changing from white to orange, with 8 helixlike lobes. The unusually long corolline tube has given name to the species © G. Mazza

It adapts to the cultivation in pot, utilizing an organic substratum with addition of siliceous sand or perlite for a 30% to improve the draining, for the decoration of patios and terraces or greenhouses and winter gardens where the climate does not allow its permanence in open air during the winter months, with lowest temperatures over the 15 °C; the watering must be regular in summer, more spaced in winter, but without allowing the loam to dry up, and high ambient humidity.

The white wood, of fine texture and of medium hardness, is used in the constructions.