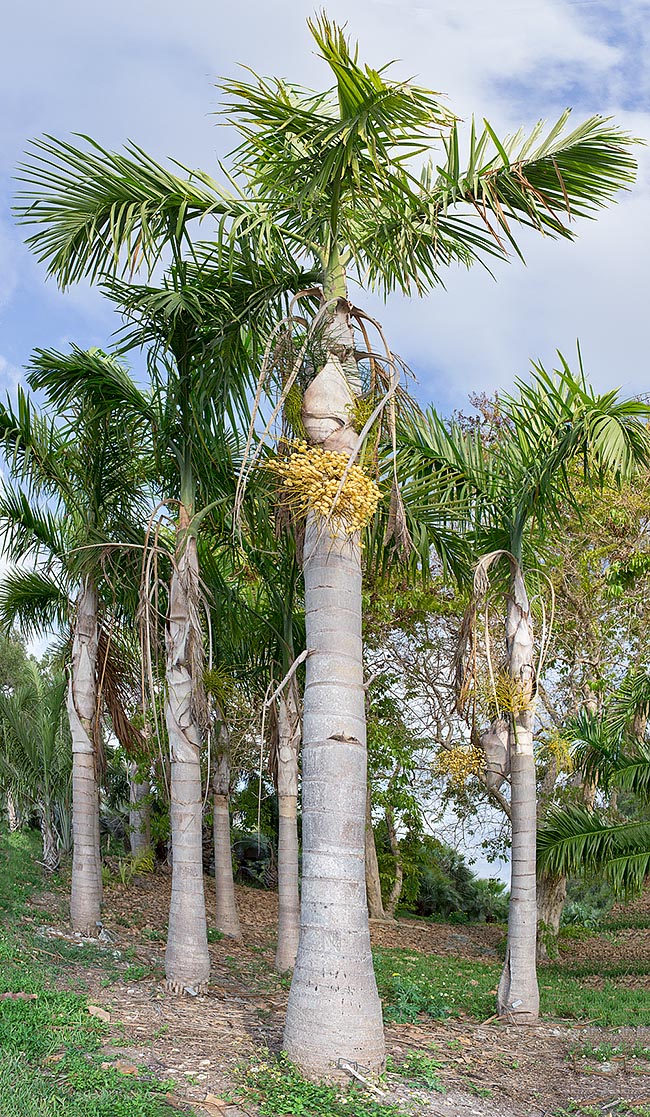 Even 12 m tall with stems enlarged at the base reaching the 30 cm, Gaussia gomez-pompae is a Mexican species under risk of extinction in nature reported in the “red list” of the most vulnerable species © Giuseppe Mazza

The species is native to Mexico (Chiapas, Oaxaca, Tabasco and Vera Cruz) where it grows in the humid forests, on rocky-calcareous impervious hilly slopes.

The genus is dedicated to the German mathematician Johann Friedrich Gauss (1777-1855), the species to the Mexican ecologist and ethnobotanist Arturo Gómez-Pompa (1934).

The Gaussia gomez-pompae (H.J.Quero) H.J.Quero (1986) is a solitary monoecious species, unarmed, with erect or sloping stem, up to more than 14 m tall and of 30 cm of diameter close to the base, smooth, grey, marked by the annular traces of the junction of the fallen leaves, spaced up to 10 cm in the median part, and provided at the base of robust adventitious roots.

The crown is usually formed by 8-12 leaves, on short petiole, pinnate, 2-3 m long, with up to 100 pairs of linear-lanceolate leaflets with acuminate apex, in the median part 70-75 cm long and 4-4,6 cm broad, close to each other and regularly arranged on different stages, giving a slightly feathery appearance, of slightly glossy intense green colour with prominent yellowish central rib; the dry leaves remain for a certain time on the plant before falling.

Inflorescences initially between the leaves, later on under the leaves when ripe, about 1 m long, with ramifications of second order, bearing on each rachilla spaced groups (acervuli) spirally arranged of 3, rarely 2 or 4, tiny unisexual flowers of cream white colour, almost lined up and strictly juxtaposed, with a female flower at the base followed by the male ones; in the terminal part of the rachillae are usually present only solitary male flowers.

The male flowers open and fall sequentially starting from the extreme, when all those of the group have fallen the female flower opens.

The fruits are globose drupes of 1,4-1,6 cm of diameter, of yellowish colour, then orange red when ripe, containing only one subglobose seed of 1,3-1,5 cm of diameter.

Relatively slow growing species, rare in nature and almost unknown in cultivation, particularly characteristic at the juvenile status when forming an almost spherical stem during the first years and then bottle-shaped, before developping an almost cylindrical stem slightly enlarged at the base. Can be utilized isolated or in group in the tropical and subtropical zones, and marginally in the mildest warm temperate climates, were temperatures around the 0 °C are of very short duration. 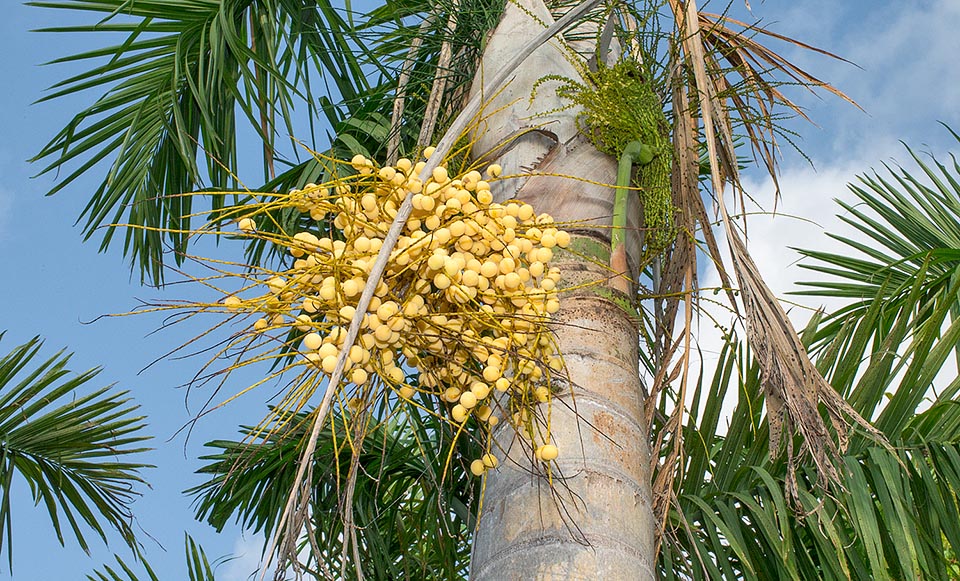 Almost unknown in nature, also due to its slow growth, has fruits of 1,4-1,6 cm of diameter, yellowish, then orange red when ripe © Giuseppe Mazza

It requires full sun or a slight shade when young and perfectly draining soils, alkaline, where, well rooted, can stand short periods of drought, but takes advantage from regular waterings in the climates with long periods of dry heat.

Owing to the progressive reduction of its habitat, due to the increasing anthropization and expansion of the agriculture, the species has been inserted in the red list of the IUCN (International Union for the Conservation of Nature as “vulnerable” (species under risk of extinction in nature).