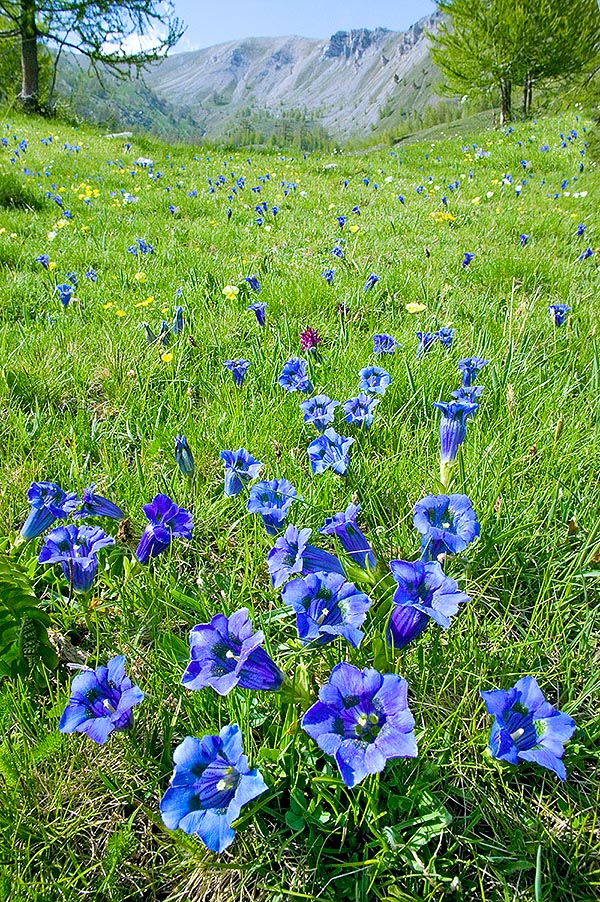 The Gentiana acaulis L. (1753), is a perennial, stoloniferous, 5 to 15 cm tall plant, present on the mountains of central-southern Europe.

The term “Gentiana” probably comes from “Gentius”, last Illyrian king, defeated by the Romans in 168 A.C.

The specific epithet “acaulis” refers to the shortness of the stem.

The stem is simple, short.

The basal leaves, without peduncle, are arranged in rosette at the base of the floriferous stem. They are 2,5 to 8 cm long and 1,5 to 4 cm broad, elliptic to obovate, with apex usually obtuse, rarely more or less sharp, with 1-3 main veins.

Along the short stem are present few couples of cauline leaves, of reduced look and sharper apex.

The flowers are solitary, terminal in respect to the stem, with campanulate corolla, divided in 5 lobes, 3-7 cm broad, of intense blue colour, internally with blackish and greenish spots at the base of the lobes. The stamina are 5, inserted in the tube of the corolla, the stigmata have fringed margins.

The calyx has 5 spread apart teeth, more or less sharp, about 2,5 times longer than broader, restricted at the base, long less than half of the calyceal tube, spaced by inlets provided with a membrane.

The fruits is an ellipsoidal capsule and contains brown seeds.

The blooming takes place from May to August. It grows on rock slopes, meadows and pastures, on soils preferably acidic, not calcareous, from 1400 to 2900 m of altitude. It is present on the reliefs of Central-Southern Europe (Cantabrian Mountains, Pyrenees, Alps, Apennines, Carpathian Mountains, Balkan Peninsula).

A similar species is the Gentiana clusii Perrier & Songeon, that differs due to the basal leaves, elliptic-lanceolate to ovate with acute margin. The teeth of the calyx are of triangular shape, widened at the base, about as long as the calyceal tube. It prefers stony places, meadows and pastures on calcareous substrata. 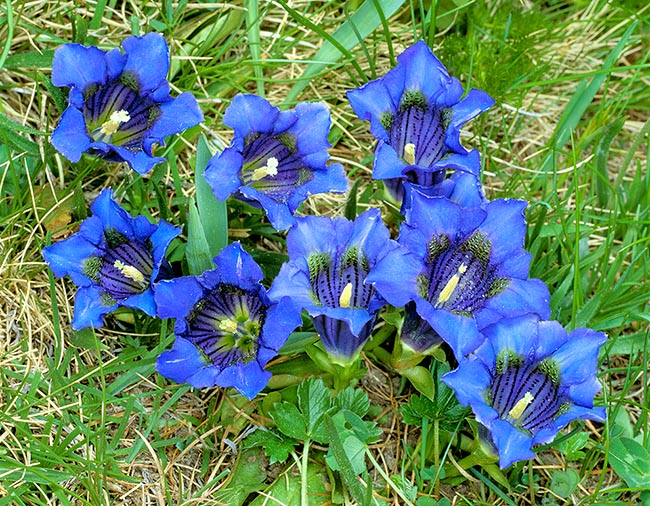 It grows on rocky slopes, meadows and pastures of Centre-South Europe in acidic soils between 1400 and 2900 m © Giuseppe Mazza

The cultivation of the gentians in the gardens has had a remarkable increment during the last years, thanks to the beauty and the variety of species. It is not however a simple task as are to be kept in mind the different ecological and climatic exigencies. Luckily, it is always easier to find nurserymen specialized in the production and sale of alpine plants suitable for the cultivation in the rocky gardens, in order to avert the collection in nature of plants or of parts of them, being usually protected species.

The Gentiana acaulis multiplies by seed, by cutting or by clumps division.

Like its congeners, it needs a deep and permeable soil, possibly enriched with peat or humus in order to maintain a good level of humidity. Are to be preferred the gently sloping positions and not in full sun.

The gentians are suitable for the cultivation in the rocky gardens, provided that in the alpinum is arranged a good system of draining and that are chosen the suitable exposition and type of soil. The cultivation in pot is another possibility as it allows to protect the plant against the adversities in a more efficient way. Also in this case is very important the choice of the loam, the most possible similar to the natural substratum, condition that it may be obtained by adding a part of humus or of peat.

Many species of Gentiana, in particular the Gentiana lutea, are utilized in pharmacopoeia, in herbology and in the liquor industry. 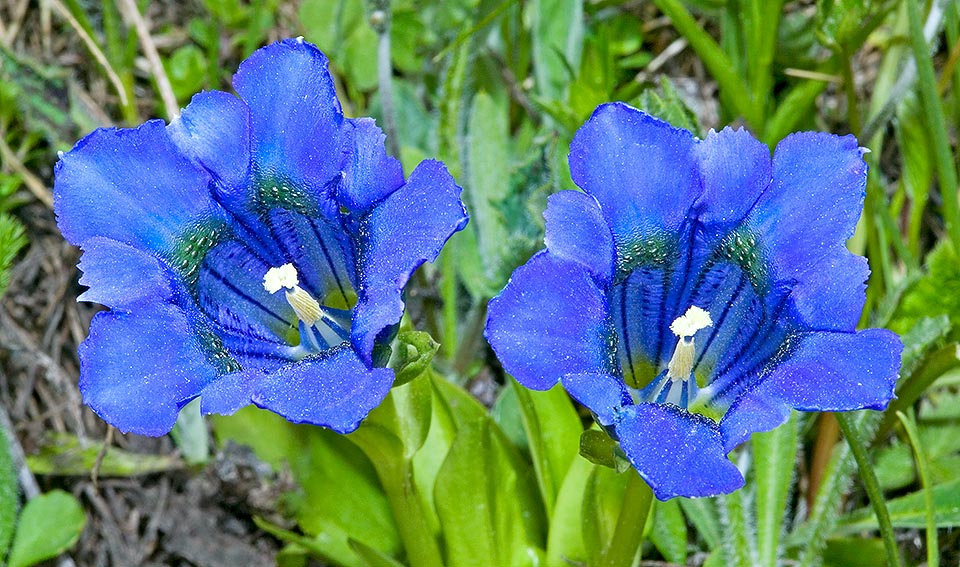 The solitary, terminal flowers, with campanulate corolla divided in 5 3-7 cm broad lobes, of intense blue, internally blackish and greenish spots at the lobes base © G. Mazza