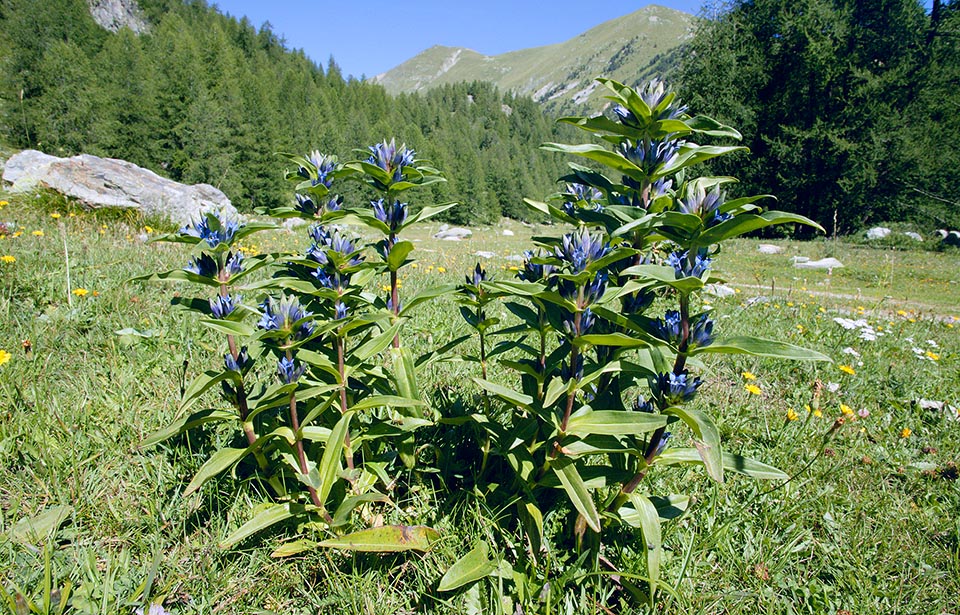 The Gentiana cruciata L. (1753) is a perennial plant, with erect stems, 15 to 50 cm tall. Is present on European mountains, excepting the extreme northern and southern regions, on the Caucasus and in north-western Asia.

The term “Gentiana” probably comes from “Gentius”, the last Illyrian king, defeated by the Romans in 168 BC. The specific epithet “cruciata” comes from the Latin, means “cross-shaped” and refers to the disposition of the leaves on the stem. 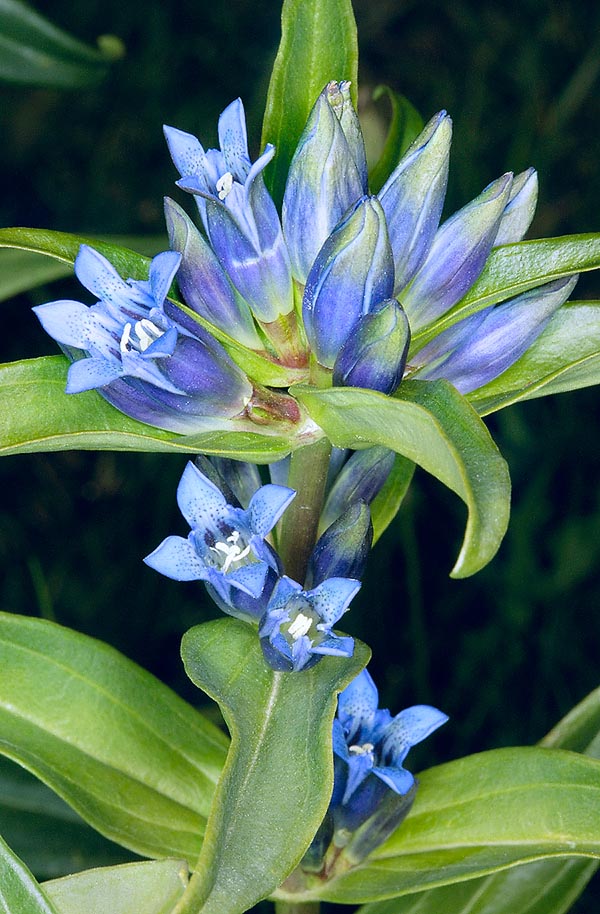 Small blue corollas, axillar in bundles, with green shades on the buds. 4 lobes, rarely 5 as in the photo © Giuseppe Mazza

The stem is erect, simple, angular, at times reddened, with monopodial ramification, that is, with only one main axis. The basal leaves, lanceolate, form a sterile rosette and are often accompanied by the dry leaves of the previous year. The dimensions are of 3-8 cm x 1-3 cm. The leaves of the stem are similar, only slightly bigger, and have 3-5 veins.

They are firm, with slightly waved margin, sessile, opposite and wrap the stem with a sheath for a short stretch. The couples of leaves are arranged on the stem at a right angle with respect to each other, crossed. This disposition of the leaves stands at the origin of the meaning of the specific epithet.

The flowers are fairly small, grouped in bundles at the axil of the leaves. The calyx is a 6-8 mm membranous tube, slightly engraved on one side. It has teeth of irregular triangular shape, deep about as much as the calycine tube.

The corolla, of blue colour, with greenish shades especially in the bud, is tubulous and enlarged in the upper part. It measures 2-3 cm and has 4 lobes (rarely 5), of ovate shape. The stamens are inserted into the tube of the corolla.

The fruit is an ellipsoidal capsule and contains dark ovoidal seeds.

Gentiana, The blooming occurs between June and August. Like for the other species of the genus Gentiana, the pollination is almost always done by hymenopterans and lepidopterans (bees and butterlies).

The preferred locations are arid meadows, pastures, clearings and shrubberies. It loves the calcareous soil. On the Alps it grows from 800 up to 2600 m of altitude. Like other species of the genus Gentiana it is possible to increase its diffusion avoiding the harvesting in nature and protecting the environments where it grows. In the gardens it may be cultivated in the open ground to form enjoyable flowerbeds. It is a robust and undemanding plant, however the soil is to be maintained humid and aerated, possibly with the addition of peat or of humus.