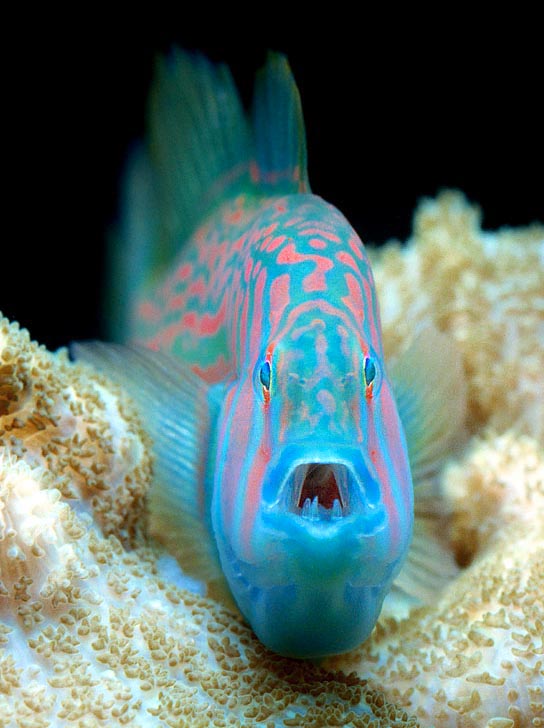 The Broad-barred goby (Gobiodon histrio Valenciennes, 1841) belongs to the class of Actinopterygii, the ray-finned fishes, to the order of Perciformes and to the great family of Gobiidae, which counts about 2000 species.

The name of the genus comes from “gobius”, the name the Romans were giving to the gobies, and from “odus” = tooth in Greek, due to the teeth quite showy in respect to the size.

The name of the species “histrio” = histrion, actor, dancer in Latin, refers to the way of moving, skipping along and to its spectacular livery.

It is at home in the tropical waters of the Indo-Pacific. It is found in the Red Sea and also, indicatively, in the Andaman Islands, in Thailand, Australia, Indonesia, New Guinea, Philippines, and southern Japan. Eastward, it reaches Samoa, in the southern hemisphere the Great Barrier Reef and Tonga.

It lives in shallow waters, in the madreporic formations up to 15 m of depth. It loves the species of the genus Acropora, and in particular the branches of the Acropora nasuta where it gets shelter, food and a place for spawning.

The relationship with this species is very strict, almost symbiotic. The madrepore, in fact, attacked by poisonous seaweed, the Chlorodesmis fastigiata, which kills it, quickly, choking it.

Accurate tests have been done.

When it gets in touch with the seaweed killer, the Acropora sends a precise chemical alarm message to two friendly fishes: the Gobiodon histrio and the Paragobiodon echinocephalus.

They come quickly, but whilst the last one limits to take off the seaweed, maybe associated with one of the preys, the broad-barred goby eats it happily, poisoning, day after day, its tissues, already naturally endowed of a strong paralysing toxin. 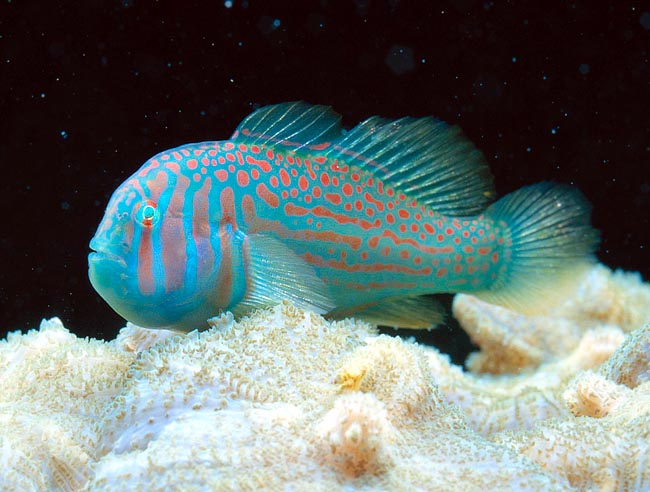 This is well known to the predators that have experienced it and seen that the showy livery cannot be forgotten, even if some individual dies by accident, the species enjoys of a unanimous respect.

The mouth exhibits some conical teeth, imposing for such a small species and the background colour is green to blue depending on the circumstances.

Characteristic are the red drawings, at times orange, with vertical bands on the sides of the head and the horizontal lines breaking to end in dashes and dots towards the back.

Mainly carnivorous, the broad-barred goby does not disdain, as we have seen, also the seaweeds infesting its house. 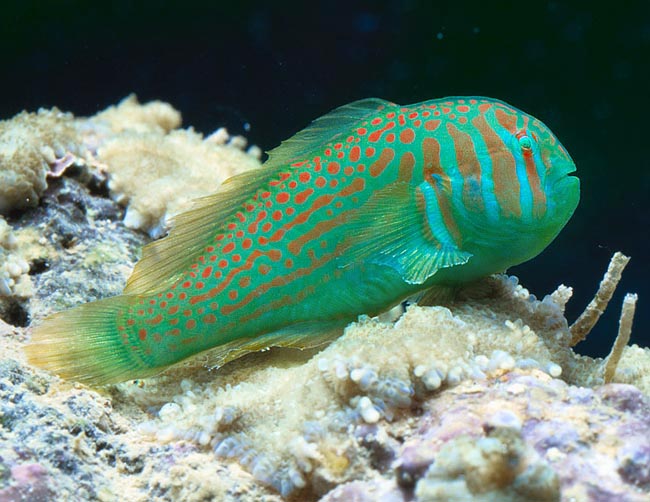 Imbued as it is of poison, when feeling menaced, the Gobiodon histrio releases in the water a toxin inhibiting the locomotion of the predators, which, surprised, may even get, baffled, upside down.

The broad-barred goby is a hermaphrodite species and can change of sex in the two directions.

It is sufficient that two juveniles settle on an Acropora nasuta and we can be sure that in short time one will be male and the other female for the joy of spawning and generating progeny.

With these premises, it is one of the species less endangered in the world of fishes, even if the fragile equilibrium of the reefs, tied to the global warming, might perhaps create some problems.

Presently, the populations are capable to double in less than 15 months and this small jewel of the sea has a vulnerability index of 10 on a scale of 100.