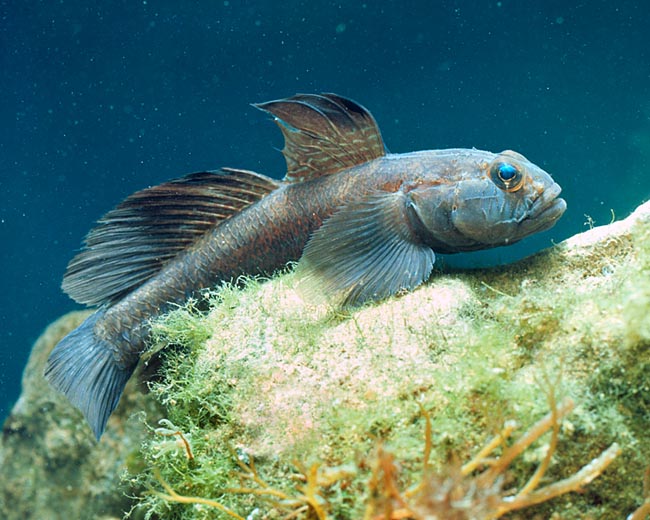 The even 20 cm long Globus niger is at home in the Mediterranean, Black Sea and East Atlantic © Giuseppe Mazza

The Black goby (Gobius niger Linnaeus, 1758) belongs to the class of Actinopterygii, the ray-finned fishes, to the order of Perciformes and to the great family of Gobiidae, perhaps the richest of the marine world, which has more than 200 genera and almost 2000 species, manly present in the tropical and temperate seas, but also in the fresh and brackish waters of the whole world. Some of them are called catadromous (literally, that they run downwards) because, as often happens in the tropical islands, even if they spend most of their life in the rivers some of these fishes go to the sea for breeding.

The name of the genus “gobius” is the name the Latins were giving to this fish.

The name of the species “niger” = black in Latin, emphasizes its dark colour.

The black goby is at home in the Mediterranean and in the Black Sea, but also on the Atlantic coasts from Mauritania to Norway, Canary Islands included, but the Açores and Madeira. Once they were talking of two subspecies: the Gobius niger jozo for the Mediterranean and the adjacent zones and the Gobius niger niger, darker and more prone to the brackish waters for the northern Atlantic, but seen that in both zones the variability of the livery is quite common, they have reached the conclusion that the small differences are only an adaptation to the habitat and the distinction has been confined into the synonyms. 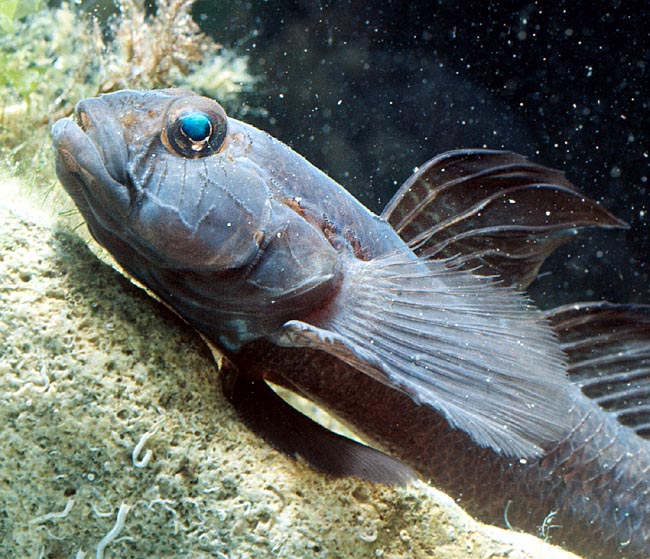 Head has on the sides a drawing with pores and mucous canals. It adheres to rocks with a ventral sucker © Mazza

It can be found in one metre of water, among the seaweeds in the backwash zone, but also at more than 60 m of depth on the muddy bottoms, in the lagoons and the estuaries. In short, it goes everywhere it can find what to eat, but does not go upriver.

With its 18-20 cm of length, it stands among the greatest members of the genus Gobius.

The head is massive with protruding eyes and a characteristic drawing on the sides formed by pores and mucous canals. The lips are fleshy and the jaws have, on parallel rows, small conical teeth. But the area of the head, where they are very small, the scales are proportionally very big with the free edge finely indented and covered by protective mucus.

The ample pectoral fins and the caudal are rounded and the ventral appear merged, in a sort of a sucker, typical of the gobies, with which they adhere to the stones in the backwash zone.

The more or less dark and marbled livery shows always a small black area in the higher part of the first dorsal fin. 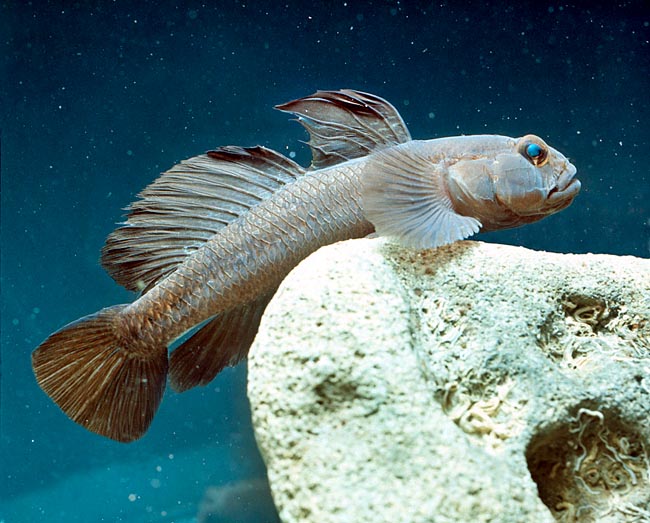 After hard fights the male watches the nest for 7 days, but the female betrays him with the young © Mazza

The breeding time begins in March and lasts all summer long. The males create or dig a hole suitable for the reproduction emitting sounds for attracting the females which may spawn even 6 times per year. When they are too numerous they open the opercula and clash in noisy fights with bites. The juveniles run away, but then often mate on the sly. The eggs are elongated, club-shaped, and are stuck in the nest, closely watched for seven days by the official spouse.

The larvae, which upon the birth measure already about 3 mm, go up towards the surface for a planktonic period of life. They begin their benthic life when they reach the length of 9-10 mm. They have a life expectancy of 5 years, but they reproduce only starting from the second year. This explains why the populations show, despite all, a moderate vulnerability risk, of 33 over 100.