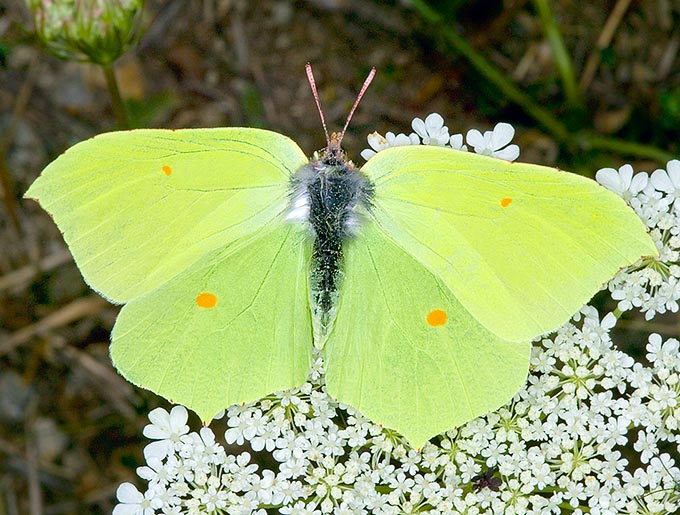 Common brimstone (Gonepteryx rhamni Linnaeus, 1758) belongs to the vast order of the Lepidoptera and to the family of the Lepidoptera ed alla famiglia dei Pieridae a rather vast group that includes about 1500 species of butterflies of various size, present in every continent and that in Europe includes the so-called “white” and that is the cabbage butterflies, the small cabbage whites, the napis and the sinapis.

The common brimstone along with the species of the genera Colias and Anthocharis, are the only European pierids having colours different from the white on the wings.

The common brimstone is a butterfly common in the palearctic area and its sudden appearance by the end of the winter is considered as a forewarning sign of the spring approaching.

In fact it is one of the most precocious butterflies because the adult hibernates in the state of imago hidden in cavities of trees or in crevices but also between the foliage on the soil and reacts promptly at the first spring warmth often defying rather anomalous temperatures for a winged insect. Often, especially the males, are seen flying by the first warmth already at the end of January/beginning of February and then disappear suddenly as they have appeared, when the bad weather comes again.

This butterfly is constantly present in the European tradition and still now is the most described and represented at school level as well as in the popular folklore. It is thought that the English term butterfly comes from “butter coloured fly”, referring rightly to the colouration of the common brimstone, much similar to the yellowish colour of the butter.

The common brimstone has a particular shape of the wings with some angles allowing it, when resting with the wings folded, to camouflage perfectly with a leaf. The more greenish colour of the lower face helps it even more in this task.

The etymology of the scientific name recalls rightly this particular. The genus Gonepteryx comes from the Greek “gonia” = angle and “pterux” = wing, literal description of the particular angular shape of the wings; and the species rhamni refers to the Rhamnus catartica, the buckthorn, one of its preferred host plants. The common European names are: Common brimstone in English; Zitronenfalter in German; Llimonera or papallone in Spanish; Citroenvlinder in Dutch; Citron in French. 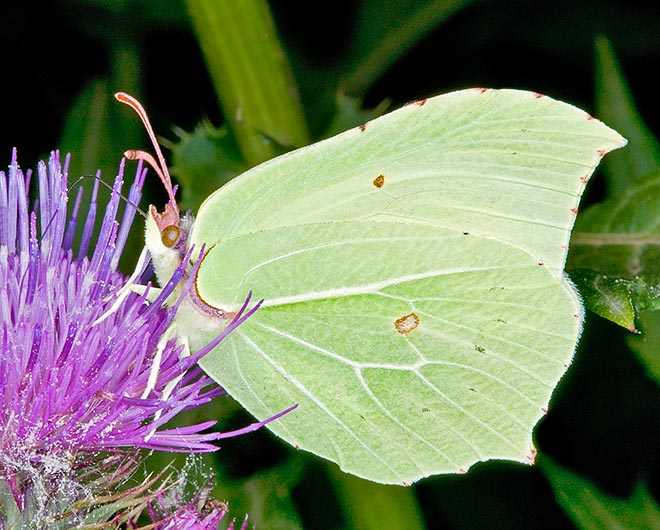 The common brimstone is a butterfly diffused all over Europe, North Africa and in Asia along a temperate belt up to the Far East. Though present in Siberia, is absent in the extreme north areas of the Scandinavian Peninsula and of Scotland and, strange enough, in the island of Crete.

In the southern area of its range this species often coexists with the Gonepteryx cleopatra its fierce competitor with which stands a hard territorial antagonism. It is a butterfly much similar to the common brimstone in the behaviour as well as in the biology, but very different in the colouration, as it has, well evident on the fore wing, up to almost cover the entire face, a big orange spot well visible when flying.

The common brimstone lives in the most different habitats, being a continuously moving butterfly, from the hilly slopes, to plain lawns, from woody lawns to flowered gardens. It is not found at high altitudes probably because they areas unsuitable for the hibernation even if during its wandering it may be sighted up to the 2000 m. It loves very much to feed on the flowers of Cirsium, Taraxacum, Centaurea and Succisa but does not disdain any flower in order to satisfy its insatiable appetite. Its distribution is however related with the presence of the host plants.

The common brimstone is a butterfly of remarkable dimensions and may reach the 70 mm of wingspan. The male has both wings of a nice sulphur yellow colour with a small orange spot in the cell of both wings. The female, on the contrary, is white with a suffused greenish halo and always with the small orange spot. The body is blackish and covered by a thick down that faithfully repeats the colour of the wings. As said before, the wings have a particular angular shape with much pronounced apices, a pseudo tail on the margin of the rear wing and accentuated roundings on the margins of both wings. 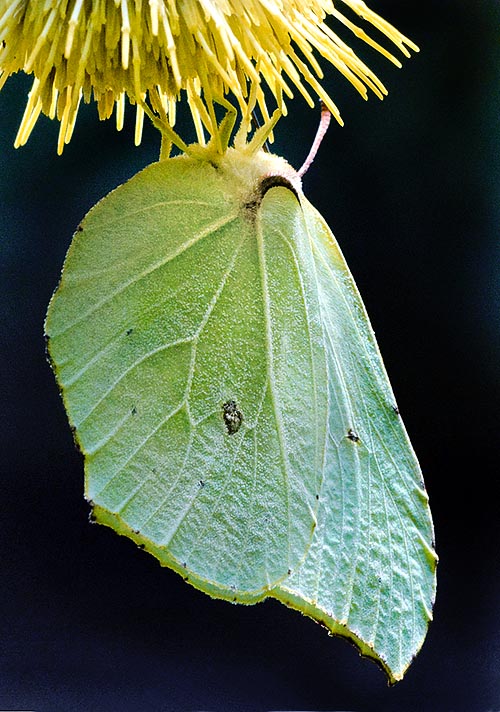 Head lost? No, it’s hidden by the wings while sleeping, hung like a leaf © Giuseppe Mazza

Besides being one of the most long-lived butterflies in the palearctic, in fact it flies from July up to the following late spring often exceeding one year of age, it is also a very strong flyer, reason why it needs a continuous feeding in order to get the necessary energy for surviving to such an effort. Furthermore, by the end of summer these butterflies are obsessed by the necessity of assimilating energy reserves for getting through the winter.

Oddly enough, it has been noted that the most the winter is cold and dry, the higher is its survival, in fact these butterflies face and exceed often glacial temperatures, whilst, if these last are milder, their metabolism does not turn off completely and burns the energies accumulated before the completion of the winter period, thus causing their premature death.

Already by the end of the month of August the period of retirement starts and this will take them, later on, to the true hibernation. It often shelters in clusters of ivy, in brambles and on evergreen essences and then finds more covered shelters when the bad season approaches.

In winter it is possible to find even if alive but completely frozen specimens.

The common brimstone is a monovoltine butterfly. It lays the eggs mainly on two essence to which is particularly linked: the Buckthorn (Rhamnus cathartica) and the Alder buckthorn (Rhamnus frangula).

Particular is the behaviour of this butterfly during the courting and the consequent coupling. The female flies vertically at tremendous speed high in the sky pursued by the male up to almost disappearing from the view and then get down together and then hiding into the grass where the mating takes place.

The eggs are laid singly on the lower face of the leaves of the host plant after that the female has carefully and attentively selected the part of the plant chosen for this operation. It spends often long time looking for the suitable placement before laying preferring isolated parts of the plant not subject to any disturbance. At times are found small groups of eggs but these are thought to be fruit of depositions of more females or of eggs of the same female who has come back on the same location for laying again other eggs. The eggs are pale green turning later on yellow after a few days. The caterpillar gets out after about two weeks of incubation.

Although the camouflage of the caterpillar is remarkable, seen that it perfectly imitates the green colour of the leaves where it lives, it is rather easy to find it because it stays on the upper page of the leaf and when resting keeps a position which sees the fore part of the body practically standing vertically to the leaf on which is staying. Furthermore, the marks left on the eaten leaf are a further sign of its presence. The caterpillar is completely green without any drawing on the body. After four moults and about four weeks of feeding, the caterpillar leaves its position to pupate hung from the lower face of a leaf or directly on a small branch. The pupa is extremely camouflaged and has a shape recalling that of a withered leaf curved on itself. When the maturation is completed, the chrysalis is hyaline and transparent and allows easily a glimpse the formed butterfly inside. The flying off takes place after about two weeks.