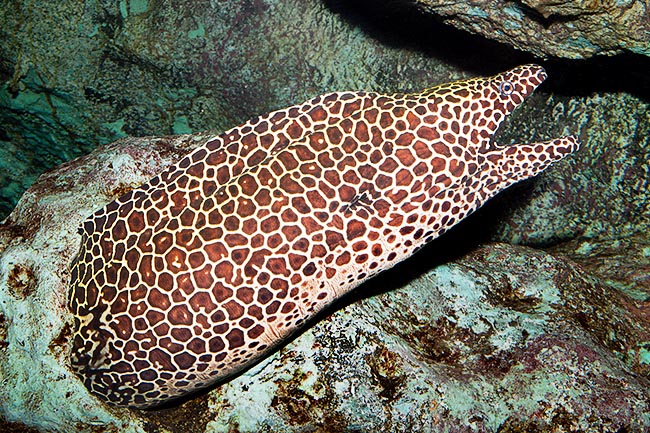 Uncommon in aquariums the beautiful Honeycomb moray (Gymnothorax favagineus Bloch & Schneider, 1801) belongs to the class of Actinopterygii, the fishes with the rayed fins, to the order of Anguilliformes and to the family of Muraenidae.

The name of the genus Gymnothorax comes from the Greek “gymnos” = naked and from the Latin “thorax” = thorax; this fish in fact has a bare thorax, seen that it has no scales.

The name of the species favagineus comes from the Latin “favus” = honeycomb, the well known bees constructions, and from “genero” = to generate, create. In fact, it is a fish which in its livery has recreated the cell-pattern of the honeycombs.

It is present in the tropical waters of the Indian and Pacific oceans. Just to give an idea of its distribution, we find it from South Africa and Madagascar up to the Red Sea and the Arabic Sea, to the Seychelles, the Maldives, in India, in Sri Lanka, the Andaman Islands, in Malaysia, Indonesia, Australia, New Guinea. Northwards, it has colonized the Philippines, Taiwan and the southern part of Japan. Southwards, it stops at the Australian Great Barrier Reef.

It lives among the madreporic formations, on the precipices of the reefs and on the cracks of the coastal rocks up to 50 m of depth, but also in brackish waters. 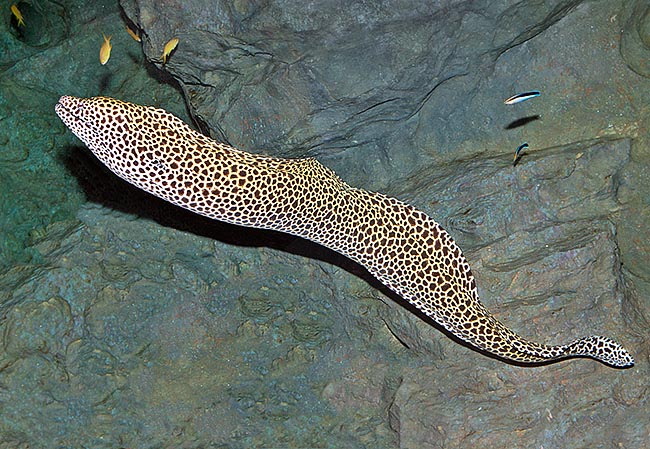 It is a big moray that can reach the length of 3 m and the weight of 18 kg. The dorsal, caudal and anal fins are merged to form a unique long cutaneous crest on the back. As customary for the morays, the ventral fins and the caudal one are absent. The body, serpentiform, has no scales, but is protected by slippery mucus allowing the animal to slip in the narrowest locations. The four nostrils, the two fore ones shaped like a small horn, and the two on the rear, confer the animal an exceptional sense of smell which compensates the poor eyesight. The branchial orifices are reduced to simple holes.

The mouth, with an enormous opening, shows also on the palate rows of sharp or hooked teeth for holding the preys. On the yellowish background, stand out countless brown or black spots, present also inside the mouth, which create with their geometric contours the typical honeycomb drawing.

The Gymnothorax favagineus is a night predator hunting in ambush, seizing the fishes and the cephalopods passing close. When it seizes a big prey, like a pulp, it adopts a particular technique for swallowing it. It creates a knot on the tail and scrolls it along the body until the tentacles are immobilized. In this way, it can open the mouth, turn the head and calmly tear the victim. It is a species not attacking the man, but if disturbed it may become dangerous. It hits with force and seen the size the hunters in apnoea risk to be held under water and to die drowned. 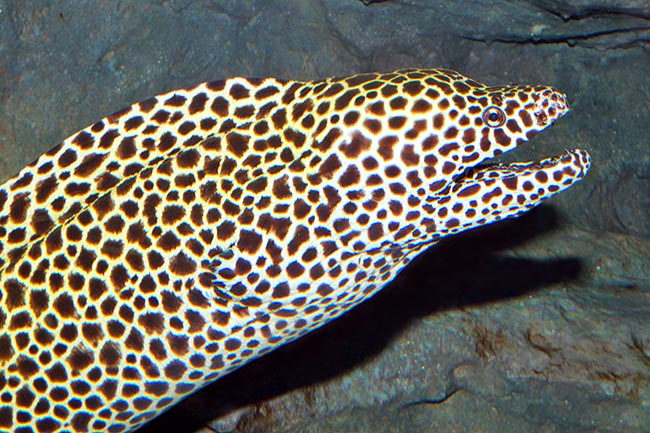 The big specimens are inedible as they cause the ciguatera, a serious food intoxication © Giuseppe Mazza

In the bites there is no venom, but the wounds convey dangerous pathogen agents for the alimentary substances which decay between the teeth.

Furthermore, the flesh of the oldest specimens is toxic because the honeycomb moray accumulates, day after day, in its tissues the toxins of the herbivorous fishes nourishing of poisonous seaweeds. He who eats it risks therefore a serious alimentary intoxication called ciguatera.

The Gymnothorax favagineus often live in symbiosis with some shrimps which, in exchange of food leftovers, clean its teeth and remove the parasites of the skin.

The eggs are pelagic and the larvae, called leptocephali, are transparent, shaped like a leaf of willow, with very small head. This is a character of primitivity in the world of the fishes.

This larval stage is very long and may last even one year. The growth is slow and the species is nowadays considered as endangered as having a vulnerability index of 84 on a scale of 100.