The Grey moray (Gymnothorax griseus Lacépède, 1803) belongs to the class of Actinopterygii, the ray-finned fishes, to the order of Anguilliformes and to the family of Muraenidae.

The name of the genus Gymnothorax comes from the Greek “gymnos” = naked and from the Latin “thorax” = thorax; in fact, a fish with bare thorax, seen that it is scaleless. The name of the species griseus = grey in Latin, refers to its colour.

It lives in the tropical waters of the western Indian Ocean. Indicatively, we find it from South Africa and Madagascar up to the Red Sea and the Arabian Sea, the Réunion islands, Mauritius, Seychelles and Chagos.

It lives in little deep waters up to a maximum of 40 m. 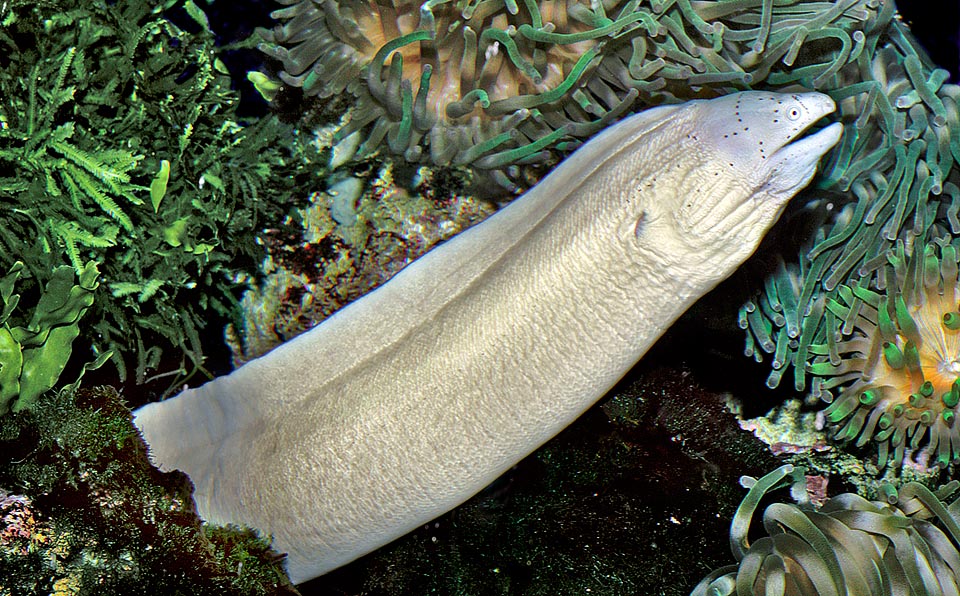 The eyesight is modest, compensated by a perfect sense of smell thanks to two fore nostrils and two rear ones. The first, as usual at the extremity of the snout, have the shape of a small tube and point down; the second, just visible at the level of the eyes, look on the contrary upwards. This is a way for finding the preys even at dusk, when this species gets out for hunting.

The mouth, big if compared to the head, shows two rows of conical teeth on the upper jaw and only one row on the lower one. Also the palate is armed, with two longer teeth for holding the preys.

The background colour, pale lilac grey, shows at times light marbled drawings with brown hues. On the head we note some typical black dots lined following a precise scheme which has granted it the French name of “Murène tatouée”, that is, of tattooed moray. 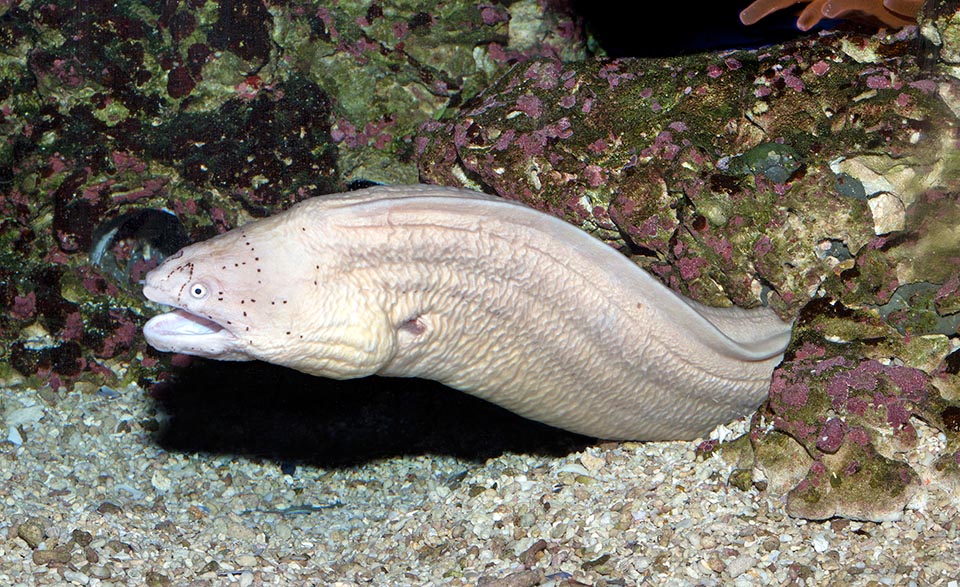 Its vision is modest, replaced by a perfect smell thanks to its two fore and rear nostrils. Doesn't surpass 65 cm and is little endangered if compared to other morays © Giuseppe Mazza

The grey moray nourishes of small fishes and crustaceans that swallows whole, like the serpents, seen that it doesn’t have teeth suitable for the mastication.

It is a simultaneous hermaphrodite species, which means that every individual may behave, depending on the cases, as male or female. The eggs are pelagic and the larvae, called leptocephali, transparent, shaped like a leaf of willow, have very small head. This is a character of primitivity in the evolution of the fishes typical of the Anguilliformes. The juveniles often do live together in the same den.

Less at risk than the other morays, it has a vulnerability level of 41 on a scale of 100, with populations which, if necessary, may double in 1,4-4,4 years.