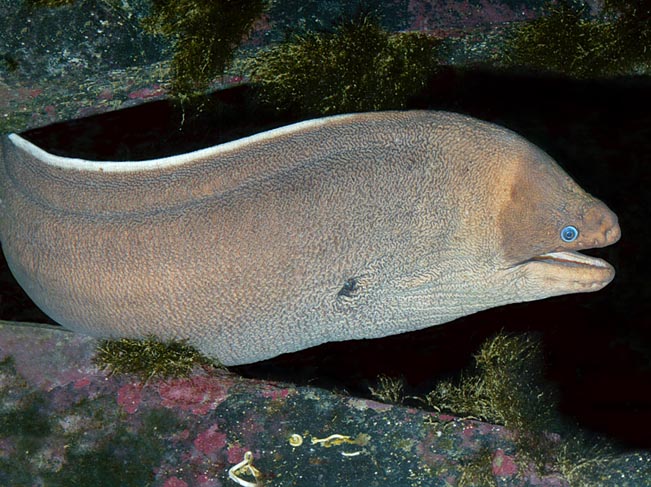 The Brown Moray (Gymnothorax unicolor Delaroche, 1809) belongs to the class of Actinopterygii, the ray-finned fishes, to the order of Anguilliformes and to the family of Muraenidae, which counts about 200 species and 15 genera present in the temperate and tropical waters of all the world.

The etymology of “gymnothorax” comes from the Greek “gymnos” = naked and from the Latin “thorax” = thorax. It is, finally, a fish with bare thorax, seen that it has no scales.

The name of the species “ unicolor ” = with only one colour, in Latin, refers to the livery substantially brown without any drawing.

It is present in the whole Mediterranean and in the adjacent zones of the eastern Atlantic: Portugal, Morocco, Canary Islands, Madeira, Cape Verde and Acores.

It is a benthic species, relatively rare, living in the crevices of the rocks, with a preference for the islands and the precipices, usually between the 10-80 m of depth.

The body, serpentiform and without scales like all morays, measures on average 80 cm, but in 1967, in the Ogliastra islets, along the eastern coasts of Sardinia, they have fished a 110 cm specimen weighing 1,8 kg. 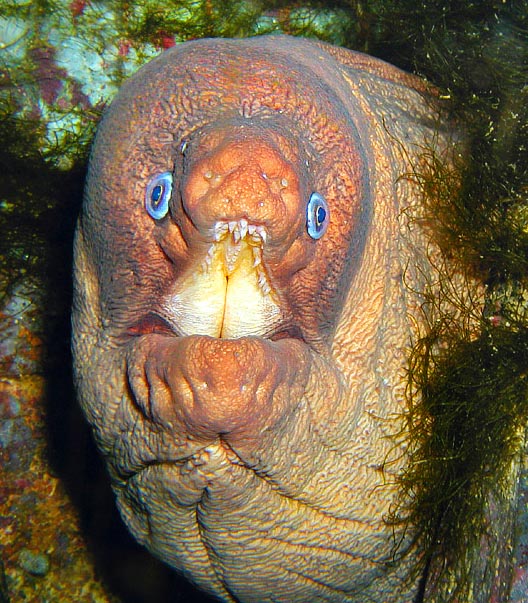 The mouth, ample and horizontal, shows several teeth, molariform, caniniform and hooked for holding the preys, placed on the jaws and on the vomer.

The livery is uniformly reddish brown, monk’s frock colour, with a sort of a darker mask on the head, tall and massive. The edge of the cutaneous crest is whitish.

The brown moray lives solitary. It spends the day hidden and gets out at dusk looking for crabs, cephalopods and gastropods which it easily finds, also in the complete darkness, thanks to its very fine sense of smell.

Being a rare species, the encounters with the divers are an exceptional occurrence. It is not aggressive but is territorial, and when obliged knows how to defend itself. Pain and tears apart, the bites are real injections of pathogenic agents for the alimentary substances decomposing between the teeth, and like all morays the mucus secreted by the skin is toxic.

It is an oviparous species, but little is known about its reproductive modalities.

The larvae, called leptocephali, are transparent and shaped like a willow leaf, a character of primitivity in the fish’s evolution history.

They nourish of plankton. The young come to life as hermaphrodite and then, while growing, under the influence of habitat factors, one of the two sexes takes over and fixes forever. It seems that when the populations are under stress the number of the females increases.

Having a vulnerability index of 58 on a scale of 100, the species is already considered as endangered.