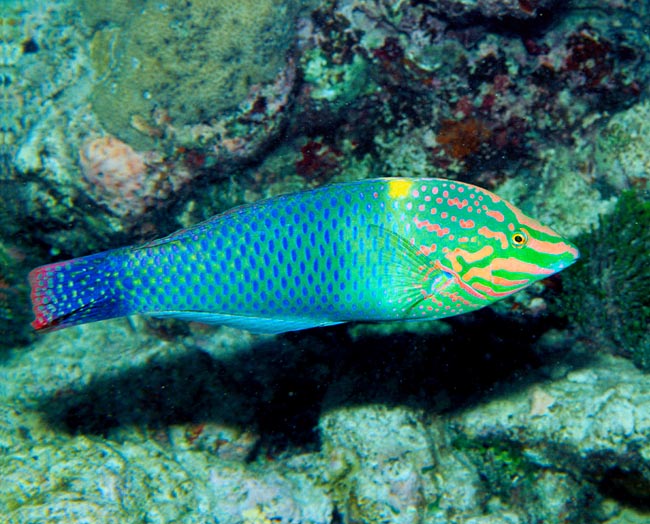 By night and if endangered, Halichoeres hortulanus disappears under the sand © Giuseppe Mazza

The colorful and wriggling Checkerboard wrasse (Halichoeres hortulanus Lacépède, 1801) belongs to the class of Actinopterygii, the ray-finned fishes, to the order of Perciformes and to the great family of Labridae, rich of about 60 genera and 500 species.

The name of the genus comes from the Greek “hals” = sea, salt, and “choiros” = piglet, because it stands among the biggest wrasses and when it stumbles into the nets is consumed by the local people.

The name of the species “hortulanus” = gardener in Latin, refers to the fact that often it turns up the sand and the fragments of coral, ploughing the bottom while looking for preys.

We find it, indicatively, from South Africa up to the Red Sea and the Arabic Sea, at the Seychelles, Mauritius, Réunion, Maldives, in India, Sri Lanka, Thailand, Australia, Indonesia, New Guinea, Micronesia, Philippines, Taiwan and China up to southern Japan. Eastwards, it has colonized Kiribati, Tonga, Samoa, Marquesas Islands and Tuamotu. Southwards, in the Pacific, it reaches the Great Barrier Reef and the New Caledonia.

It lives in calm and shallow waters, never under the 30 m of depth, in the lagoons, the seagrass meadows and the madreporic formations.

The livery, quite variable depending on the zone, the age and the sex, has the following characteristic tracts: a series of pink stripes on the head, broken after the eye, ending in small dots; a showy yellow spot on the back at the beginning of the dorsal fin; and a blue or black checquered drawing in the second half of the body. The background colour is greenish and the final part of the tail, initially blue with pale small dots, is often red.

The checkerboard wrasse nourishes of gastropods, bivalves, crustaceans and sea urchins. It lives solitary and by night, or in case of danger, it disappears in a flash under the sand.

It is a protogynous hermaphroditic species, which means that the juveniles are all females and may be later on transform into males. Also thanks to this fact, the populations, decimated by the events are capable to double their number in less than 15 months, and seen that this is a species having very various alimentation, therefore insensitive to the degradation of the reefs, being too cumbersome for the domestic aquaria and little fished for alimentary purposes, it has a very low vulnerability index: just 21 on a scale of 100.

Halichoeres hortulanus was last modified: May 3rd, 2022 by Giuseppe Mazza