The Hatiora gaertneri (Regel) Barthlott (1987) is native to the humid mountain forests of south-eastern Brazil (states of Paranà and Santa Catarina), in particular to the forests of Araucaria, between the 400 and the 1.300 m of altitude.

Much ramified unarmed epiphytic species, with a usually hanging appearance, it has usually flat, oblong or elliptical segments truncated at the apex, 4-7 cm long and about 2 cm broad, of a green colour, at times initially reddish, with slight indentations at the edges in correspondence of the areoles; at times the segments may have 3 to 5 marked ribs.

The areoles are small, initially equipped with short and thin yellowish-brown bristles, as well as the great oblong apical areola from where the flowers and the new segments develop.

The flowers have an angled ovary, are funnel-shaped, stellate, symmetric (actinomorphic), 4 to 5 cm long and 5 to 7 broad, in number of 1-3 of a scarlet-red colour. They are produced in profusion, from one to three, at the apex of the terminal segments, by early spring, roughly, therefore, in the Eastern period in the northern hemisphere, from which do come many common names; they last, each one, 4-5 days, but the plant goes on blooming for some weeks. 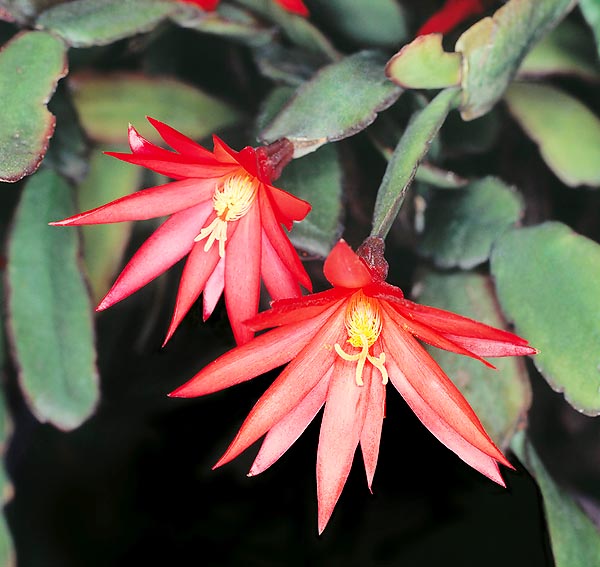 The fruits are 1,5 cm oblong, of a reddish brown colour and contain brown seeds of about 1 mm of diameter, but for the fructification the presence of another plant is needed, not obtained by division of the same, which has to furnish the pollen; as a matter of fact the flowers, even if they are hermaphrodite, are self incompatible. It reproduces very easily by cutting, possibly formed by two segments, well dried for some days and placed to root on a sandy substratum at 20 °C.

It easily hybridizes with the other plant belonging to the genus, the Hatiora rosea, which flowers by the same time, with which it has originated a huge number of cultivars, whose scientific name is Hatiora x graeseri, all commonly called in the northern hemisphere (in the various languages) Easter cactus; the fact that the two plants and their hybrids are all known under the same common name is causing lot of confusion.

The plant is not frequent in cultivation, whilst its numerous hybrids and varieties have acquired by the second half of the last century a remarkable importance, also economic, in particular in the northern hemisphere, as flowering plant offered during the Eastern time.

The plant and its hybrids have the same requirements of cultivation.

They need high diffused luminosity, but not direct sun, and sub-acid, perfectly draining and much aerated substrata, being the roots very sensitive to the rottenness caused by humidity stagnation, substrata which may be formed by common garden earth, mould of leaves or, missing this, rough peat, and siliceous sand, or agri-perlite, in equal parts, in case with the addiction of crushed stone for improving the draining.

Their permanent collocation in open air, in shady position, as epiphytes on the trees or in hanging pots, is limited to the climates characterized by high atmospheric humidity and winter lowest temperatures usually over the +10° C, even if, when dry, they can bear for very short time temperatures just under the 0 °C.

Elsewhere, they are to be cultivated in pot for sheltering them in winter, moving them to the open spaces, if possible, from late spring to autumn. In summer, they are to be regularly watered, allowing only the first layers of the compound to dry up between the irrigations and nebulising with non calcareous water in case of presence of too dry air; in winter the irrigations are to be less frequent, but keeping the compound always slightly humid and with lowest temperatures close, but not inferior, to the +10° C; this cooler and drier period facilitates an abundant flowering.

After the appearance of the floral buds, the displacements are to be avoided as well as sudden changes of the local conditions which might cause their fall. The fertilizations, light, are to be done about twice a month, from the appearing of the buds till autumn.

Hatiora gaertneri was last modified: May 8th, 2018 by Giuseppe Mazza