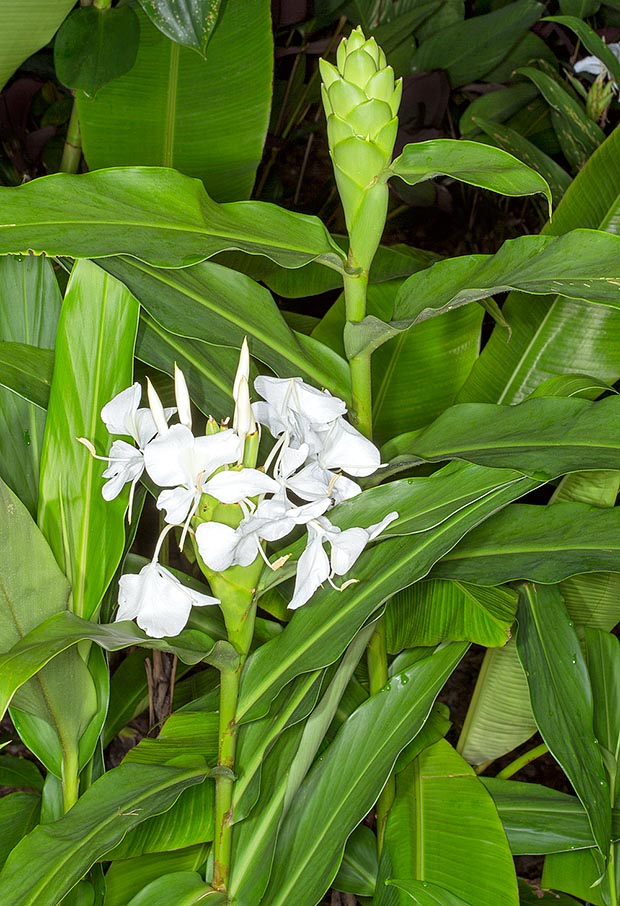 The species is native to Arunachal Pradesh, Assam, Bhutan, China (Guangdong, Guangxi, Hunan, Sichuan and Yunnan), Darjeeling, India, Myanmar, Nepal, Sikkim, Sri Lanka, Taiwan, Thailand and Vietnam, where it grows at the borders of the humid forests, in swampy areas and along the banks of lakes and water streams, from the sea level up to about 3000 m of altitude.

The name of the genus is the combination of the Greek adjective “ἠδύς” (edys) = sweet and of the substantive “χιών” (chion) = snow, with reference to the colour of the flowers of the Hedychium coronarium, the type species; the specific name comes from the Latin “coronarius, a, um” = of crown, because of the flowers used for realizing garlands.

It reproduces by seed, that has a short lasting germinability, previously kept in water for two days, in draining loam maintained humid at the temperature of 22-24 °C, with germination times of 2-3 months or more, but usually and easily by division in late winter.

Species of easy cultivation amply utilized as ornamental thanks to the candid scented flowers in all tropical, subtropical countries where often has naturalized becoming in some instances invasive, and warm-temperate; it seems that it can bear at level of rhizome, if well mulched, temperatures up to about -10 °C for a very short period. It requires an exposition in full sun or a slight shade and is not particular about the soil, but grows best in the fertile ones maintained almost constantly humid; in the climates with dry summers, like the Mediterranean ones, needs therefore frequent and abundant waterings; useful are the fertilizations with balanced products. 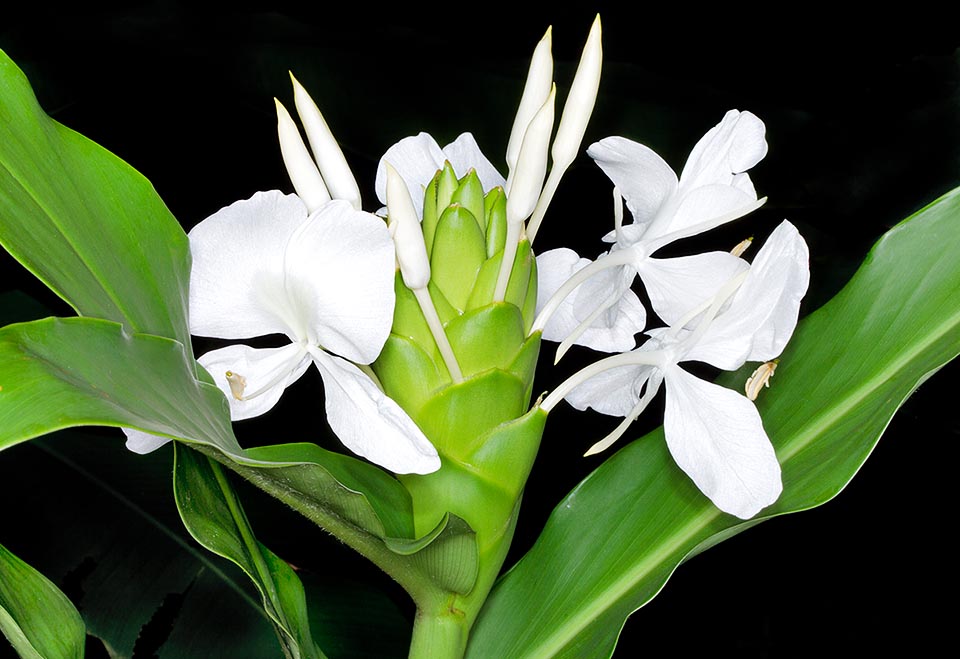 Despite being an exotic species, in Cuba, where it has naturalized in vast areas, has been chosen as national floral symbol. The flowers, in the origin countries as well as in many countries where has been introduced, are utilized as decoration of the hairs and for making garlands. The stems contain about the 45% of cellulose and are utilized in the paper production; the essential oil extracted from the flowers is employed in the perfume industry.

Since remote times the species is utilized in the traditional medicine for various pathologies; laboratory studies have revealed in the extracts of various parts of the plant the presence of bioactive compounds with interesting analgesic, antiallergic, anti-inflammatory, antitumoral, anti-hypertensive and hepatoprotective properties which might be used in the official pharmacopoeia.