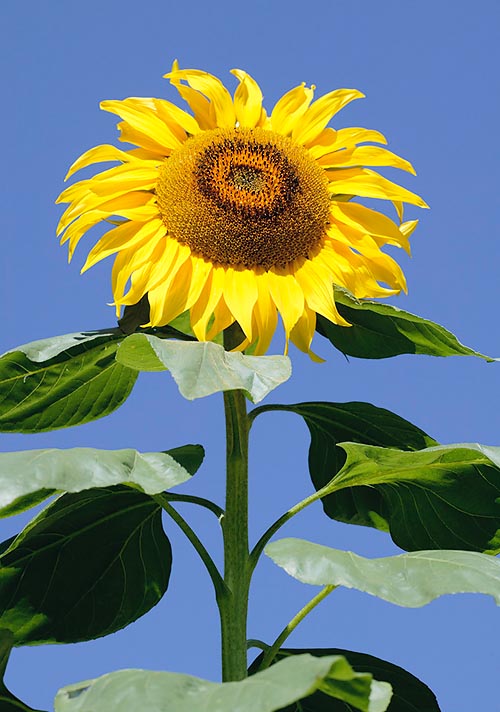 When young, the Helianthus annuus flower head follows the course of the sun © Mazza

The name of the genus is the combination of the Greek words “élios” = sun and “anthos” = flower, with obvious reference; the Latin name of the species “annuus” = annual, refers to its vital cycle.

The Helianthus annuus (1753) is a very variable annual herbaceous plant with taproot, which can reach great depths, and an ample apparatus of superficial capillary roots, and therefore in condition to make the most of the nutritive substances as well as the water resources, even if limited, at various depths, which render it cultivable on a vast variety of soils and resistant to lacks of water.

It has an erect, shaggy stem, ramified at times, of green colour, from one to three metres tall, in some cases even more, with a diameter of 3-6 cm. The leaves, usually alternate on a variably long petiole (2 to 20 cm), are from ovate to cordate, 10 to 50 cm long and 4 to 40 cm broad, with a rather hispid lower page and at times glandulous (spotted with glands secreting an often viscous substance) and indented margins.

The 1 to 9 inflorescences, on a 2-20 cm long peduncle, are the typical flower heads of the Asteraceae formed by a crowd of sessile flowers spirally inserted on a roundish base (receptacle), surrounded by an almost hemispheric involucre, with a diameter usually standing between the 2 and 4 cm but which, in some instances, may reach even the 20 cm. The flower head of the Helianthus is often indicated with the term of calathid. 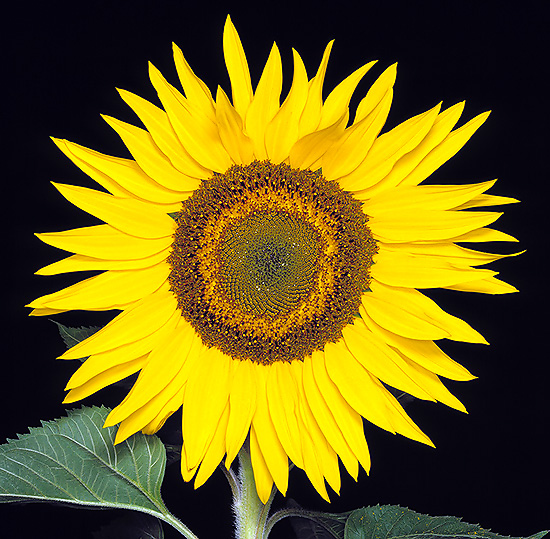 More than a flower a bunch of them. The petal-like outer ones serve to attract the bees © Mazza

The involucre is formed by 20 to 100 lanceolate-ovate bracts, 1-2,5 cm long, with pointed apex, usually ciliated margins and dorsal surface usually shaggy and glandulous.

The flowers of the outer ring, called ray florets, in number of 16 to 30 or more (in some case more than 100), have a 3-6 cm long and 2-3 cm broad corolla, formed by five yellow petals united together.
The ray florets are sterile and have the function to attract the attention of the pollinator, like the petals of a single flower.

Inside the ring are 150-1000 fertile flowers, called disc florets, with a five-lobed tubular corolla, 5 mm long, reddish, at times yellow.

The fruits, containing one seed only and called achenes (or, more correctly, cypselae) in the Asteraceae, are obovoid, flattened, 4-10 (15) mm long, of variable colour (white, black, black with white stripes, brown).

The pappus, the modified calyx of the flower surmounting the fruit, is formed by two lanceolate scales, about 3 mm long and by 0-4 obtuse scales, long about 1 mm.

The pappus has the function to help its dispersion.

In the wild, the male organs in the disc florets, ripe before the female ones, the stigmata, this behaviour (protandry), which is one of the characteristics, even if not exclusive, of almost all the Asteracae, renders the plant self-incompatible and therefore necessary the crossed fecundation. 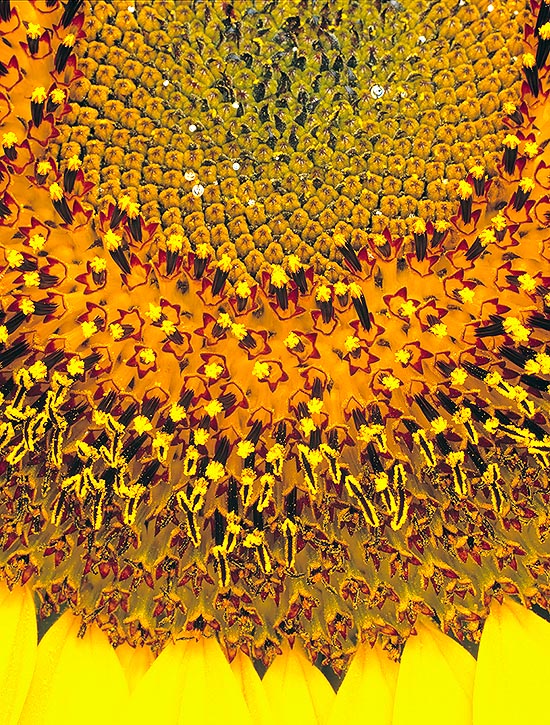 In the cultivated varieties, on the contrary, we find a high rate of self-compatibility; the flowers are pollinated by insects, first of all the bees.

It reproduces by seed, the optimal germination temperature is of about 8 °C, even if it can already begin at 4 °C, the blooming starts by around the 70th day and, depending from the conditions of cultivation and the climate, the whole vital cycle of growth may last from 100 to 180 days.

It easily self-disseminates, so much that it has naturalized in many parts of the planet.

The sunflower and the lettuce (Lactuca sativa) are by far the most economically important species of the family of the Asteraceae.

A characteristic which has always stimulated the attention on this species, as shown by the many common names in the different languages, is that the leaves and the flower head in the initial phase, till when the ray florets have not fully developed, follow the apparent motion of the sun.

This behaviour, called heliotropism, is present in several other species, but is particularly evident in the sunflower.

By the morning, flower head in bud and leaves face east, during the day, they rotate till when the face west by the sunset, during the night the reverse rotation takes place so that the following morning they are again facing east; when the ray florets open the movement of the flower head stops and remains, usually, facing east.

This movement, which has the aim to allow the leaves and the forming flower heads to get the maximum solar radiation, is due to proteins which are sensitive to the blue component of the solar radiation, which induce a different distribution of the auxins, growth hormones, which concentrate in the cells placed in the part in the shade, causing a greater elongation in respect to those getting the light. This asymmetric enlargement of the part in the shade causes the leaves and the flower head to turn towards the sun. During the night, the distribution of the auxins is again uniform, as well as the dimensions of the cells, and we go slowly back to the initial position. 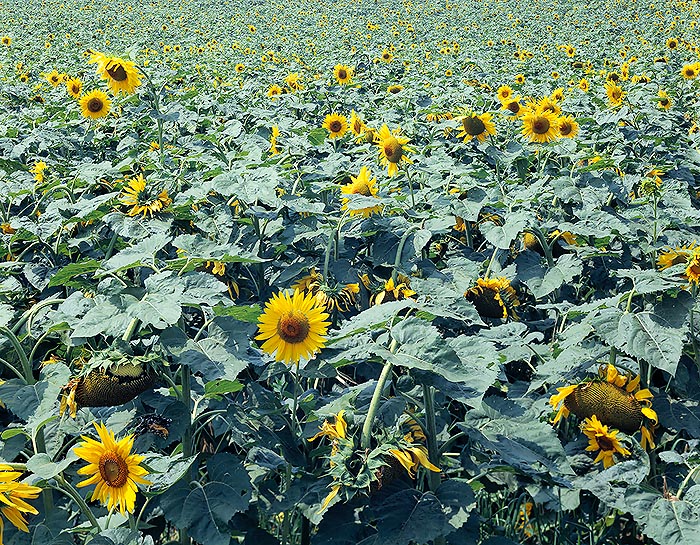 The more productive varieties have huge flower heads which bend downward when ripe due to the seeds weight © G. Mazza

In the movement of the flower head take part the cells of a flexible portion placed just under it, whilst in the case of the leaves, those of the swelling located at the base of the petiole, called pulvinus, or pulvinus motor.

Plant cultivated in the Pre-Columbian era by the natives, in particular in Mexico, where for the Aztecs was symbolizing the God Sun, was introduced in Europe by the beginning of the XVI century and utilized exclusively as ornamental; only from the XVIII century they started its cultivation for the production of the seeds, in particular in Russia, and the selection of the varieties, with the aim to improve the cultivation techniques as well as the quantity and quality of the oil extracted from the seeds.

Only by the end of the XIX century, the cultivation of the sunflower for the production of the seeds was reintroduced in North America by Russian immigrants. Russia is still the biggest producer, followed by Ukraine and China. The varieties selected for commercial purposes usually bear some precise characteristics, first, one single flower head, usually much big (10-40 cm of diameter), with a maximum of thirty ray florets, whilst the disc ones may vary from some tens to some thousands, an average height of 1,6 m, for facilitating the harvesting, and 20 to 40 leaves, the broadest standing between the fourth and tenth node, as they are those more contributing to the formation and accumulation of oil in the seeds. 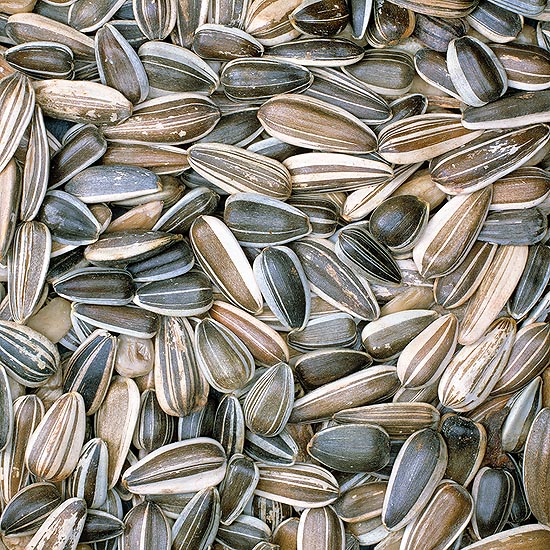 The seeds are precious for oil production, food and medical virtues © Giuseppe Mazza

The blossoming proceeds from the outside of the flower head towards the centre and lasts an average of 10-15 days. During the growth of the fruits, the flower head begins to bend due to the weight, natural tendency which has been accentuated by the selection, so much to by almost facing the ground, what helps in protecting the seeds from the bad weather and from the birds.

For a high yield, are needed: deep and fertile soils, a full sun exposition, irrigations during the dry periods, and targeted fertilizers. The major problems in the cultivation are the fungal diseases (Powdery mildew, Phoma, Sclerotinia, Werticillium, ecc.) and one of the targets of the genetic improvement is rightly the research of varieties provided of a greater resistance from this point of view. The varieties in cultivation divide substantially into two groups depending on the seeds and their contents of oil, those intended for direct consumption (toasted, reduced in flour or as birdseeds), which contain a quantity of oil less than the 40%, with achenes usually of white or brown colour, and those foreseen to its production, which contain a greater quantity of it, with achenes usually black.

The seeds intended for the direct consumption are rich of proteins, minerals, fibres and vitamins, in particular E (about 60mg/100g), with the known antioxidant properties, and B6. The most cultivated varieties are however those aimed for the production of seeds for the oil extraction. The sunflower oil is considered as standing among the best for the human alimentation due to the high contents in unsaturated fatty acids (linoleic and oleic), able to reduce the levels of cholesterol in the blood and prevent cardiovascular diseases, and low of saturated acids (palmitic and arachic). The varieties meant for the production of oil are distinct in their turn in base of its contents of oleic acid: low, average and high; those with low contents have a percentage of linoleic acid standing between the 45% and the 75% and are the best to utilize raw for dressing salads and the production of the margarine. 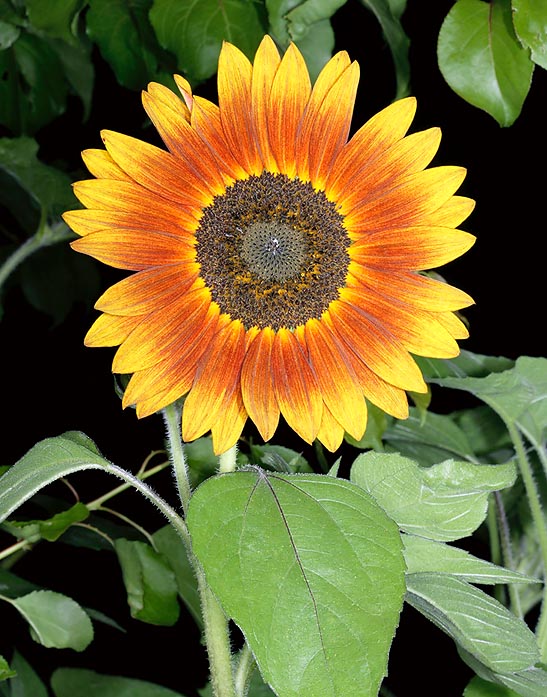 There are ornamental varieties, often hybrid, used in garden or as cut flowers © Giuseppe Mazza

Those with an average content of oleic acid (55-75%) and high (85-90%), are on the contrary considered suitable for frying, because they oxidize less at high temperatures and stand between the most utilized in the food industry. Besides the alimentary field, the sunflower oils are utilized in the cosmetics, pharmaceutical, chemical industries as well as that of the colorants, etc.; whilst the residuals of the extraction are utilized, due to their high contents in proteins, in the animal alimentation.

There is a third group, by sure minor, of cultivated varieties, those with ornamental purpose; these are usually the result of hybridization with other species of Helianthus, they have flower heads of various colours and are usually distinguished depending on the height: dwarf (less than one metre), semi-dwarf (between 1 and 2,5 m) and giant (from 2 to 5 m). Their cultivation is easy and they adapt to several types of soils, preferably deep, but not constantly humid, in full sun; in summer they are to be irrigated regularly, but allowing the ground to dry well between the watering; they too, however, are resistant to long drought periods; the flowers my be utilized as cut, being long lasting. The contact with the hairs of the leaves and the stem may cause dermatitis in the most sensitive subjects.