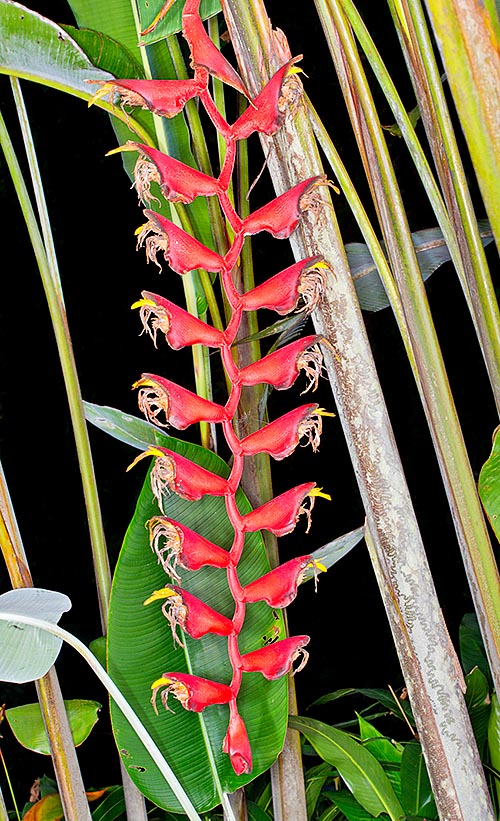 The species is native to Colombia where it grows in the humid forests in partially open inaccessible places on mainly clayey soils.

The name of the genus comes from the Latin “Heliconius, a, um” = of Helicon, mountain sacred to Apollo and to the Muses in the Greek mythology.

The name of the species is the superlative of the Latin adjective “longus, a, um” = long, with reference to the particularly long inflorescence.

The leaves, on an up to about 1 m long petiole, are basal, alternate, simple, entire, ovate-lanceolate with pointed apex and prominent below central nervation, of intense green colour, glabrous on the upper page, waxy below, 2,5-3,5 m long and 0,3-0,5 m broad, and sheathing tubular foliar bases forming an up to about 3 m long pseudo-stem.

The inflorescence, generated on a robust peduncle, is a drooping terminal spike, 2-4 m long, with red wavy rachis, pubescent, and 30-55 bracts with pointed apex and concavity turned downwards, alternate, distichous, coriaceous, of red colour, 10-14 cm long, pubescent, which enclose 11-18 yellow tubular flowers, 5-6 cm long, on a pedicel having an almost triangular section about 3 cm long, which do open in succession.

The bilaterally symmetric flowers are hermaphroditic, with 3 sepals, two of which are merged and one is free, and 3 merged petals, little differentiated each other, 5 fertile stamina and one staminode opposite to the free sepal; the flowers are pollinated by the hummingbirds.

It reproduces by seed, to be previously kept in water for 2 days to soften the tegument, in organic loam with addition of siliceous sand or agri perlite for a 30%, kept humid at the temperature of 26-28 °C, with very much variable germination times, from 1 to 10 months, but usually and easily by division of the rhizomes. Species having a characteristic and long drooping inflorescence and luxuriant foliage, cultivable exclusively in the humid tropical and subtropical climate zones in semi-shaded position on soils rich of organic substance, draining, kept almost constantly humid, but without stagnations. 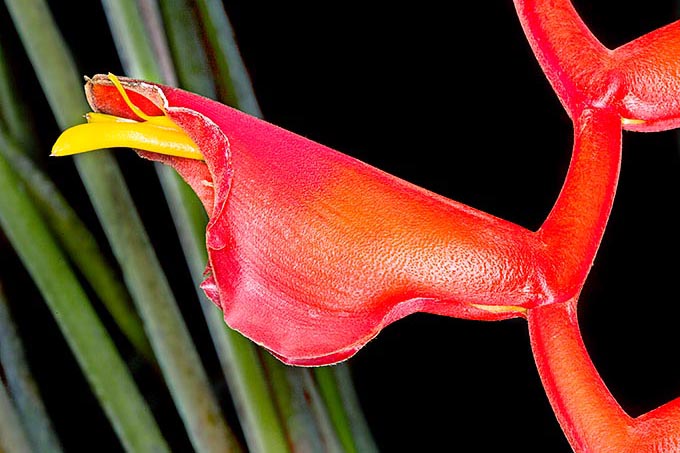 Where the climate does not allow the permanence in open air during the winter months, it may be cultivated in luminous and spacious green- houses or winter gardens, seen the size it can reach, utilizing an organic loam particularly draining and aerated, with high ambient humidity and diurnal temperatures and lowest night ones not under the 16 °C. Watering must be regular and abundant in summer, allowing the substratum to partially dry up before watering again, avoiding the stagnations, cause of easy rottenness, more spaced in winter, but without allowing the substratum to completely dry up, and the fertilizations preferably done with balanced slow-release products with addition of microelements. It is easily subject to attacks of mites and mealy bugs to be treated, in case of serious infestation, with specific products.